The Yanks Are Coming 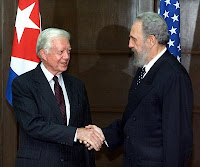 A citizen of Castro’s Cuba, a hotel cook and taxi cab driver, perhaps weary of the slender tips he has been receiving since Castro came to power in 1956 , takes a drag in his cigarette outside the Xanadu hotel, built in the 1920’a by U.S. millionaire Irenee du Pont de Nemours and expropriated by the Castro regime, and tells a Reuters reporter, “Not one person here has anything against the Americans. Let them come to Varadero in their boats or whatever because for us the Americans mean one thing -- more money.”

Cuban blogger Yoani Sánchez speculates whether the “Cuba sí, Yankee no!" proposition is destined for the ash can of history. Supposing the island is to be flooded by U.S. Tourists, she wonders, “What would party militants think if they were told to accept those who until recently they were told to hate?"

Bloomberg news reports that Latin American “leaders” such as the Castro brothers and Hugo Chavez will press President Barack Obama for an end to the Cuban embargo put in place by his predecessor John Kennedy:

“Obama, born six months before President John F. Kennedy imposed the embargo, isn’t prepared to support ending it. Instead, he will likely try to satisfy the leaders at the April 17-19 summit in Port of Spain, Trinidad and Tobago, with less ambitious steps -- such as repealing restrictions on family visits and remittances to Cuba that were imposed by former President George W. Bush.

“Obama said in May he’s taking his cues from predecessor Franklin Roosevelt. Roosevelt’s “Good Neighbor” policy, announced in 1933, temporarily ended a long history of U.S. armed intervention in Latin America and ushered in an era of unprecedented hemispheric prosperity.

“For his effort, Roosevelt was praised in a 1936 calypso, ‘FDR in Trinidad,’ commemorating his stopover in the Caribbean island during a 28-day cruise to Latin America.

“Obama, who has yet to set foot in the region, is already the subject of 20 steel-drum tunes, says Ray Funk, a calypso expert in Fairbanks, Alaska. The most widely played, Funk says, is one called ‘Barack the Magnificent.’”

Breibart news is reporting that Obama has "directed his administration Monday to allow unlimited travel and money transfers by Cuban Americans to family in Cuba, and to take other steps to ease U.S. restrictions on the island, a senior administration official told The Associated Press."

The Obama Chavez Meet And Greet

In mid-April, Obama dutifully showed up at Summit of the Americas in Trinidad, and all went swimmingly.

The autocratic Hugo Chavez of Venezuela, a Castro satrap, presented President Barack Obama with a thirty year old book titled "The Open Veins of Latin America: Five Centuries of the Pillage of a Continent" by Uruguayan writer Eduardo Galeano.

Chavez is something of a bibliophile. During one of his rants at the United Nation, in the course of which he spoke of Obama’s predecessor as the devil, the Latin American autocrat flourished a book by Noam Chomsky called “Hegemony or Survival,” which appeared to have resonated with Obama.

For Latin American wannabe dictators, such books are the ideological equivalent of romantic bodice rippers.

Obama received with some grace a book that accuses nearly all of his modern predecessors with the spoliation of Latin America, and the following day Chavez was featured on the front page of the New York Times, smiling his toothy smile. In an editorial written after Obama signaled that he would permit travel to Cuba by family members, the Times observed that such steps “did not go far enough. We believe the economic embargo should be completely lifted.”

"I think it was a good moment," Chavez said later. "I think President Obama is an intelligent man, compared to the previous U.S. president."

Those who have heard Obama speak in disparaging terms about his predecessor might agree that, at least on this point, the feelings between the two American leaders were mutual,

"I'm not going to speak for Cuba,” Chavez said. “It's not up to me... all of us here are friends of Cuba, and we hope the United States will be, too.”

An entente from president of Cuba Raul Castro, Fidel’s brother, that Cuba would be willing to discuss everything with the United States, including the release of political prisoners, thawed the hearts of some crisis managers in the Obama administration.

Unlike the Aztecs, not mentioned in Galeano book, the United States should not willingly deal in the trading of flesh for profit.