Connecticut's Administrative State Is Not The Real State

After Governor Ned Lamont had signed a budget that Republican leaders in the state House and Senate insist is woefully out of balance and therefore unconstitutional, a eupeptic Lamont said this: “For years, instability in the state’s finances has resulted in slow growth and volatility in our economy — and this budget was adopted with a focus on providing the foundation from which our state can grow,” Lamont said. “When the fiscal year closes, Connecticut will have the largest rainy day fund in history and this budget maintains and grows our reserves, providing reliability and predictability for our taxpayers, businesses, and those looking to invest in our state well into the future.”

Republicans Len Fasano and Themis Klarides are likely right. The Lamont-Looney-Aresimowicz budget depends upon tax receipt projections that are, to put it mildly, fanciful. The budget hawks at CTMirror tell us, “The new $43.4 billion, two-year plan “ recently signed by Lamont “assumes $180 million in income tax receipts that neither Lamont’s analysts — nor the legislature’s — projected in their last joint forecast.”

What does the Republican Party need to do to wrest control of the fate of Connecticut from dominant Democrats who outnumber Republicans in the state by a two to one margin? Pollsters tell us that unaffiliateds slightly outnumber Democrats. Will a change in the party chairmanship do it?

Mayor Luke Bronin of Hartford will be facing six Democrat mayoralty opponents, nearly all of whom insist that the bonds of affection that tie former Governor Dannel Malloy’s chief counsel to the city of Hartford are not, shall we say, fierce.

The lede in a Hartford Courant story ominously titled “Luke Bronin has again promised to serve a full four years as Hartford mayor. Will voters believe him this time?” pretty much sums up the general discontent: “Mayor Luke Bronin said this week it’s his intention, if re-elected, to spend all four years in office, and to support Gov. Ned Lamont in his own potential bid for a second term. But the familiar pledge, given during an interview with The Courant, carries less weight than it did four years ago when the 38-year-old, then a candidate heading into the mayoral primary, made what turned out to be an empty promise.”
Read more »
at June 24, 2019 No comments: Links to this post

Impeachment is the removal of a governmental official from office. When the official is a president duly elected to office in a national vote -- rather than, say, a judge -- cautious politicians tend to be cautious. Pelosi herself is said to be, in most news reports, opposed to impeachment. Newly elected U.S. Representative Jahana Hayes said she would favor impeachment “if the facts merit.”
Read more »
at June 22, 2019 No comments: Links to this post

Republicans To Lamont’s Toll Proposal -- No

Following a meeting with Republican and Democrat leaders of the General Assembly, the question before the house being tolls, Governor Ned Lamont was asked by a reporter how things went.

Lamont answered, “Well, as they say after those State Department summits, I’d say we had frank and honest discussions,” meaning the bipartisan needle had not moved forward.

Republicans, and likely much of the state, do not want tolls. “’No, we don’t support tolls, period,’ said Senate Minority Leader Len Fasano, R-North Haven,” in a CTMirror account. “He added that he believes Senate Democrats would not call a vote on tolls without some Republican support, an assertion Senate Democratic leaders would not confirm or dispute.”

President Pro Tem of the state Senate Martin Looney -- along with Speaker of the House Joe Aresimowicz, both legislative goalies -- was asked to comment on the frank and honest discussions. “’I would not comment on that directly until we have a caucus,’ said Senate President Pro Tem Martin M. Looney, a senator-for-life from New Haven. ‘I do believe it would be preferable for an issue of this magnitude to be bipartisan.’”
Read more »
at June 20, 2019 No comments: Links to this post

The title of the piece in CTNewsJunkie was “Blumenthal, Murphy Seek Repeal of Law Shielding Gun Industry From Consumer Negligence Lawsuits.”

If the law “shielding the gun industry from lawsuits,” the federal Protection of Lawful Commerce in Arms Act, were to be removed, the manufacturer of an illegally acquired firearm used by Frankie “The Razor” Resto sometime ago to murder the co-owner of an EZMart in Meriden, Connecticut -- after Resto’s victim already had handed over to him the demanded cash -- would be at the mercy of rapacious prosecutors such as US Senator Dick Blumenthal.

Governor Ned Lamont, we are told by Christine Stewart of CTNewsJunkie, is about to bump heads with SEBAC union heads authorized to form contracts with Connecticut’s executive department. No need to wonder whose head will break first.

President Franklin Delano Roosevelt solved the problem of the union organization of federal workers in 1937 when, approached by Luther Stewart, president of the National Federation of Federal Employees, to allow collective bargaining, Roosevelt nixed the idea for the best of reasons.

Roosevelt wrote to Stewart, “… the process of collective bargaining, as usually understood, cannot be transplanted into the public service. It has its distinct and insurmountable limitations when applied to public personnel management. The very nature and purposes of Government make it impossible for administrative officials to represent fully or to bind the employer in mutual discussions with Government employee organizations. The employer is the whole people, who speak by means of laws enacted by their representatives in Congress. Accordingly, administrative officials and employees alike are governed and guided, and in many instances restricted, by laws which establish policies, procedures, or rules in personnel matters.”

United Technologies (UTC), yet another home grown Connecticut institution, has flown the coop – this time for Boston, Massachusetts, the state’s chief corporate poacher.


The day after the announcement had been made, the state’s Democrat spinmeisters were busy putting a happy face on the event. We discover from a Hartford Courant piece that pretty much everyone in the state was surprised by the announcement. Political cuckholds are always the last to know when their best laid plans are torn asunder.
Read more »
at June 11, 2019 No comments: Links to this post

Democrats put off a vote on tolling during the recently concluded legislative session because, plain and simple, they did not have the votes to pass a tolling bill.

House Speaker Joe Aresimowicz thought he may have had the votes to pass the measure in the House, but passage was still an iffy proposition.

Mark Pazniokas writes in the Hartford Business Journal, “Aresimowicz’s comments reflect a belief among lawmakers that the Lamont administration botched the rollout of tolls in February, giving Republicans, the trucking industry and others an opportunity to frame tolls as just another demand on residents.”
Read more »
at June 09, 2019 No comments: Links to this post

The reader will find below three self-interviews that are meant to serve as a prologue to a longer piece – “Connecticut Down.”  The first is set a little more than a month after Governor Ned Lamont had been sworn into office; the second is set just before Lamont presented his budget to the General Assembly; and the last is set a day after the Lamont/Looney/Aresimowicz budget was passed by the state Senate.

Someone should nudge awake Connecticut U.S. Senators Dick Blumenthal and Chris Murphy. The FISA warrant used to secure the services of special prosecutor Robert Mueller was defective from the get-go, we learn in a series of stunning opinion pieces in The Hill written by John Solomon. It appears there is an after-story to the Mueller investigation after all, and the second act will almost certainly disappoint the two Trump-slayers.

One of the stories’ ledes probably should garner Solomon a Pulitzer for commentary eye-candy: “The FBI’s sworn story to a federal court about its asset, Christopher Steele, is fraying faster than a $5 souvenir T-shirt bought at a tourist trap.” And the second graph might be a close runner-up: “Newly unearthed memos show a high-ranking government official who met with Steele in October 2016 determined some of the Donald Trump dirt that Steele was simultaneously digging up for the FBI and for Hillary Clinton’s campaign was inaccurate, and likely leaked to the media.” 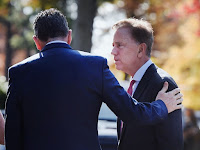 Governor Ned Lamont’s slippage in the polls is not surprising. Former Governor Dan Malloy, now gainfully employed reforming education in Maine, casts a long shadow, and Lamont’s policy prescriptions – including his budget, now on its way to approval by the Democrat dominated General Assembly – do not differ much from Malloy’s in matters of getting and spending.


Some may notice that a new expression, “modernize” and its variants, has made its way into Democrat oratory. Lamont said of his massive sales tax increases, “Look, we’re gonna try and modernize our sales tax structure… In fact, wanna know why sales tax revenues are already up compared to what we had expected” That’s cause of sales tax applying to e-commerce.”

Lamont is a graduate of high-priced colleges. So what’s all this business about “gonna” and “wanna”? Do Harvard and Yale lack speech teachers? The use of the word “modernize” is gonna become an Orwellian catch phrase for “increasing and broadening sales taxes.” This expression may have been hammered out by the smithies hired by Lamont to make his policy prescriptions palatable to the voting public. The Orwellianism may have come from former Malloy campaign coach Roy Occhiogrosso, the Vice President of Global Strategies. Ideas have consequences, and bad ideas have bad consequences.
Read more »
at June 01, 2019 No comments: Links to this post