U.S. Senator Bernie Sanders of the People’s Republic of Vermont -- the nation’s first socialist presidential candidate since Eugene Debs (1855-1926), five times candidate for president and Norman Thomas, a presidential candidate six times from 1928-1948 -- has a hearty dislike, people will have noticed, for “greedy” companies larger than a mom-and-pop-deli. “Greed” is the mud-ball leftist extremists throw at business enterprises that are successful. There are two kinds of businesses: successful ones that make a profit and unsuccessful ones that go out of business. “Greed” is excessive profit-taking, the “excess” to be determined by socialists and progressives who historically have been much in the habit of transferring funds from obscenely greedy “haves” to the importunate and much more numerous “have-nots.”

A Hartford newspaper made Connecticut history when it called unions “greedy” in an editorial. Stubborn union leaders, the editorial pronounced, were perversely refusing to do the right thing: “They still refuse to even talk about, let alone offer, concessions in the unions' platinum-plated retirement and health care benefits package to help Connecticut avert a major budget crisis. We hope that unions do see the light, and quickly. This is the wrong time for greed.”
Read more »
at March 30, 2016 No comments: Links to this post

Democratic Solutions In “The Constitution State”

When Governor Dannel Malloy first came into office in 2011, there were boisterous rejoicings all around. Finally, after two Republican governors and an odd fish, Lowell Weicker, who won the governorship on his own party line, Democrats had a Governor they could call their own. On entering office, Mr. Malloy raised taxes, as had the odd fish before him. Mr. Weicker sired Connecticut’s income tax, after which most editorial pages in the state crowed their hearty approval. Taxes are good, and one can never have too much of a good thing. Whenever a budget deficit appeared on the horizon, Democrats raised their old tattered rhetorical flag: Connecticut does not have a spending problem; it has a revenue problem, the obvious solution to which was and is – tax increases. The Malloy tax boost was the largest in state history. During his second term in office, Mr. Malloy, in concert with dominant Democrats in the General Assembly, repeated his performance. By that time, state union advances had been baked into Connecticut’s budget.
Read more »
at March 25, 2016 No comments: Links to this post

When President Barack Obama arrived in Cuba on Palm Sunday along with his retinue, so large that they displaced twelve journalism students from Central Connecticut University who were dispatched to other quarters fifty miles from Havana to make room for Mr. Obama, Raul Castro, still kicking at 85 years, did not greet the President at the airport. It should be noted before passing on that Communist Cuba under the Castro brothers was never a hospitable place for foreign journalists.

A Cuban acquaintance tells me that the Castro brothers pulled a Queen Elizabeth on the lame duck President: Some mountains will not go to Muhammad. When Mr. Obama visits England later this year, Queen Elizabeth will not attend his arrival in London; instead, the President and his traveling retinue will be transported to Windsor Castle, where he will be received right royally. Monarchs, even when they are decorative rather than functional, retain the privileges of monarchy.

Note: Sad to say, it is becoming increasingly impossible to talk about issues vital to the country without mentioning, if only in passing, leading Republican Presidential candidate Donald Trump, a media sponge far more absorbent than Connecticut’s  own U.S. Senator Dick Blumenthal. Trumps supporters are enthusiastic, but some Republicans are riven with nagging doubts. I have tried in the Q & A format below to say some few things about current presidential nominees, both Republican and  Democratic, always  bearing in mind the useful advice offered by Connecticut’s own Mark Twain: “When in doubt tell the truth. It will confound your enemies and astound your friends.”
Q: Who are the Trump Supporters?

Democrats And The New Economy 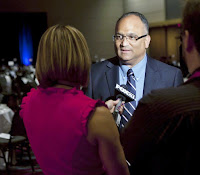 The broad outlines of a Democratic Party campaign strategy begin to appear on the horizon. As may be expected, the strategy is a witch’s brew that includes artful attempts to escape any responsibility for inept policy decisions and awkward attempts to shuck off the disastrous consequences of poor policy on past opposing party predecessors who, fortunately, are now out of business and silent as tombs.

Ducking responsibility is a cagey business involving at least four steps: 1) Decline to accept ownership of the pressing problem; 2) trace the origin of the problem to your predecessor ONLY if he is a member of the opposing party; 3) assert that the roots of the problem are beyond your reach -- i.e. declining revenues in Connecticut are an outgrowth of the national recession, and there is very little we can do about it; 4) transfer ownership of the problem to inept members of the opposing party.
Read more »
at March 15, 2016 No comments: Links to this post 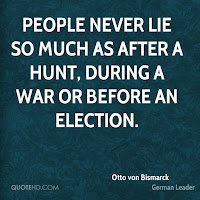 The blithe fairy – whoever he or she is -- that projects job figures in Connecticut is an incorrigible eupeptic.

The state Department of Labor has retrospectively downgraded projected job growth figures for both 2014 and 2015, and many are the politicians in Connecticut who are pretending to be shocked, SHOCKED, at the new and more accurate figures. In 2015, jobs in Connecticut increased by a slender 11,600, not the 22,600 projected by the figure’s fairy at a time when Governor Dannel Malloy and the Democrat dominated General Assembly were putting together their budget. The Department of Labor also has retrospectively downgraded the projected job figures for 2014.

Accurate job figures are important because the projected revenue from such data is used in balancing budgets. The new figures confirm what others have long suspected: that Connecticut is still mired in a business slowdown, years after the overwhelming majority of states have recovered jobs lost during “The Great Recession.”
Read more »
at March 14, 2016 No comments: Links to this post

Is the long, amicable honeymoon between Governor Dannel Malloy and Democratic leaders in the General Assembly over? One report points to trouble in Eden.

Following a Democratic majority caucus, Speaker of the House Brendan Sharkey confided to reporters that his people pointed a crooked finger of blame at Mr. Malloy for raises that the University of Connecticut gave to non-teaching staff. The raises were rescinded following a budget address given to the General Assembly in which Mr. Malloy noticed, apparently for the first time, that a “new reality” would henceforth require the General Assembly to pare back spending. Like the near approach of execution in the morning, the prospect of elections clears the mind wonderfully.
Read more »
at March 07, 2016 No comments: Links to this post

The Blame Game In Connecticut

“Cuz that’s where the money is.” Such was the response when Willy Sutton, the scrupulously honest bank robber of the 1920-30’s, was asked why he robbed banks.

Before the reader draws the usual aphorism from his holster – “honesty is the best policy” – he should be advised that Willie denied having said the quip for which he is most famous. He robbed banks, Mr. Sutton said, because it was exhilarating: “I was more alive when I was inside a bank, robbing it, than at any other time in my life!”

It turns out that the most famous line in bank robbing history was inserted into an after-interview story by a reporter who thought the quip would be good copy. He was right. Reporters In those days took such liberties – not like today. It is true, however, that Willie gave his name to a law, Sutton’s Law, which holds that in diagnosing crime, one should always consider the obvious.
Read more »
at March 04, 2016 No comments: Links to this post