Democrats and Republicans Behind Closed Doors

The relationship between Republicans on the one hand and Governor Dannel Malloy and Democratic leaders in the General Assembly, Speaker of the House Brendan Sharkey and President Pro Tem of the Senate Martin Looney, on the other has been frosty from the beginning of Mr. Malloy’s tenure in office. “Frosty” may be a considerable understatement: On budgetary matters, Democrats and Republicans were not on speaking terms at all.

Mr. Malloy, quite consciously, pushed Republican leaders out of the room during all his budget negotiations, which made budget formation easier for the Governor, even as it signaled a certain audacious and dismissive attitude towards Republicans. In fact, Mr. Malloy had diagnosed Connecticut’s ills before he presented his first budget to the General Assembly. He knew what he had to do and proceeded to plow an unobstructed path for himself.
Read more »
at October 27, 2015 No comments: Links to this post

Governor Dannel Malloy’s economic policy does not work. But he is in good company. The nonprofit health-insurance companies set up to help people enroll in Obamacare are now failing.

Mr. Malloy’s progressive economic policy may be summed up this way: State government serves as a transformer, collecting money from the real economy and disbursing it according to need, from those who have to those who have not. Karl Marx laid down the law of a socialist economy more than a hundred and fifty years ago: “From each according to his abilities, to each according to his needs.” In enlightened countries, the job is done without destroying either capital or capitalists. “The last capitalist we hang shall be the one who sold us the rope,” Marx said. Progressive ambitions in the United States have been more modest. They proceed from Matthew (19:20-24) rather than Marx, and their adherents in the United States so far have been content to await a final felicity at the final judgment:
Read more »
at October 26, 2015 No comments: Links to this post 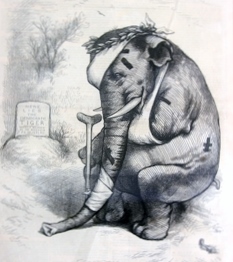 "… these people keep saying there's got to be other ways to do it. I'm calling their bluff" – Governor Dannel Malloy, announcing his plan for a pre-special session, closed door meeting.

“These people” are, of course, minority Republicans in the General Assembly who have been consistently shooed out of room by Mr. Malloy during budget negotiations. The above quote suggests that Mr. Malloy, beset by continuing deficits, is now prepared to negotiate in good faith with side-bar Republicans. Mr. Malloy clearly is signaling that the “greater good” should take precedence over the lesser good sometimes supported by majority Democrats whose political livelihood depends upon securing the active intervention of special interests.
Read more »
at October 20, 2015 No comments: Links to this post

The single event that precipitated this run of bad news for Governor Dannel Malloy, the most progressive chief executive in Connecticut since Wilber Cross, was the most recent Quinnipiac University poll.  First elected in 1930, when the progressive era in American politics was in full swing – Yes, Virginia, progressivism is even older than that, though the Cross administration is but a few years older than Bernie Sanders, progressivism’s great white hope for president  -- Mr. Cross abolished child labor and instituted the state’s minimum wage rate. Grateful for superman governors during The Great Depression, Connecticut later would show its appreciation of Mr. Cross by naming a highway after him.
Read more »
at October 15, 2015 No comments: Links to this post

Your Domain, Their Domain

It may be possible to trace the evolution of Eminent Domain from a U. S. Supreme Court Kelo vs. New London decision to its broader use by the Malloy administration.

In Kelo vs. New London, the high court decided it was proper under the “just compensation” clause of the Fifth Amendment to the U.S. Constitution for a state to use eminent domain to transfer property from one private owner to another private owner in order to further economic development. The “just compensation” clause of the Fifth Amendment provides that no person may be “deprived of life, liberty, or property, without due process of law; nor shall private property be taken for public use, without just compensation." In a 5–4 decision, the Court held that the general benefits a community enjoyed from economic growth qualified private redevelopment plans as a permissible "public use" under the “takings clause” of the Fifth Amendment.
Read more »
at October 12, 2015 No comments: Links to this post

A recent Yankee Institute study – “Unequal Pay: Public Vs. Private Sector Compensation in Connecticut” – provides a data foundation that supports what everyone writing about budgets in the State of Connecticut has known for many years.

The study shows that while the average non-tax supported worker in Connecticut earns a slightly higher salary than his state employee counterpart, benefits received by state employees far outpace those in the private sector by a ratio of about two to one. According to the study, total compensation for state employees, which includes salary and benefits, exceeds similar compensation for non-government workers in the state by at least 25 percent.
Read more »
at October 10, 2015 No comments: Links to this post

If a suit filed by the Democratic State Central Committee in Hartford Superior Court in answer to previous suit filed by the State Elections Enforcement Commission (SEEC) is upheld, Connecticut’s clean election law will have been judicially repealed. Under such circumstance, the Friends of Clean Elections in the General Assembly – assuming anyone holding elective office is a friend of clean elections in Connecticut – will have no choice but to repeal the law or, as seems more likely, gut and fillet it.
Read more »
at October 05, 2015 No comments: Links to this post

Crony Capitalism, One Party Rule, Not A Solution To State Debt

The juxtapositions are jarring.

According to one story, Governor Dannel Malloy has spent “$1 Million To Lure 16 Jobs to Stamford.” Mr. Malloy is lending MC Credit Partners $1 million at a two percent interest rate, and the company will be able to convert half of the loan into a gift “if it adds 10 people by 2018 and maintains 26 employees through 2020. If it only adds five workers, $250,000 of the loan will be forgiven.”

Connecticut -- for all practical purposes, a one-party state -- has now become a gambling den for crony capitalists. The sixteen jobs for which Mr. Malloy paid nearly a million were filched from New York City, whose crony capitalist governor, Mario Cuomo, would happily pay an equivalent amount on jobs he may in the future manage to filch from Connecticut. Mr. Cuomo recently put in a bid for General Electric (GE) jobs after the company’s CEO, Jeff Immelt, expressed profound dissatisfaction with Connecticut’s chronically out of balance and business-hostile budget. The budget included a new unitary tax that, applied against GE, might result in taxes paid to Connecticut on GE’s out-of-state entities. We all know it takes two to crony: a crony politician offering special exemptions, and a capitalist willing to oblige. In certain quarters, Mr. Immelt is the Vladimir Putin of crony capitalists, an aggressive bargainer with nuclear tipped teeth.
Read more »
at October 03, 2015 No comments: Links to this post