Documents, e-mails and the like that usually provide a backdrop to political campaigns generally are not made public, unless they are subpoenaed by an aggrieved party. Following a complaint made by Republican Party Chairman Jerry Labriola, Connecticut’s State Elections Enforcement Commission (SEEC) has subpoenaed documents and communications involving Gov. Dannel P. Malloy and several of his top aides, according to story broken by George Coli of NBC Connecticut News Live.

Mr. Labriola charged in his March 2014 complaint that Democrats illegally circumvented the state's ban on contractor contributions during the last gubernatorial campaign by laundering money through a federal account used to pay for mass mailings benefiting Mr. Malloy.
Read more »
at May 30, 2015 No comments: Links to this post

Mike Lawlor, Governor Dannel Malloy’s law and order chieftain, has a Chris Christie in his craw.

The Governor of New Jersey, a convenient campaign foil for Eastern Seaboard progressives such as Mr. Malloy, was recently cited in a news report, as a Republican not infested with racism who seemed to support a measure used by Connecticut progressives, Mr. Malloy among them, to tar Connecticut Republicans with racism – not by intent but by outcome. In the Malloy Eden, it is possible for an innocent Republican who opposes a Malloy measure to slither into a racist mode. To be sure, Connecticut Republicans, a moderate lot for the most part, intend no racism. But by questioning the hoped for outcome of Mr. Malloy’s “Second Chance Society,” they have shown themselves to be "racist in outcome."
Read more »
at May 26, 2015 2 comments: Links to this post

The Clinton Goo, The Smoking E-Mails and Assorted Blumenthals 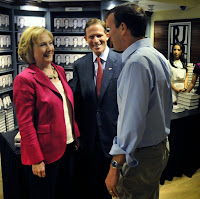 Only a few days after ABC News celebrity George Stephanopoulos got himself stuck in the ubiquitous Clinton goo, apparently an occupational hazard for friends of Bill and Hillary, Sidney Blumenthal – not to be confused with U.S. Senator Dick Blumenthal, also a dear friend of the Clintons – found himself stretched on the journalistic rack.

Mr. Blumenthal was first outed by a hacker known as “Guccifer,” who posted on-line four memos Mr. Blumenthal had written to Mrs. Clinton, the probable Democratic nominee for president. The e-mails were hacked from Mrs. Clintons’s private, unauthorized server. “Guccifer” apparently has done what all the Republican horses and all the Republican men thus far have been incapable of doing – prying from Mrs. Clinton’s clenched fist some e-mails touching on Benghazi she thought to keep private by operating from a private, and possibly illegal, server.
Read more »
at May 25, 2015 1 comment: Links to this post

Malloy, A Plagiarist In Effect 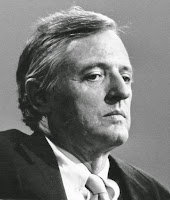 Connecticut commentators were shocked – SHOCKED! – to find that Grover Norquist, founder and president of Americans for Tax Reform, an organization that opposes all tax increases, and Governor Dannel Malloy, a progressive, though less progressive than Socialist Senator Bernie Sanders of Vermont or progressive love-child Elizabeth Warren of Massachusetts, should both agree that minor drug use should not be criminalized.

Mr. Norquist objects to mandatory sentencing for minor drug use because he rightly believes that sentencing should be a judicial rather than a legislative function.

Bill Buckley, considered by some to have midwifed the modern conservative movement, thought the same and proposed that drug use should be decriminalized.
Read more »
at May 22, 2015 1 comment: Links to this post 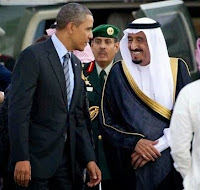 Shaken editorial writers proclaimed, “… Mr. Obama has an urgent alarm to sound. He's made climate change a top priority for the remainder of his second term. He's had trouble, however, bringing the Republican-led Congress onboard, so he's resorted to a series of executive orders. ‘Going forward,’ he said Wednesday, ‘I've committed to doubling the pace at which we cut carbon pollution’ on many fronts — more efficient buildings and power plants, renewables, energy research.
Read more »
at May 21, 2015 No comments: Links to this post 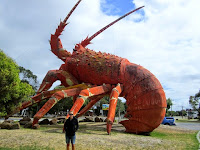 When the coroner bends over the body and pronounces Connecticut officially dead, some people, among them the enlightened members of the state’s dwindling editorial boards, will want to know the details: What finally did the patient in, and could the mortally ill patient have been saved had our political prescriptions been different?

The coroner’s likely verdict will be that Connecticut died as lobsters do when they are put in a pot of cool, salted water, the heat being gradually raised to the boiling point. At the beginning of the process, the lobster thinks it has finally arrived home in Homer’s welcoming, wine-dark sea; but, as the water grows hotter, its plight gradually begins to dawn upon it. It’s cooked; there is no exit.
Read more »
at May 20, 2015 3 comments: Links to this post

Looney to Connecticut’s Middle Class: Your Money Or Your Life 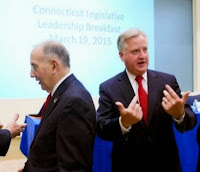 Politicians, like most people, tend to repeat successful behaviors long after they have ceased to be successful. In the political arena, one must carefully define “success.”

Shortly after Governor Dannel Malloy announced to reporters that Republican Party opposition to his “Second Chance Society” program was inherently racist – not in intent but in outcome -- the Republican leadership in the General Assembly bit back.

Mr.  Malloy’s formulation allows the accuser to sidestep the imputation that he is a liar, or worse: We all know you are not a racist. Your intentions are good, even praiseworthy – but the outcome of your intentions is racist. By this means, one may forgive the Devil himself.
Read more »
at May 16, 2015 5 comments: Links to this post

We all know that criminal laws have a disparate impact on cities. The famous bank robber Willie Sutton, once asked why he robbed banks, replied with disarming honesty “because that’s where the money is.” Likewise, asked why drug prosecutions are more prevalent in Hartford than they are in, say, tony Greenwich, an honest prosecutor, if there is such an animal, might reply “because that’s where the drug dealers are." The answer to the question why are there more drug runners in Hartford than Greenwich is a little more complex.
Read more »
at May 14, 2015 3 comments: Links to this post

Budget And Business Stability Take A Hike In Connecticut

Very quietly and without any fanfare, Governor Dannel Malloy on May 11 began negotiations on the state budget with Democratic legislative leaders Senate President Pro Tem Martin Looney and House Speaker Brendan Sharkey. The two leaders days earlier had given their approval to a finance committee approved budget that raised taxes considerably and was light on spending cuts. A budget produced by Republicans was its opposite number. Perhaps taking Mr. Malloy at his word, the Republican budget was balanced and contained no new taxes – just the sort of budget Mr. Malloy might have approved, if he took seriously his own campaign pledges. Several times during the gubernatorial campaign season, Mr. Malloy embraced a no new taxes budget plan. The budget Mr. Malloy presented to the General Assembly was out of balance and, said its critics, rather severe on groups of people who are forced by circumstances to throw themselves on the mercy of strangers.
Read more »
at May 13, 2015 1 comment: Links to this post 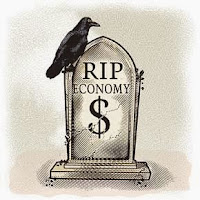 Chief Executive Magazine, a publication read by national and international Chief Executive Officers (CEOs) of major and minor firms, has just released its list of best and worst places to do business in the United States.

Connecticut ranks four spots from last on the list. Three comments from CEOs were far from reassuring:

“A difficult tax structure like the ones in New York or Connecticut makes incentive-giving easy, but penalizes existing businesses,” said one. “The climate for coming is better than the climate for staying.”
Read more »
at May 09, 2015 No comments: Links to this post

A Sense Of Hosley

William Hosley’s political preferences cannot be deduced from his multitudinous work-a-day affairs. That is because the past is larger than politics. The state really should get on its knees and thank God for Mr. Hosley, who is to Connecticut what Ansel Adams and Teddy Roosevelt were to national preservation sites. Mr. Hosley is the founder and creator of "Creating Sense of Place For Connecticut," a Facebook community of like-minded preservationists, historians and history buffs.

Preservationists must sometimes tire of being asked and re-asked the question, “Why should anything be preserved?” What has the past to do with me? Am I not a child of the future, a child of incessant change?
Read more »
at May 08, 2015 2 comments: Links to this post

The Hartford Courant reports that Elizabeth Warren, “the senior senator from Massachusetts known for her progressive views, will headline the Jefferson Jackson Bailey dinner on June 29 in Hartford.”

Email ThisBlogThis!Share to TwitterShare to FacebookShare to Pinterest
Labels: Warren

Do I Dare Disturb The Universe: Cutting Yelmini

“Do I Dare disturb the universe?” – T.S. Elliot, The Love Song of J. Alfred Prufrock

Increasingly, the legacy media chooses not to disturb the universe. Disturbances always are politically inadvisable and inconvenient.

In Connecticut, as everyone knows, the political universe is controlled by Democrats confabing in formerly smoke-filled back rooms, where the light of publicity rarely shines. It is the age-old mission of the media to comfort the afflicted and afflict the comfortable, and Democrats in Connecticut rarely have been as comfortable as in the past few years, following the capture of the governor’s office in 2011 by Dannel Malloy, the first Democratic governor since the administration of Governor William O’Neill, who left office in 1991 as deficit clouds were marshalling on the horizon.
Read more »
at May 04, 2015 1 comment: Links to this post 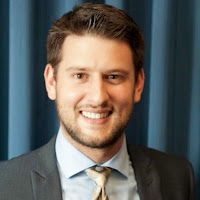 Printed with permission of the author: Philip Purciello. Presently, Mr Purciello heads up press relations for the Simsbury Republican Town Committee (RTC) and he is an RTC executive committee member.
On February 26, 2015 the Federal Communications Commission (FCC) – in accordance with Title II of the Communications Act and Section 706 of the Telecommunications Act of 1996 – adopted sweeping net neutrality regulation that converts internet infrastructure from a privately held commodity into a government regulated public utility (“Open Internet”, n.d.). In 2002, the FCC ruled that broadband internet should be classified under Title I; which regulated information services (Miranda, 2013). As a precursor to net neutrality, the FCC reclassified broadband for protection under Title II. Title II allows the government to regulate common carrier services – or telecommunications services that are used broadly by the public, like radio and television (Miranda, 2013). 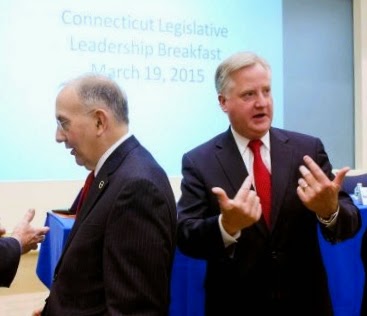 The General Assembly, as we all know, is ultimately responsible for budgets: The executive branch proposes, the legislative branch disposes, as the saying has it.

A few weeks ago, Governor Dannel Malloy, valiantly attempting to make good his often repeated campaign pledge that deficits during his second term would not be discharged through tax increases, sent to Connecticut’s General Assembly a budget plan he said was in balance. It was not in balance, and the draconian spending cuts Mr. Malloy offered were roundly rejected by leaders in his own party. The tax writing committee now has disposed of the Malloy budget.
Read more »
at May 01, 2015 1 comment: Links to this post