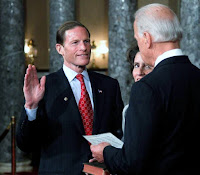 It’s difficult to know where to begin with the story “Blumenthal optimistic about GOP support in Senate for impeachment.” Perhaps one should begin by noting that no Republican in the U.S. Senate is Speaker of the U.S. House Nancy Pelosi or U.S. Senator Dick Blumenthal. Reversing a sustained determination to leave impeachment on the shelf, Pelosi last week announced that the House, now in Democrat hands, has begun an “impeachment inquiry.”

There are crucial differences between an impeachment inquiry and impeachment. Impeachment involves 1) the passing of a bill of impeachment in the House, and 2) garnering enough votes in a Senate trial to convict and remove from office the offender, in this case President Trump. Removal from office is the only sanction that applies to impeachment. Honest number runners would rate #2 at zero.
Read more »
at September 29, 2019 No comments: Links to this post

Trump And Impeachment In Connecticut

Realistically, what is the possibility that President Donald Trump will be impeached and removed from office before the next election?

Impeachment is a two-step process. First there is an impeachment proceeding in the U.S. House of Representatives, now controlled by Democrats; then there is a trial in the U.S. Senate, presently controlled by Republicans. If the bill of impeachment is accepted by the House and the trial in the Senate is successful, the offender – in this case President Donald Trump – is removed from office, the only punishment allowed in an impeachment proceeding. Since the Senate is controlled by Republicans, the possibility that Trump will be removed from office before the next election is remote, so improbable that it ought not to be taken seriously. Pelosi’s “impeachment investigation,” announced before a transcript of a telephone conversation between Trump and newly elected President of Ukraine Volodymyr Zelensky had been released to the public, is an effort to resurrect a corpse buried by Robert Mueller – collusion between Trump and foreign potentates.
Read more »
at September 27, 2019 No comments: Links to this post 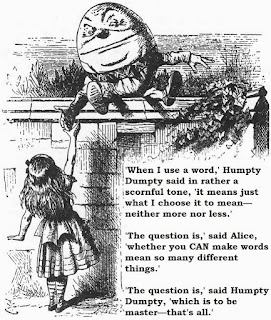 Kevin Rennie wondered in his blog “Daily Ructions” why, under “the grocery tax set to take effect Oct. 1, six bagels won't be subject to the higher sales tax, but five bagels will, because they're considered to be prepared foods for immediate consumption.” And he then proposed a solution to the conundrum: “The legislature needs to change this law.”

Governor Ned Lamont, Rennie wrote, is attempting “to erase the advantage grocery stores that sell prepared foods have over restaurants,” an alibi that seemed to him suspect. If Lamont were at all worried about the restaurant business in Connecticut, “he would not have singled it out for an increase in the sales tax from 6.35 percent to 7.35 percent. He wanted the money more than he cared about the cost of dining out and its consequences for restaurant owners, workers and patrons.”

And, truly, if Lamont and his handlers were worried about equity alone, the governor and the tax hungry crowd of Democrat progressives in the General Assembly could as easily adjust the disturbing inequity by eliminating both the restaurant and the grocery tax, leaving Rennie to buy his bagels at the grocery store without being harassed by Connecticut’s frothing tax man.
Read more »
at September 22, 2019 No comments: Links to this post


"I just started grief counseling. I'm always sad. I'm sad and in pain and I miss her." Wendy Hartling

Hartling is the mother of Casey Chadwick, murdered in 2015 by Jean Jacques, an illegal Haitian immigrant. Jacques was convicted of the murder of Chadwick in a New London Superior Court jury trial and sentenced by Judge Barbara Bailey Jongbloed to a 60 year term in prison. Since Jacques is 44 years of age, the sentence was, in effect, a life sentence. Connecticut Commentary coverage of the Chadwick murder may be found here, and here and here. Jacques could not have been sentenced to death because Connecticut’s Democrat dominated General Assembly, under pressure from the state Supreme Court, had abolished Connecticut’s death penalty law in 2012.

The slaughter of Chadwick was particularly brutal. Her body had been found by a friend who, opening a door to a closet, discovered Chadwick stuffed in a dark corner drenched in blood. At Jacques’ trial, a medical examiner would later tell the jury how she died. Jacques had slashed and stabbed Ms. Chadwick 15 times. A severed jugular vein and carotid artery caused her to lose 40 percent of her blood within seconds of the attack.
Read more »
at September 17, 2019 No comments: Links to this post

Ben Johnson once said that the prospect of execution in the morning “concentrates the mind wonderfully.” So did communism in Albania, and elsewhere among captive nations, during Peter Lumaj’s formative years.

My Father’s Prayers is subtitled A Refugee’s Continuing Search for Freedom. Peter Lumaj is precisely the storm tossed refugee that the Statue of Liberty in upper New York bay welcomes with her lifted torch: “Give me your tired, your poor/ Your huddled masses yearning to breathe free,” Lady Liberty boasts, “I lift my lamp beside the golden door!”
Read more »
at September 10, 2019 No comments: Links to this post

Fix The Hole In The Tax Bucket 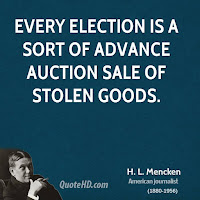 I can’t imagine how you can think philosophy and wine are similar—except in this one respect, that philosophers sell their learning as shopkeepers their wares; and most of them dilute it, too, and defraud customers — Lucian, “The Sale Of Philosophers”

“First, it was diversion. Now it’s ‘interception,’” Jahncke writes in the Connecticut Post. His article should have been titled “What a wicked web we weave when first we practice to deceive.”
Read more »
at September 09, 2019 No comments: Links to this post

I’d like to thank Dennis Swanton for inviting me here.  I want to touch on two areas of interest tonight, national and state government --they impinge on each other -- and end with a prayer to God to save us from ourselves. Otto von Bismarck used to say “God has a special providence for fools, drunkards, and the United States of America.” Let us hope it’s true. We’ll need a little divine intervention if Connecticut is to survive as a prosperous and welcoming state.  If you feel inclined to chuckle along the way, don’t restrain yourselves. Laughter is therapeutic. I’m hoping we might be able to bat around some questions in the Q&A that will follow.
Read more »
at September 08, 2019 No comments: Links to this post 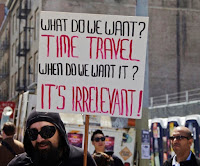 Even though no member of “the squad” – Democrat congressional representatives Ilhan Omar of Minnesota, Alexandria Ocasio-Cortez of New York, Rashida Tlaib of Michigan and Ayanna Pressley of Massachusetts – is participating in the national Democrat primary debate now underway, the drift of Democrat politics post primary has been set by them and, of course, Vermont socialist Bernie Sanders. Primaries bring out political extremists who, along with a 24-7 media, set the party narrative.

Before primaries became common in both parties, candidate selection was made by party bosses in smoke-filled back rooms, and eccentrics in the parties were allowed their fifteen minutes of fame during national conventions. Party bosses disappeared long ago; more likely, they have gone underground. And national conventions are now regarded as prime-time political shows, essential for generating campaign funding and spreading political gospels through sympathetic media outlets. Over the years, party conventions have lost their sharks’ teeth.
Read more »
at September 03, 2019 No comments: Links to this post