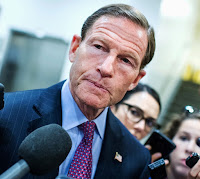 Steve Hilton, a Fox News commentator who over the weekend had connected some Burisma corruption dots, had this to say about Connecticut U.S. Senator Dick Blumenthal’s association with the tangled knot of corruption in Ukraine: “We cross-referenced the Senate co-sponsors of Ed Markey's Ukraine gas bill with the list of Democrats whom Burisma lobbyist, David Leiter, routinely gave money to and found another one -- one of the most sanctimonious of them all, actually -- Sen. Richard Blumenthal."


Hilton first rolls out the cast of characters. Devon Archer, “the longtime business partner of Joe Biden's son, Hunter,” joined the board of Directors of Burisma, a natural gas producer in Ukraine, sometime in April 2014. Soon after, Archer “had a private meeting with Vice President Biden at the White House late into the night, according to White House records.” Two day later, Hunter Biden, Vice President Joe Biden’s son, also joined the Burisma Board, and three day later “Vice President Biden went to Ukraine with promises of U.S. taxpayer cash for the Ukrainian gas industry.” Money, some believe undeserved, soon started flowing Hunter Biden’s way. Burisma recompensed Hunter somewhere in the neighborhood of $50,000 a month for his questionable “services.”

Hilton notes that “bank records taken from an unrelated FBI raid of Devon Archer's office in 2016 showed that Biden and Archer's firm, Rosemont Seneca, received monthly payments from Burisma with sums of over $150,000, sometimes even as high as $220,000, according to Fox News contributor John Solomon.”

Hilton speculates that Hunter Biden may have been more than a placeholder. Burisma’s founder, “a shady character called Mykola Zlochevsk, used his time as Ukraine's environment minister to hand out gas licenses from which Burisma would end up profiting.” Amazingly, though charges of corruption and embezzlement had been swirling around Zlochevsk for years, he had managed to escape prosecution. Is it possible, Hilton asks, that Ukrainian prosecutors feared to touch Zlochevsk because Hunter, the son of the Vice President of the United States, was on the board of Burisma? Hunter’s presence in the lap of corruption, Hilton reasoned, may have signaled Ukrainian prosecutors that “Zlochevsk had the backing of the American Vice President who was acting like some kind of Imperial consul in Ukraine. His word was basically law.”

Possibilities of this kind ought to be fully explored by competent authorities here in the United States. That may be why U.S. Attorney General Bob Barr and his special investigator, U.S. Attorney from the District of Connecticut John Durham are fetching around in the political muck in Ukraine and elsewhere.

And there is plenty of muck for journalistic muckrakers to explore as well. Muck of one kind or another has always sold newspapers. Today’s Hartford Courant features a long piece on the editorial page written by Edward Marcus, a former Democrat State Central Committee Chairman and State Senate Majority Leader in Connecticut, calling upon the members of the state’s all Democrat U.S. Congressional Delegation to support the impeachment of Barr, among others in the Trump administration on charges of treason. Though President Donald Trump has yet to tweet that any such interference in an ongoing Justice Department probe must be regarded, even by a fake news media, as an unwarrantable obstruction of justice, it’s probably in his Tweet hopper.

Should Blumenthal recuse himself from any effort to charge Barr with – treason! Hilton makes a sound case for recusal.

Hunter Biden’s business partner, Devon Archer, was once a top fundraiser for John Kerry, Secretary of State during the muck-days of the Obama administration. Shortly after Archer and Hunter Biden had joined forces with the corrupt and corrupting Burisma, “the company,” Hilton tells us, “channeled $90,000 to a lobbying firm called ML Strategies, which was headed by none other than David Leiter, John Kerry's former chief of staff. Registered as Burisma's lobbyist in mid-2014, Leider “gave close to $60,000 to Democrats, including a select group of U.S. senators who would later be instrumental in pushing cash towards Ukraine's energy sector, directly in line with Burisma's interests.”

One of the principal beneficiaries of Leider’s largess was then Senator Ed Markey of Massachusetts, author of a letter to Obama beseeching the President to “leverage the full resources and expertise of the U.S. government to assist Ukraine in improving its energy efficiency, increasing its domestic production and reforming its energy markets." Vice President Biden was put in charge of the effort.

Markey, Hilton says, “was the Senate sponsor of the Green New Deal! He wants to shut down gas production in America. Yet he personally intervened with the Obama administration to send your tax dollars to boost Ukraine's gas production. And not just once.” Archer, Hunter Biden's crony, funneled Burisma money to Richard Blumenthal “three times in 2013. The next year, Blumenthal returned the favor by backing legislation that would directly benefit Burisma and Hunter Biden.”

Ed Marcus has yet to call for the impeachment of Blumenthal on grounds of treason, but partisan hack Blumenthal should recuse himself from any and all attempts to frustrate the Barr-Durham long awaited investigation into the so far failed attempt by Democrats to vacate the 2016 presidential election. It would be the moral and decent thing to do.

auxbarricades said…
Partisan Hack - Ancient Fraud - Senator Stolen Valor - The list of negative descriptive idioms grows the longer this professional politician lingers onstage. The only State Attorney General in Connecticut history to hire a staff photographer while in office it was said of him then that the most dangerous place in Connecticut was standing between him and a camera. His super-human ability to be present for every photo-op led some to wonder how he could be in two places in Connecticut at once and to suspect he wasn’t there at all but that he was merely a hologram. He was ranked as the “nation’s worst state attorney general” by the Competitive Enterprise Institute which characterized him as, “a tireless crusader for growing the power of his own office and spreading largesse to his cronies”.

Anonymous said…
Must be from connections Dickie made while serving in Vietnam?
6:34 PM

Pat said…
Do Democrats have morals or do they know what decency is?
The last sentence of this article asks for more than what these Democrats are capable of. It is my prayer the party removed evil from their agenda and do something good.for the people of America.
2:21 PM

Anonymous said…
I am so sick of them accusing President Trump of corruption when more and more keeps coming out about them.
Right now, I’m happy with President Trump’s performance, I could see him winning the next Election, cause he tells it like it is!!
1:39 PM

Unknown said…
Blumenthal has been and is even more so now, an embarrassment to the people of Connecticut. Like all Democrats he speaks with a forked tongue. Hopefully they all get voted out of office.
4:19 PM

Unknown said…
By the way, Don, Steve is not just a contributor on Fox, his show is a shining star on the Sunday night line up, right after Levin. "Steve Hilton and The Next Revolution"!
7:32 AM

Unknown said…
This is Joe Biden's ticking time bomb. It has been completely ignored through the primary process (no Dem would bring it up), and now into the pandemic era. But, it will not go away. Ol'Joe better have a good excuse, otherwise have has a lot of 'splainin' to do.
4:09 PM

Anonymous said…
May it be the October surprise!
10:07 AM

Anonymous said…
You are all sheep this dufes a crook like biden
2:27 PM

Anonymous said…
Wow, great article. I would guess there are know other comments because big tech finds a way to hide intelligent thought. I will share this information to others. Thanks.
11:34 AM

August 22, 2021
Blumenthal U.S. Senator Dick Blumenthal, usually seen in a white hat at garage door openings, has a problem, and it is the same problem that shortly will torment President Joe Biden – Afghanistan, or rather what may be left of Afghanistan after the victorious Taliban has finished toying with it. “I’ve been known,” the ubiquitous Blumenthal once said, “to make appearances at garage door openings .” Taliban leaders, after capturing Kabul and routing the Afghan government, still claim – implausibly -- they will respect the terms of a Taliban-US pledge fashioned by former President Donald Trump and implicitly reaffirmed by Biden when he made a decision to end American support involving intelligence and air power to the U.S. recognized Government of Afghanistan. The withdrawal of air power assistance and reliable on the ground intelligence was the trigger that has led to the catastrophic end result now apparent to all. The Trump-Taliban deal – Trump loves making deals – was designed t
Post a Comment
Read more