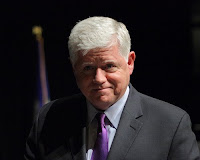 Anyone kindly disposed towards John Larson might have told him that if he lay down with dogs, he might get up with a few fleas.

They apparently didn’t, and he did.

The Journal Inquirer has reported in a flashy first page story, “Larson on the hot seat,” that the popular representative of the impregnable 1st District had struck up a very close friendship with earmark king Rep. John Murtha of Pennsylvania, now under scrutiny, for the second time, by the FBI.

Murtha and Larson were drawn together through their opposition to the war in Iraq, for all practical purposes now considered won by the good guys, although Murtha insisted as early as June, 2006 that the American presence in Iraq was more dangerous to world peace than nuclear threats from North Korea or Iran.

The FBI didn’t get their man on the first try, an ABSCAM sting operation launched in several years ago in which agents disguised as Arab sheiks attempted to entice legislators to accept bribes in return for political favors.

In a hilarious video still floating around on the internet, Murtha refused the bribe and suggested the sheiks might instead want to make a contribution to one of his distressed constituents. The video leaves the strong impression that in Murtha the fake sheiks had met a man who was willing to deal.

And congressman Murtha, a member of the House Appropriations Committee and Chairman of its Defense Subcommittee, has been dealing ever since.

An old time pol, Murtha is on good terms with earmarks, which allow powerful chairmen of various committees to assemble votes on favored measures from party stalwarts who have received allotments to keep them in the good graces of their constituents back home. In political parlance, this is called bringing home the bacon, the earmark being the bacon. The official definition of an earmark, as provided by the US Office of Management and Budget, is: “…funds provided by the Congress for projects or programs where the congressional direction (in bill or report language) circumvents Executive Branch merit-based or competitive allocation processes, or specifies the location or recipient, or otherwise curtails the ability of the Executive Branch to manage critical aspects of the funds allocation process.”

So long as earmarks are kept within the congressional family, they present little difficulty.

Citizens for Responsibility and Ethics in Washington has cited Murtha as one of the 20 most corrupt members in Congress. When Murtha steered defense appropriations to clients of KSA Consulting, which employed his brother Robert, and the PMA Group, founded by a former Murtha senior staffer on the Appropriations Committee Subcommittee on Defense, Paul Magliocchetti, Citizens for Responsibility and Ethics in Washington (CREW), listed Murtha under “Five Members to Watch” in its Second Annual Most Corrupt Members of Congress Report.

The FBI, now investigating campaign contributions make by Magliocchetti and others, was watching.

Larson now has been connected with these entangling alliances. Both his campaign committee and his leadership political action committee, a device that allows entrenched incumbents to purchase the allegiance of fellow legislators through campaign finance transfers, have collected $42,350 from both PMA Group’s corporate PAC and individuals linked to the firm, according to the JI report.

“Larson, a six term incumbent who serves on the powerful House Ways and Means Committee,” the paper reported, “obtained a $400,000 earmark for the Connecticut Center for Advanced Technology, which last year paid PMA $25,000 to represent it.”

And – where have we heard this before? -- the Connecticut Center for Advanced Technology, “which is sited in the East Hartford Campus of United Technologies Corps, “is headed by former Larson chief of staff Elliot Ginsberg, and got the money for a project called ‘Catalyst: Explorations in Aerospace and Innovation Education,” according to the JI report.

Larson, who has given to charity some of the questionable donations, has admitted he knew that his former aide was represented by the group headed by Murtha’s former aide. He defended his earmark, according to the JI report, “saying it shouldn’t be questioned ‘unless you think that getting science and mathematics instruction for underprivileged kids in Hartford in a program that the state Department of Education is fostering is a bad idea.’

“He added: ‘I thought it was pretty routine, that it was standard in terms of the kind of thing it was.’”

Well, among certain kinds of U. S. Representatives, such things are routine.

The FBI will determine whether they are also punishable.

Anonymous said…
crickets chirping. Will this see the light of day anywhere in the press/tv?
6:43 PM