Throw the Bums Out 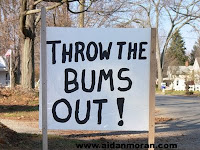 There were hints very early on, for those paying attention, that Democrats in Connecticut’s General Assembly preferred tax increases to spending cuts as a means of liquidating the state’s spiraling deficit. Perhaps the chief evidence is that in the past spendthrift Democrats have always preferred to fill deepening deficit pot holes with tax dollars.

New England is not exactly a safe haven for heavy breathing tax payers. We are no British Virgin Islands, where the weather is balmy and the tax climate is propitious for business. The BVI has only 21,000 people —but over 400,000 registered International Business Corporations, second only to Hong Kong in total number.

One of the reasons Connecticut has lost so much business to South Carolina, to pick at random just one Southern state where taxes are less punishing, is that plucked taxpayers flee fleecing states for pretty much the same reason that householders flee flaming houses: They don’t want their britches to catch on fire.

The budget architects in Connecticut’s Democrat controlled General Assembly very likely were watching New York before they presented their own plan. The budgets of states addicted to spending have sometimes served as a template for Connecticut’s legislature, also hooked on spending. Drowning in deficits, New York’s Democrat controlled legislature decided to eschew meaningful spending reductions in favor of dunning the state’s disappearing fleet of millionaires who, sadly, will not be moving any time soon to Connecticut.

Financial advisors to the rich are even now telling their clients to incorporate their businesses in Campione d’Italia, a dot of a town in Italy surrounded by Switzerland, which is to tax havens what America used to be to the struggling masses yearning to breath free of the kind of budgets regularly produced in New York -- and now Connecticut.

Connecticut’s tax increases will be retro-active, which means that the government intends to reach back before the new tax code was established to seize monies not available under the previous dispensation. If the courts regard tax money as property – and what else is it? – ex-post facto tax laws may be a constitutionally unwarrantable seizure of property.

Connecticut Democrats have proposed raising current top tax rates from 5 to 6 percent for quarter millionaire couples who earn jointly more than $250,000 annually; the rate will increase to 7 percent for half millionaires who earn more than $500,000 a year and 7.5 percent for incomes above $750,000, topping out at a 60 percent increase for those wishing to incorporate elsewhere or move to Campione d’Italia rather than New York or Connecticut.

This budget does not only represent a collapse of imagination. A budget is a state’s destiny because it reaches into and shapes the future. This one says to the wealthy, “Shut up and die.” It says to the middle class, “Kiss your children goodbye.” It says to your children, “Kiss your future goodbye.” When the state’s children graduate from one of Connecticut’s well provided colleges, they will leave the state behind in search of jobs that the state legislature has taxed out of existence.

As a prefiguration of the future, consider this: One of the many new taxes that spilled out of the brains of Democrats who ought to be voted out of office is a tax on tax preparation services.

That insult alone ought to serve as a convincing reason to throw these bums out .

This budget just shows the complete lack of economic understanding by the Democratic party in this state. They are so out of touch with reality it is not funny.