What’s Levy Got To Do With It? 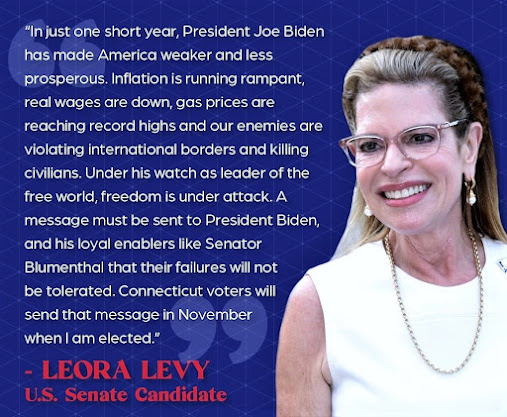 The issues driving her campaign for the U.S. Senate, Leora Levy reiterated at a recent campaign stop in Manchester, Connecticut, are the same “driving the issues nationally: inflation, the lack of protection for our borders, the lack of parental control over their children and over the curriculum in the schools and other woke policies.”

Though President Joe Biden will not be on the ballot in 2022, the president’s policies are inextricably connected with the campaign of incumbent U.S. Senator Dick Blumenthal, long a fixture in Connecticut politics. Blumenthal should not be permitted to hide behind the flower pots in the coming campaign.

Levy believes she is the Republican candidate for Congress best able to confront a weakened Blumenthal on important policy issues, the international resurgence of “power communism” in Vladimir Putin’s Russia and Xi Jinping’s China, and Blumenthal's effective resistance to comically absurd progressive idiocies at home.

What’s communism got to do with it?

The high tide of anti-communism in the United States and much of Western Europe occurred during the Stalinist period, roughly from 1922-1952. Stalin was known world-wide, admiringly in Russia, as “the breaker of nations.”

And he did break nations, among them Ukraine, which Stalin subdued by creating a famine that took 5 to 10 million lives. The death count from the Holodomor, 1932-1933, is imprecise because Stalin ordered that population counts should not be collected within the burgeoning Soviet Union during its period of oppression.

Some reporters and newspapers were delighted to cover for Stalin. Walter Duranty, the lead international reporter for the New York Times, was one of these. Duranty, who nodded approvingly in print when Stalin quipped “One death is a tragedy, a million deaths is a statistic,” and “you can’t make an omelet without cracking a few eggs,” received a Pulitzer Prize, still hanging on the paper’s wall of Pulitzers, for having brazenly lied about the famine.

Anti-communism in the United States first came to public notice after Winston Churchill in 1946 warned in a speech he had given at Westminster College in Fulton, Missouri, of an iron curtain descending on Europe. Churchill shared the stage with President Harry Truman, who heard his words clearly: “From Stettin in the Baltic to Trieste in the Adriatic, an iron curtain has descended across the Continent. Behind that line lie all the capitals of the ancient states of Central and Eastern Europe. Warsaw, Berlin, Prague, Vienna, Budapest, Belgrade, Bucharest and Sofia, all these famous cities and the populations around them lie in what I must call the Soviet sphere, and all are subject in one form or another, not only to Soviet influence but to a very high and, in many cases, increasing measure of control from Moscow.”

Anti-communism in the United States was  a victim of its success, its end signaled by the destruction of the Berlin Wall. Anti-communism died, in other words, of its own success, 43 years after Churchill’s “Sinews of Peace” speech.

In New Haven circa 2022, communist affiliations, however fleeting, may be – and are -- safely ignored, even as post-Stalin-Mao communism was succeeding beyond wildest expectations in China, whose elite governing class has now constructed, with the help of American industrial giants, a totalitarian governmental apparatus that is part communist, part fascist. Hong Kong was a British colony from 1842-1977, when the British protectorate tumbled prematurely into China’s clenched claw, and now, American intelligence officials are telling us, China has cast its predatory eye on Taiwan.

What’s New Haven Got To Do with it?

Putin, a Stalinist wannabe, has been reducing Ukrainian cities to rubble for more than four months. Having failed to intimidate Ukrainian President Volodymyr Zelenskyy, he has had better luck reducing American negotiators to a sort of tremulous jelly by intimating that he could easily destroy the whole of Ukraine, the whole of NATO, and, who knows, Washington DC, with nuclear weapons, if the freedom loving West does not instantly put a halt to the defensive weapons it plans to send to a besieged Ukraine. Any aid to Ukraine that interferes with Putin’s conquest will be mightily resented.

Even now, Ukraine has not received from the West the military hardware it needs to fend off Putin’s annexation of southern Ukraine.

But don’t expect the New Haven union-connected Communist Party to denounce either Putin or China.

Blumenthal is not alone among Democrat politicians in the state who have used the New Haven communist platform as a cross pollination service station that brings together progressive-socialist Democrats – all of whom manage to sound like Vermont socialist Bernie Sanders – and ardent hardcore communists such as Joelle Fishman.

What’s Levy Got To Do With it?

A Connecticut Republican running this year against incumbent Democrat U.S. Senator Dick Blumenthal, Levy is too easily dismissed, usually by postmodern progressives, as a conservative check and balance to Connecticut’s all Democrat, all progressive U.S. Congressional Delegation.

To be sure, Levy is a conservative. But in her inmost being, she legitimately can proclaim, along with Thomas Jefferson, “I have sworn upon the altar of God, eternal hostility against every form of tyranny over the mind of man."

Democrats in the United States this year are making strenuous efforts to hijack the whole notion of oppression.

But Levy – a Jew, a Latina whose family had been oppressed by Fidel Castro’s communist regime in Cuba, a woman who proudly notes she was among the first women to make her way successfully through the thorns and briars of a male dominated international commodity trading culture, an ardent conservative – knows in the marrow of her bones what real oppression is. Oppression is a denial by force of essential God given, natural liberties that allow the oppressed to escape the hobnailed boots of raw power.

Wherever in a state the poor are always the same poor, where poverty is passed along from generation to generation and the trapped poor are unable to escape the solicitous iron shackles of a liberty denying all-powerful state apparatus, where the same poor, more often than not, are prisoners of forceful administrative systems that prevent them from rising out of state sponsored poverty, there will you find oppression, disguised as governmental solicitude and charity.

Blumenthal’s campaign is inextricably connected with Biden’s polices. The issues driving Levy’s campaign in Connecticut are, she has said, “the same driving the issues nationally: inflation, the lack of protection for our borders, the lack of parental control over their children and over the curriculum in the schools and other woke policies.”