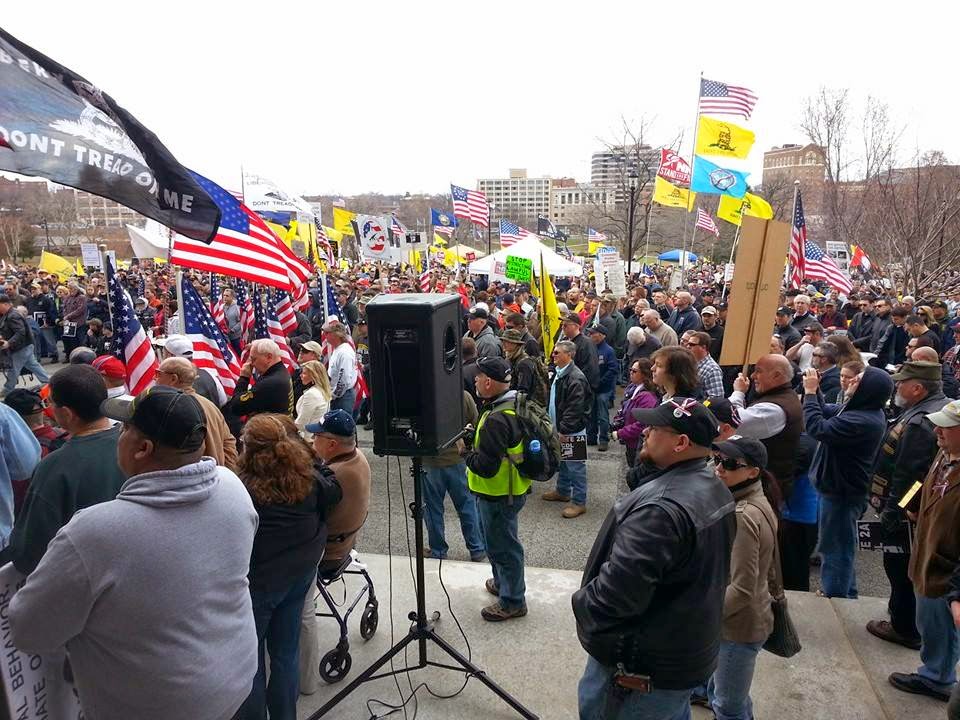 On April 5th, sixteen months after Connecticut’s predominantly Democratic General Assembly had passed into law the most restrictive gun legislation in the nation, opponents of the legislation rallied on the North side of the Capitol in Hartford.

The event was well attended: Capitol police estimated the crowd at 3,000; those hosting the event, the Connecticut Citizens Defense League (CCDL), placed the figure at 5,000. None of those present at the rally had been called upon by the General Assembly to offer testimony on the final bill, which itself was billed as an adequate and necessary response to a mass slaying at the Newtown Sandy Hook Elementary School. The final bill was passed without a public hearing by a legislature operating in the absence of information contained in a much too delayed criminal investigation.


Governor Dannel Malloy – once a prosecutor who, Mr. Malloy has often said, had tried criminal cases – declared at the time that the data contained in the criminal report was quite unnecessary; Mr. Malloy and the legislature knew enough about the events surrounding the massacre at Sandy Hook to write legislation that would in the future serve to prevent such occurrences everywhere in the state. The gun regulation bill would advance the public safety, the public was assured, public safety being the primary responsibility of both national and state governments.

That was not all the governor said. Early on, Mr. Malloy, the complete politician from head to toe, seemed to understand, almost intuitively, that gun regulation might be a useful prop in the coming political campaign. Indeed, Mr. Malloy’s campaign howitzer was pointed directly at the National Rifle Association (NRA), what he regards as unreasonable defenders of the U.S. Constitution’s 2nd Amendment, Tea Party zanies and -- a bit surprising for the head of a state that has produced few jobs since 1991 -- gun manufacturers in what had been called since the American Revolution “the provision state.” Not only gun manufacturers but large corporations such as Pratt&Whitney still provide the U.S. government with war material. Even now, Connecticut is, to turn a phrase coined by Mr. Malloy, “still revolutionary.”

And yet here was the governor of a still revolutionary state telling gun manufacturers that they cared only for profits. “What this is about,” Mr. Malloy said on one of his frequent national television appearances, “is the ability of the gun industry to sell as many guns to as many people as possible -- even if they are deranged, even if they are mentally ill, even if they have a criminal background. They don’t care. They want to sell guns” -- meaning the flinty hearts of gun manufacturers did not bleed for the innocent victims of a mass murder in Sandy Hook. These sub-humans were interested only in filthy lucre.

Compassion for the victims of the Sandy Hook massacre, the people of Connecticut were to understand, was a rare and tender emotion cherished only by politicians such as Mr. Malloy and U.S. Senators Dick Blumenthal and Chris Murphy, all of whom were determined to blunt the outsized influence of the NRA. To date, more than a year after the slayings, Connecticut Senators Blumenthal and Murphy have not been successful in persuading U.S. Senate Majority Leader Harry Reid to bring a gun restriction bill before the Democratic controlled Senate. We are given to understand that Mr. Reid is not uncompassionate; he simply lacks votes in the Democratic controlled chamber to pass a measure mirroring Connecticut’s highly restrictive gun law.

It is the insulting obduracy of Mr. Malloy and Mr. Murphy in particular  – Mr. Blumenthal has been slightly more cautious in his language – that has created what is now a permanent political opposition Connecticut. The trick in politics always is to slide your proposals, particularly pointless ones, past the noses of those deleteriously affected by them, not to bash them with inept demagoguery. Mr. Murphy and Mr. Malloy have made it impossible for their most virulent opponents to shrug off their persistent attacks as political posturing, the principal aim of which is to attract votes.

The CCDL rally in Harford, four months in the making, was by any measure a success. The large crowd -- rallying around the U.S. and State Constitutions, the flag and what they consider misguided legislation -- were animated and goal directed: Their goal, of course, was to flush anti-constitutional demons from the building they faced and to prevent further legislative encroachments on liberties hard won by the architects of the American Republic. The statues of the founders of Connecticut looked down upon them from the heights of the building. Quotes from Jefferson and Madison adorned their signs. There were scores of women and children in the crowd -- and out of state participants from New Jersey, New York, New Hampshire, Massachusetts, Mississippi, West Virginia, about a dozen states in total, according to CCDL organizers. Most of the speakers mentioned, in one way or another, the bountiful fruits of a politics of limits: Governments were not created to put men in chains, but rather to permit men and women to guard with their lives, their fortunes and their sacred honor the God given fruits of liberty heralded in the founding documents.

I am ambivalent about lending this sort of event to pols, but grateful to those pols who showed up.
Query as to why Foley can't show up at the "debate" this week. One suspects that he is playing the old game; he's ahead in name recognition, ahead in the polls, and he's risk averse, which is to say he thinks leadership doesn't win elections.

Of those candidates responding to the very good question posed by the Courant, i.e., what are the big things they'd focus on as Governor, Ms. Dean is pretty close to right on. Not saying I'll vote for her, but do very much appreciate her articulation of the main problem; government out of control.
-------
"...my focus would be on making sure state government does what it is supposed to do, only — and does it very well, and that it stops infringing upon citizens' fundamental rights...

Right about Foley. Dean already has been muscled by CT's left of center media, not that she minds it. Someone should propose the creation of an Inspector General's post. And someone should put Lawlor on the griddle. I think McKinney has proposed a IG post. Corruption, public safety, perhaps term limits, deregulation, spending cuts, one party hegemony (especially in cities), croney capitalism -- all could be fashioned into populist issues. But you need a populist to do it.

I think McKinney has proposed a IG post.
------------
And, unlike Boucher, for example,there's no talk from McKinney about "creating jobs" or emphasis on improving government education to qualify Nutmeggers for those jobs "created."
Let's cut spending, cut taxes, reduce regulation...
------------
Gov. Malloy recently said, "We will never be a low-tax state." I say, why not? I remember when Connecticut was a low tax state. If we are responsible with state spending, we can be again.