Humor And Its Discontents 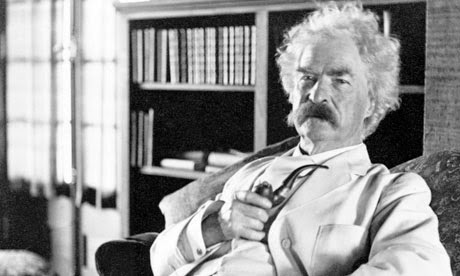 Former Ambassador to Ireland Tom Foley is not yet Abe Lincoln, who made ample use of humor on the political stump, nor is he Mark Twain, whose political barbs give 21st century progressives stomach cramps:  “No man's life, liberty, or property are safe while the legislature is in session.”

“All Congresses and Parliaments have a kindly feeling for idiots, and a compassion for them, on account of personal experience and heredity.” That quip by Mr. Twain would not have passed muster with the anti-idiot-discrimination crowd.

Even during his own day, no politician would have supposed that Mr. Twain’s humorous exaggerations were to be taken as scientific theorems. It is bad taste to take laugh lines seriously. Laughter is the proper response to a laugh line.
On the other hand, comedy conceals the dragon’s fangs because all exaggeration is an elaboration of a hidden but widely acknowledged truth, which is why the good laugh line stings. Congressmen do sometimes appear to be idiotic, and legislators in session do concern themselves with the acquisition of taxes – money is property – and personal liberty is abbreviated by excessive regulation.

One can only imagine what comic use Mr. Twain might have made of Bridgeport – or Hartford, where all the “idiots” meet to plot ways of wresting dollars from taxpayers.

Over in Fairfield – quite some distance from Bridgeport – GOP gubernatorial prospect Tom Foley told a Twainian stretcher to a receptive but slight Republican assembly:

“I’ve been working so hard actually, trying to find votes that I took my two-and-a-half-year-old twins down to Bridgeport last week and tried to register them to vote. I went up to the registrar’s desk and I was a little concerned. They’re not very big you know…She looked at them and said ‘boy, they’re pretty young. How old were they?’ I said two-and-a-half. She said ‘fine. So would you like to have four votes or eight votes?’ I said what’s the difference? She said ‘one hundred dollars….’”

Democratic Secretary of the State Denise Merrill was not amused, and the chief Democratic slasher in Connecticut, party chairwoman Nancy DiNardo, flashed her switchblade: “Not sure what’s more humorous, the fact that Tom Foley says he’ll appeal to voters in Connecticut cities when he’s against the state’s increase to the minimum wage, is actively courting the gun lobby, and even supported the Tea Party’s government shutdown… Or the fact that he repeatedly knocks Connecticut’s largest city in one breath, and then in the next says he’ll be the cities’ candidate.”

Fortunately for Ms. DiNardo and the Democrats, the unintended consequences of the state mandated minimum wage – which fall most heavily on poor African American boys – will not be felt until long after the upcoming elections are put to bed. No one expects the Democratic hegemony in the state’s larger cities to wither away any time soon. Connecticut’s cities have been Democratic fiefdoms for decades. In Connecticut’s one-party towns, the Hobbesian vision of life – nasty, brutal and short – is all too familiar, but not to people who live in Fairfield’s suburbs, where Mr. Foley safely cracked his joke.  Fewer jobs in the cities, more fatherless households, a state government that winks at murders committed with illegally acquired assault weapons; none of this is likely to render urban life less nasty, brutal and short.

In New Haven, Democrats recently elected as Mayor a candidate whose late husband had been the city’s most conspicuous tax scofflaw. Mayor Toni Harp, following her election, vowed to balance the city’s budget by raising taxes 3.8 percent. No one laughed. In Bridgeport, long under the thumb of Democratic power brokers, former state senator and felon Ernie Newton, appears poised once againto run for the General Assembly seat he was forced to relinquish before he went to prison.  Mr. Newton is a Big Tent Democrat.

"Our tent has to be big enough for everybody," Newton said recently. "Do you realize half the folks voting Democrat in Bridgeport could be ex-felons? So they're looking at a voice (for their needs)." No one laughed because Mr. Newton was not joking – and Mrs. DiNardo zipped her lips.

The difference between Mr. Foley’s remark and Mr. Newton’s is the difference between lightheartedness and lightheadedness. One was joking, the other was serious – and serious in a way that throws a searching light on the real danger of the one-party state, which is not so much incompetent as it is omni-incompetent. In a strong two party city, citizens may escape their discomfort through rational voting. In the one-party state or city, choices are made for them by lightheaded politicians, the sort of people against whom Mr. Twain directed his pen, which he claimed to have been dipped in the fires of Hell.

the real danger of the one-party state, which is not so much incompetent as it is omni-incompetent
----
Surely, there is plenty to laugh at in the political apparatus in Bridgeport or in Hartford. Yet, even though my sense is that these municipal governments are more ridiculous than ever, I don't find them as humorous. It's easier to laugh at the corruption in cities that the Democratic Party has not succeeded in utterly destroying; e.g., Chicago v. Detroit. Bridgeport and Hartford are simply pathetic.

The problem is not so much that there is only one political party in Bridgeport, its the particular political party. And, even the Democratic Party is capable of less corruption in less urban zones. The ultimate problem is that we, the Nutmeg Staters, have effectively engineered the middle class out of our cities. Those people who remain are omni-incompetent, and view themselves as perpetual beneficiaries of government care and largesse. Their primary concern is not with the duties of citizenship or of public office, and therefor corruption is not intolerably offensive.
--------
The Wit and Wisdom of Marion Berry

"The contagious people of Washington have stood firm against diversity during this long period of increment weather."

"I promise you a police car on every sidewalk."

"If you take out the killings, Washington actually has a very very low crime rate."

"I am clearly more popular than Reagan. I am in my third term. Where's Reagan? Gone after two! Defeated by George Bush and Michael Dukakis no less."

"The laws in this city are clearly racist. All laws are racist. The law of gravity is racist."
------
As World War II got underway, Curley saw an opportunity to expand the Irish mob's[citation needed] influence in the defense industry. After several campaigns involving bribery, Curley finally faced felony indictment. Nonetheless, Curley's popularity with the Irish American community in Boston remained so high, that even in the face of this indictment he was re-elected on the slogan "Curley Gets Things Done"...

During one of his campaigns Curley promised he would get all the Irish washer women off their knees. Following his election victory, he bought them all long handled mops.

The national government has put on a great blitz in the past five years, but it has not yet achieved comprehensive destruction. Like with Chicago or Manhattan, there's still an edifice we can point at and call the United States. So, while Baraq Obama and Eric Holder are doing their best at institutionalizing corruption of the Constitution and the rule of law, we can still find a lot of humor in the situation. We certainly wish that H.L.Mencken were around to provide commentary on the reigning mountebanks and buffoons.
------
Community organizing is a process where people who live in proximity to each other come together into an organization that acts in their shared self-interest. Unlike those who promote more-consensual community building, community organizers generally assume that social change necessarily involves conflict and social struggle in order to generate collective power for the powerless. A core goal of community organizing is to generate durable power for an organization representing the community...
-----------
On some great and glorious day the plain folks of the land will reach their heart's desire at last, and the White House will be adorned by a downright moron.
H. L. Mencken