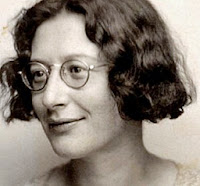 It’s shear happenstance that Andrée is reading a biography of Flannery O’Connor on “talking books” just as I had finished reading to her a short biography on Simone Weil. Following the Weil biography, I picked up a book called the Simone Weil Reader, a collection of her major writings.

Both writers were afflicted, O’Connor with lupus and Weil with an eating disorder. Camus says of Weil that she refused during the Second World War to take more nourishment than was available to troops in the war theatre and so starved herself. This was partly true; Weil had suffered for years from anorexia.

Weil on the captive mind: “At the very best, a mind enclosed in language is in prison… A man whose mind feels that it is captive would prefer to blind himself to the fact. But if he hates falsehood, he will not do so; and in that case, he will have to suffer a lot. He will beat his head against the wall until; he faints. He will come to again and look with terror at the wall, until one day he begins afresh to beat his head against it; and once again, he will faint. And so on endlessly and without hope. One day he will wake up on the other side of the wall.”

An accidental exile from France at its moment of greatest suffering, Weil petitioned Charles De Gaulle to have her airdropped into the country; he ignored her. She was an extremely influential writer. Camus says she was the greatest person among her contemporaries. Her writings on Christianity and affliction – which is not the same thing as suffering – are a necessary antidote to the person-centered century in which we live. We flee from affliction the way the devil flees from holy water; the way healthy people put death out of their minds. O’Connor suffered from lupus, a debilitating disease that ends, inevitably, in death – a form of universal affliction. Both were Catholics at a time, like our own, when Catholicism is thought to be either a romantic fantasy or an anti-scientific leprosy.

One instinctively and involuntarily shrinks from death and affliction – Catholicism too. And there is little doubt that the “practical atheists,” a term Jacques Maritain thought useful, consider the Catholic faith their chief enemy. The question is why?

Among modern Catholics, there is a certain distance from their Catholic consciousness and the best Catholic writers, many of them converts, of the past century. Is any modern Catholic more brazenly Catholic than G. K. Chesterton or John Henry Newman, both converts?

So, there are two questions: 1) Why do the secularists – really, the pro-materialists who despise all things sacred – hate Catholicism so, with an almost diabolic enmity? And 2) Why are Catholics mute in the face of such devilish odium? Why don’t they spit in the devil’s face?

Weil says that the worst thing one may say to another human being is – “You don’t matter to me?” This insult is a way of abolishing the sacred nature of the person so addressed. It is the gravest of sins, a sin against the Holy Spirit that will not be forgiven, because it is an absolute repudiation of “the good” in a human being. It is the thought ever-present in the executioner's mind. The ovens of Auschwitz are unthinkable in its absence.  And that is the way secularized Catholics and Catholic haters think about the Catholic Church, most especially when the thought sleeps quiescent like a serpent in their brains.

The Catholic Church wants to enlarge the boundaries of the sacred. In its innocence, it supposes that the sacred would be inviolate, that men and women could not both know the good and reject it. As I say, in its innocence…

Flannery O’Connor may not have read Soren Kierkegaard comprehensively, but she took him seriously. His whole effort was “by indirection, to find directions out.”

In this, she followed him, one might say, religiously. Her whole effort is to put spiritual directions, cleverly disguised, in her novels and short stories, confident that she will not be found out.

Her characters are large cartoons. In fact, her ambition was to be a cartoonist. Men and women of her day were so dead to things of the spirit that only exaggerated characters and gestures would be noticed by them. For artists in the 20th and 21st centuries, it’s important to get past the hubbub. This is why modern artists, most of whom have abandoned beauty, concentrate so fiercely on insult art, violence and pornography.  The easiest way to force a sleeping man to attend to your art is to slap him awake or excite him erotically.

At some point, repetitive insult kills the sensuous nature of the witness, who is starving for beauty; a sort of stubborn resistance sets in. The patient tires of the slaps; they no longer provoke. Madonna dies in the heart. But not to worry, she is replaced by Miley Cyrus, intent on murdering the Disney character she had become.  So long as the audience is open to reinvention, the farce goes on… and on… Eventually, the audience dies of a surfeit of sensuousness and insults. It moves forward – hopefully in search of beauty.

Anonymous said…
That was enjoyable to read, thanks for posting it.

Don Pesci said…
I appreciate that you read it. Better to read either author, especially Weil.
6:28 PM

Anonymous said…
Maybe I take O'Connor too seriously.
Her stories depress me, an east Texan.
A cartoonist? Not surprising then the inhabitants of her tales seem such caricatures.
Weil, on the other hand, is deadly serious. As she says, "truth is an explosive".
If her life has slapstick elements it is only because she dared to lay herself open to life, baring all.
She was no Clint Eastwood or Rambo and I dare say few of us are.
4:10 PM