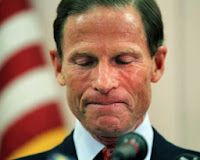 U.S. Senator Dick Blumenthal’s awkward false claim, made or intimated several times, that he had served as a marine in Vietnam rose out of the newspaper morgues recently after former New York Times political writer Ray Hernandez joined a Washington D.C. PR firm.

The story in the Hartford Courant, “NY Times Reporter Who Was Fed Blumenthal Vietnam Scoop Will Join DC Firm Led By One Time McMahon Adviser”, actually is a story about a story, a story twice removed.

The Courant story is brief enough to be included here in full:

Normally the comings and goings of journalists aren’t that interesting but in this case, as Byers noted, Hernandez’ move merits a mention. Back in 2010, Hernandez broke the story that now Sen. Richard Blumenthal falsely claimed he served in Vietnam.

The story was built upon a snippet of video from an obscure event in Norwalk several years earlier. Almost immediately, people began to speculate that video was unearthed by the crack opposition research team of Blumethal’s (sic) multimillionaire Republican opponent, Linda McMahon.

Columnist Kevin Rennie wrote the following on his blog right after the Times story broke: “The Blumenthal Bombshell comes at the end of more than 2 months of deep, persistent research by Republican Linda McMahon’s Senate campaign,” Rennie wrote. “It gave the explosive Norwalk video recording to The Times.”

Ed Patru, McMahon’s 2010 media strategist, fessed up to the Connecticut Mirror. ”We got our hands on it,” Patru told @CTMirrorPaz shortly after the story broke.

That last word – Coincidence? – hangs in the Courant story like a hangman’s noose. Of course it’s not a coincidence, you ninny. The McMahon campaign slips to a New York Times reporter “a snippit of video” showing Mr. Blumenthal lying about his service in Vietnam; the reporter constructs a story around “the snippit of video”; the story causes Mr. Blumenthal, then running for the U.S. Senate from his perch as Connecticut’s Attorney General, a bit of embarrassment, but he barricades himself from probing reporters, asserts he several times misspoke, and  survives “the snippet of video”; later the reporter, Mr. Hernandez,  is hired by a firm whose Vice President, Mr. Patru, was a campaign advisor to Linda McMahon, the millionaire. Coincidence? The imputation is that the hiring of Mr. Hernandez by Mr. Patru is a payback of some kind. In politics, as savvy reporters well know, there are no coincidences – unless the tangle of connections involves one of “our bums,” in which case we write a story that makes reference to a “snippit of video,” while failing to mention other snippits of video and news reports that show Mr. Blumenthal either saying or brashly intimating that he served as a marine in Vietnam.

Here is the “snippit of video” cited in the Courant story:

The story follows on the heels of multiple reports of a claim made by Tom Foley, a Republican Party gubernatorial wannabe, that Roy Occhigrosso, gyrating between his employment at Global Strategy and communications chief for Governor Dannel Malloy, may have crossed an ethical bar when the PR firm was awarded a Malloy connected contract. Mr. Foley had invited Connecticut’s media to look into a relationship he regarded as unsavory, if legal.

The Malloy-Global Strategy connection, it would appear from multiple editorials and commentary pieces in Connecticut, none of them favorable to Mr. Foley, may have been “a coincidence.” After all, political operatives constantly shuttle between newspapers, political organizations, educational institutions and high paying PR firms always happy to have in their employ politically connected fallen stars.

Such things happen all the time. Charlie Morse, the Courant’s chief political writer, left the paper, where he had for several years written glowing accounts of the sayings and doings of then Senator Lowell Weicker, to work on the Weicker campaign for governor; Michele Jacklin, who as chief political commentator at the Courant stepped into Mr. Morse’s empty shoes, left the paper to work on New Haven Mayor John DeStefano’s campaign.

Happens all the time. Nothing to see here. Please move on.

Perhaps the best report on Mr. Blumenthal’s serial misstatements concerning his service in Vietnam came from Australia. The Australian Broadcasting Company (ABC) featured Mr. Blumenthal as one of a few notable imposters in a documentary on stolen valor called “Heroes, Frauds and Imposters” (hit “play video” on the link provided here: ), a documentary that puts Mr. Blumenthal’s misrepresentations in their proper context as an attempt by a smarmy politician to seal valor for political purposes from real heroes. That documentary, no snippit, will not be shown, it is safe to predict, anywhere in the state when the pretend Vietnam marine – like Mrs. McMahon, a Greenwich millionaire -- once again runs for office.