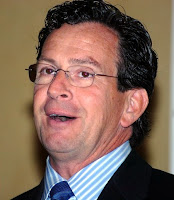 The budget submitted by Governor Dannel Malloy to the Democratic dominated General Assembly and approved by the legislature – although a pending deal between Mr. Malloy and state union workers requiring union givebacks of $1.6 billion had not been affirmed by the unions at its passage – is best seen as the inevitable political end piece of the first Weicker budget.


Mr. Weicker’s campaign for governor featured rather dramatic suggestions that he would not resort to an income tax to liquidate a large state debt. Similarly, Mr. Malloy several times during his campaign with Republican gubernatorial nominee Tom Foley suggested that an increase in taxes would be a last resort for him.

Instituting an income tax, Mr. Weicker said at the time, “would be like pouring gas on a fire.”

Upon being elected governor, Mr. Weicker chose as his Office of Policy Management chief Bill Cibes, a pro-income tax proponent who had run for governor on an income tax platform. Mr. Cibes had been soundly defeated. Before anyone could cry “Fire” in Connecticut’s crowded political theatre, Mr. Weicker, breaking arms and shoving pencils into the eyes of wavering anti-income tax legislators, set Connecticut ablaze with a new, relatively flat income tax. Mr. Malloy did not deign to allow Republicans to shape his budget, and his tax increase was larger than Weicker’s.

Spendthrifts in the General Assembly, most but not all of them Democrats, then and there pledged to make Mr. Weicker’s income tax more progressive. A progressive feature, finally added in the waning days of the Rell administration, has been improved by the Malloy administration. Governor Jodi Rell, the last Republican governor before the advent of Mr. Malloy, lampooned as “Snow White” by her Democratic opponents and the usual cheering section of Connecticut’s left of center media, was never a match for Machiavellian Democrats in the General Assembly. Looking backward from the vantage point of the Malloy administration, Mrs. Rell may be viewed as the last Republican cork in the bottle of a once fissiparous but now united Democratic Party. Mr. Malloy is the first Democratic governor elected in the Connecticut since former Governor William O’Neill departed the state more than 20 years ago, leaving in his wake a deficit of about $1 billion. In the post income tax era, the deficit has tripled, the budget has tripled, and the total liability straddling the state is about $68 billion. All of this is the result of the inability of the Democratic Party’s progressive wing to cut spending.

“We all want progress,” C.S. Lewis said. “but of you’re on the wrong road, progress means doing an about turn and walking back to the right road; in that case, the man who turns back soonest is the most progressive.”

Asked some time ago whether he feared the consequences of a one party state, Don Williams, the progressive state Senate President, retorted that such fears were overblown; the one party state gets things done.

It is not known whether Mr. Williams is a student of Italian fascism, but he clearly admires the oomph behind it as expressed in Mussolini’s definition of fascism: “Everything in the state; nothing outside the state; nothing above the state. And by “the state,” of course, the guy who made the trains run on time meant a one party governing power.

For all practical purposes, Connecticut is now a one party, progressive state – with a progressive income tax, a means of passing on the tax burden, rather than sharing it, to anyone who makes over $200,000 a year. Republicans this year exercised no influence in shaping Mr. Malloy’s union driven budget.

Following the passage of Connecticut’s budget, the New York Times, the editorial board of which is simpatico with Mr. Malloy, modestly pronounced Connecticut’s budget session “the most activist, liberal legislative session in memory.” As tokens of Mr. Malloy’s abundant liberalism, the Times mentioned that the governor worked with the General Assembly to “enact the largest tax increase in state history and approved the nation’s first law to mandate paid sick leave for some workers. The legislators voted to extend protections for transgender people, to charge in-state college tuition rates to illegal immigrants, to extend an early-release program for prisoners and to decriminalize possession of small amounts of marijuana.”

The paper clearly admires Mr. Malloy’s force and focus, even as it admired, without much attention to the direction of such force and focus, the same qualities in Mr. Weicker. It declares that if unions agree to the rather inconsequential, temporary sacrifices Mr. Malloy has asked of them in his budget plan, the governor will have “fixed the biggest budget deficit the state ever faced,” a doubtful proposition. Connecticut’s continuing budget deficits are the result of overspending, and spending has not been aggressively attacked in the Malloy budget, which freezes the wages of state union members for two years, thereafter increasing wages by three percent for the following four years. The Malloy budget contractually forestalls layoffs for four years and restricts “shared sacrifice” only to state union members. The shared sacrifice of taxpayers under the Malloy budget will be permanent; spending giveback from unions will be temporary. The state’s largest budget deficit in history has been “fixed” mostly by relying upon the state’s biggest tax increase in history, larger even than the increase that followed Mr. Weicker’s imposition of an income tax.

Republican gubernatorial candidate Tom Foley, who lost to Mr. Malloy, has not entirely disappeared. And, as might be expected, his assessment of Mr. Malloy’s “shared sacrifice,” differs markedly from the state’s left of center media. “The facts are clear and simple,” said Mr. Foley. “Spending in the general fund is budgeted to go up next fiscal year by over $450 million, an increase of 2.5 percent over this year. The governor's ‘deal’ with state workers' unions includes no reduction in either the number of state workers or the overall cost of the state workforce. Gov. Malloy and the Democratic majority are closing this entire budget deficit with increased taxes amounting to more than $2.5 billion.”

“He's rammed through audacious projects, including a nearly $900 million expansion of the University of Connecticut Health Center that could make the state a powerhouse in bioscience research and production.”

The operative word in that last sentence is “could.” Pouring nearly a billion dollars into such a doubtful proposition as the UConn Heath Center could, as easily, be throwing good money after bad, and the health center’s record in this respect suggests that the institution may not be salvageable at any price; its had been bailed out numerous times in the past, and throwing money in its direction has been an exercise in futility.

In a time of scarce tax resources – not even the audacious Mr. Malloy can press water from stones – Mr. Malloy has proposed a budget in which the problems he has temporarily settled by a shared sacrifice that weighs heavily on tax payers and lightly on tax consumers will almost certainly recur in a more virulent form later.

One of the most glaring, unaddressed political problems facing this and preceding governors is centered in the schedules that determine contract negotiations between Connecticut’s governors and bargaining units. Union contracts expire at different dates, which shifts the negotiation advantage from the governor’s office to union negotiators. Like the weather, all Connecticut governors have complained about it, but complaints do not change the weather.

Suppose, just to suppose, that an audacious governor and an enlightened General Assembly were to arrange matters so that all state contracts were to expire on the same date and hour. In that circumstance, contract negotiations between the executive department and unions could conclude in a more timely manner, which would give to the executive and legislative departments an advantage in negotiations they do not presently enjoy. The arrangement would more easily make shared sacrifice politically possible. Under the present arrangement – this year, the Malloy administration, working in concert with Democrats in the General assembly, pre-approved the budget without the certainty of union give backs -- both the governor and the General Assembly are held hostage to a process that gives union negotiators the upper hand in determining the final shape of the state’s budget.

The telling consequences of Mr. Malloy’s focused and forceful approach to government all lie in the future. And the preeminence of legislators and governors in a democracy over union negotiators may merit serious attention as Connecticut drifts effortlessly toward Mr. William’s utopian one party state.

Next session they will vote to have "May Day" as a state holiday.