A Revolutionary Frame of Mind 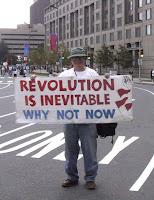 The time is coming when Governor Jodi Rell will no longer be able to address serious problems in Connecticut with the usual bromides.

Caretaker governors are those that take care of the permanent government.

Rowland swept into office on a wave of intense anger mixed with contempt for the previous governor, Lowell Weicker, father of the state’s income tax, an incubus that Connecticut’s sister state, Massachusetts, soon may attempt to shed in a ballot initiative vote. In his first campaign, Rowland promised to axe the tax but eventually succumbed, as many unprincipled (read: pragmatic) politicians do, to power brokers, mostly Democrats, with whom he quickly came to terms.

The mutually beneficial deal Rowland struck with the prevailing power structure was this: There would be no serious spending or tax cuts; the Democrats could continue to preen before powerful liberal interest groups, while assuring them they would be well fed from the public trough; Rowland would put up a brave show of resistance -- One newspaper during the usual bi-annual budget farce denominated him a “firewall” -- but on the final day of budget negotiations, none of the swelling surpluses would be returned to taxpayers, and every succeeding budget would take a larger and larger bite from taxpayer resources.

Rowland and Rell are Republicans; Weicker was a Republican with a bad conscience who had not the courage to leave his party and formally join the Democrats. Republicans in the state have yet to elect a bearish Republican. Neither money nor Ronald Reagan grows on trees. But this may change as the state tailspins into controlled chaos, forcing politicians, Rell included, to make serious choices. In a flat economy in which entrepreneurial talent and money flies to other states – Massachusetts here we come, provided you axe your income tax – nip and tuck won’t do.

Hard questions, one columnist wrote, “will grow more complicated as the scale of the state's troubles continues to reveal itself. The answers will show whether Rell can summon more than symbols.”

Here is a hard question: During the good times -- a good time being a budgeting point in which no one had to make hard choices because “the little engine that could” along the Gold Coast in Connecticut continued to haul money into the state’s coffers – it was easy to fool all the people all the time. But now that the Gold Cost engine has pooped out, the usual rhetoric will not wear well on taxpayers who have just bailed out bankers and Wall Street moguls to the tune of $700 billion, so far. Where will the state get the money to stuff into its budgetary hole? Answer: no where. It is no use going begging to Uncle Sam either. He has gone begging himself.

There will be blood.

It is betrayals by the governing class that make revolutions. In a little more than two weeks, there also will be a ballot question allowing voters (read: taxpayers) to call a constitutional convention in the course of which voters may decide to institute referenda and ballot initiatives.

There is one serious objection usually put forward – as it happens, precisely by those in whose interest it is to co-operate with the present system – to sink the constitutional convention, which comes round once every twenty years.

Republican government, say some entrenched politicians, has no need of special devices such as referenda and ballot initiative to curtail the bad habits of entrenched politicians. The proper answer to this question is: Says who? Allowing a constitutional convention is a much more dangerous proposition than permitting referenda and ballot initiative. The idea of repetitive constitutional conventions is Jeffersonian in inspiration. Jefferson thought that the people should engage in revolution more often than would satisfy Connecticut’s present attorney general or its Democrat majority in the legislature. Budget referendums, common in municipalities, are not inherently un-republican. And while a so called “faction” may propose a ballot initiative, the initiative itself is disposed of by a majority of voters, presumably the same majority that continually elects to office the politicians who disapprove of ballot initiative.

When courts intervene to rearrange the pillars of society, the same folk who faint at the prospect of ballot initiate head for the hills.

So, what’s the problem?