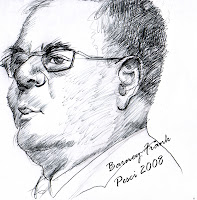 In the wake of the collapse of Fannie Mae and Freddy Mac, not to mention derivate failures such as Wall Street and Main Street, the conflict of interest prize of the decade must go to New York US Rep. Barney Frank.

“It’s absolutely a conflict,” said Dan Gainor, vice president of the Business & Media Institute. “He was voting on Fannie Mae at a time when he was involved with a Fannie Mae executive. How is that not germane?”

The Fannie Mae executive was Frank’s domestic partner Herb Moses. Frank met Moses in 1987, the year Frank uncloseted himself as a gay, and the two lived together in a Washington home until they broke up in 1998.

Moses was not without a sense of humor. In 1991 he wrote in the Washington Post, “I am the only member of the congressional gay spouse caucus. On Capitol Hill, Barney always introduces me as his lover.”

Both Frank and Moses assured the Wall Street Journal in 1992 that there was no funny business going on, conflict of interest wise, but skeptics were doubtful.

It now appears they may have had some reason to doubt.

During his tenure at Fannie Mae, from 1991 to 1998, Moses was the assistant director for product initiatives, in which capacity he would have, “helped develop many of Fannie Mae’s affordable housing and home improvement lending programs,” according to National Mortgage News. As the director of product initiatives, Moses would have been chiefly concerned with purchasing more loans and generating more security sales. His connection with a partner in congress who exerted considerable influence on the Financial Services Committee would have facilitated his efforts.

The last point at which the damage done by Fannie and Freddie might have been mitigated was in 2005. Frank strenuously resisted efforts to regulate the two Government Supported Enterprises (GSEs) then, and even now that they have tanked, Frank still resists modest reforms, according to a recent Wall Street Journal piece: “Asked about Treasury's modest bailout condition that the companies reduce the size of their high-risk mortgage-backed securities (MBS) portfolios starting in 2010, Mr. Frank was quoted on Monday as saying, "Good luck on that," and that it would never happen.

“There you have the Fannie Mae problem in profile. Mr. Frank wants you to pick up the tab for its failures, while he still vows to block a reform that might prevent the same disaster from happening again.”

Frank has opposed reforms of the GSEs for the past decade.

In 2000, then-Rep. Richard Baker proposed a bill to reform Fannie and Freddie's oversight. Frank dismissed a bill proposed by Rep Richard Baker to reform the oversight of the two companies. Concerns about the now defunct GSEs, Frank said were "overblown." He insisted there was "no federal liability there whatsoever."

In 2002, he said “"I do not regard Fannie Mae and Freddie Mac as problems. I regard them as great assets." Those asserts now belong to the Federal government. The GSEs $5.4 trillion deficits and bad loans belong to hard pressed taxpayers.

In 2003, Frank assured the media that "there is no federal guarantee" of Fannie and Freddie obligations. A month after his assurances, when Freddie Mac’s multibillion dollar scandal surfaced, Frank said, “I do not think we are facing any kind of a crisis."

When Fannie announced a multibillion-dollar financial "misstatement" in April, the imperturbable Frank once again assured the public that the two GSEs presented no risks to taxpayers: "I think Wall Street will get over it" should the two companies collapse.

We are now living in the debris of that collapse.

Frank’s conflict of interest has not been properly exposed or denounced. Now, just prior to the elections, might be a useful time for Democrat congressmen John Larson, Joe Courtney, Chris Murphy, Rosa DeLauro and her former mentor Chris Dodd to denounce their Democrat colleague’s obvious conflict of interest. And they should also consider a pledge to remove Frank from any committee charged with the regulation of banks or financial institutions.

Dodd’s troubles with Countrywide, a fraudulent mortgage lender from which he has received favors, have been much in the press lately. The multi-term senator should be the first to leap at the chance to clear the congressional Augean stables of its grosser mess-making members.

The United States of America is going to hell fast!!!!