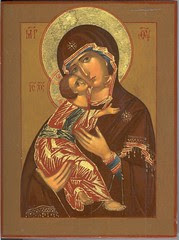 The first time I came to St. Michael's Institute on Ender's Island, I put a question to one of the women who had made several icons previously: What had I let myself in for?

She said, "You are about to pray an image into wood."


On my most recent return in November, I was at least not a novice. I had made one icon under the tutelage of Vladislav Andrejev's son Nikita a few years earlier. Vladislav Andrejev is a masterful iconographer who had learned his craft at the hands of Russian monks and then went on to found a school of iconography, the Prosopon School.

Andrejev now lives in New York, having immigrated to the United States in 1980. He has been teaching iconography in North America for more than 15 years. His icons, faithful to the Russian-Byzantine tradition, grace churches and homes both in America and elsewhere in the world.

His son looked a little bit like a Russian monk; he was tall and lank, wore a full beard that swept like a bib across his chest, and brought along with him for the occasion his Russian wolfhound, a dog about the size of a great dane. This dog, everyone remarked at the time, was incredibly well behaved. Jake, my wife's guide dog, found him, shall we say, interesting.

I returned to St. Edmund's Retreat a few years later to try my hand at illuminated miniatures, a course taught by Jed Gibbons of Chicago. An instructor at the St. Michael Institute for more than eight years, Gibbons recaptures both in his work and his classes the visual vocabulary of the ancient Christian church. Illuminated miniatures will be familiar to anyone who has viewed ancient bibles and been captivated by the elaborated letters and pictures of the Christian narrative that precede a text in scripture.

All the instructors at St. Michael's Institute of Sacred Art participated in the making of the new Chapel of Our Lady of the Assumption. The chapel embodies the gospel in stone and glass. Cut and laid by hand, as they would have been formed centuries ago by a master mason, the stones themselves evoke the time of St. Edmund Rich, 1174-1240, who served as the archbishop of Canterbury from 1234 until his death in 1240.

The island was deeded to the Edmondite monks by its former owner, Alys VanGilder Enders, the wife of Thomas B. Enders, a son of the president of Aetna Insurance Company.

Among the disciplines offered at St. Michael's Institutue are iconography, manuscript illumination, gilding, stained glass, fresco and Gregorian chant.
Two icons written by Andrejev may be seen in the chapel; the brilliant windows were made by the artisan who teaches the course in stain glass making; the walls of the chapel are circled by Gibbons' brilliantly conceived Stations of the Cross.

The making of an icon is symbolically a participation in the creation. In the process, the image continually disappears and is re-established by the icon maker. Dark grounds are laid in first, and light is gradually added as the icon unfolds, pretty much the opposite from an oil painting. Light is spiritual. So the making of the icon itself is a journey from matter to spirit. The last details added to an icon are its highlights, the purest, brightest, and most spiritual of accents. In an oil painting, and in photography too, light streams around the subject from one source, creating form and shadow; but in an icon, the light is interior. When an icon maker trails his brush through paint to write the icon, he is dipping into centuries of art history.

Peter Pearson, the iconographer who conducted our course in acrylic icons, was self taught for nearly 15 years, studied under Russian iconographer Nina Bouroff in Maryland, and also perfected his icon writing with Philip Zimmerman at the Saint John Damascus Academy of Sacred Arts, an Orthodox school of icon painting in Ligonier, Pa.

The students he patiently instructed came from all over the United States. In addition to two nuns, two priests, and two deacons, our class had in it a portrait artist who ran a large farm and a woman whose medical background and wanderings through Germany and the Middle East permitted her to start her own business in specialized medical treatments. One day, she told us, she tripped on the bottom stair in her business office and shattered her ankle.

"That was it. I sold the business, and here I am."

Everyone in the class came to Enders Island because at some impressionable point in their lives, they had been exposed to the lure of icons. One of the icon makers, the portrait painter, was here because of the importunities of her parish priest.

"I couldn't put it off any longer."

God, the Christian writer C.S. Lewis tells us, is a very crafty fellow. Everywhere, temptations reach out to us. One might find oneself caught up in a Gregorian chant, also taught at St. Michael's Institute. "Bibles are left open," Lewis says, where one might find an illuminated miniature brushing up against an elaborate calligraphic letter introducing a scriptural text. Calligraphy is also taught at the institute.

The daily regimen was unvarying. Shortly after the sun appeared over the surrounding water, we were up and off to breakfast; then to the chapel for a morning service; then to work in the studio. After laboring - truly a labor of love - over our icons for a few hours, we were off to lunch, then back to the studio. We took a break for supper and then returned to the studio, which emptied out around nine o'clock.

Every icon is an attempt to express in an image the ineffable mystery of God; and for this reason all icons, however alluring and beautiful, miss their object. They can only be suggestive. They are aids that speak in images of the theology of redemption, a glimpse of which made the angelic doctor, Thomas Aquinas, say that beside his visions "everything I have written is straw."

I wrote two icons while at St. Michael's Institute. The first is an "icon of tenderness," showing the child Jesus brushing his head against the cheek of his mother, a Christmas portent; the second is called "the image not made by human hands," a reference to the image left on the cloth of Veronica, a woman who wiped the face of Jesus as he made his bloody way to the cross.

For myself, these two icons embrace the mystery of my faith, the faith of my father, and the faith of Acquinas. Somewhere in the passage between the crib and the cross, the ineffable mystery of god awaits the hungry heart.

Enders Island is a site of spiritual renewal and Catholic prayer in Fisher's Island Sound, near Mystic. The 11-acre island offers retreats with overnight accommodations and is connected to the mainland by a bridge. Enders Island offers many programs for groups and individuals, including art classes in iconography, manuscript illumination, stained glass, and more.