The Real Cost Of Tax Increases 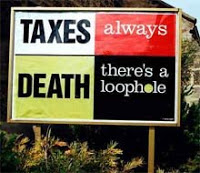 Arguing against a legislatively imposed minimum wage increase, Brian Jessurun, co-owner of four northeastern Connecticut restaurants, writes in an op-ed in a Hartford paper: “By all accepted accounting metrics, this state is virtually bankrupt. Reputable estimates place Connecticut’s unfunded liability debt at $70,000 per taxpayer, more than many of them have set aside for their own retirements. The only chance we have of getting out from under that burden is a burst of prolonged prosperity, which would increase state revenues without significantly increasing the taxes that are already driving away job creating businesses and tax paying residents.”

At last, some readers of the paper in which the op-ed appeared might exclaim – light!


We all know that artificial – read, political -- increases in the cost of labor are attended by predictable but unwanted consequences. Whatever the state taxes tends to disappear, and the anti-free market boost in the minimum wage can only be regarded as a tax on the diminishing earnings of Jessurun’s businesses.

Very large businesses may be able to absorb such expensive mandates by passing the increase in the cost of labor to its customers – or not. There is more than one way, especially for large mobile businesses to slip the noose, sometimes by moving operations out of state, sometimes by reducing hours for its full-time staff. When a large company moves out of state, the business takes with it the taxes it might have surrendered to the state, and the tax-milking by thirsty, spend-thrift legislators comes to a stop.

Small businesses that cannot move operations will shut down, thus depriving the state of expected revenues it might have reaped had the state not imposed an artificial increase in the cost of labor that businesses could not absorb.

Connecticut has yet to recover the job losses recessions always bring in its train. While the rest of the nation pulled itself out of the Great Recession that lasted from December 2007 to June 2009, almost 10 years ago, Connecticut has prolonged its recession by straining an overburdened economic engine with unsupportable tax increases and needless regulations.

So then, one might suppose that the new Governor of Connecticut, Ned Lamont, and its General Assembly, top-heavy with Democrats, nearly half of them progressives, would be loathed to heap taxes and regulations on a state that is still recovering from a recession that ended elsewhere in the nation nearly a decade ago.

Not a bit of it. Former Governor Lowell Weicker saddled Connecticut with an income tax after he had cautioned during his fraudulent campaign for governor that imposing such a tax in the midst of a recession would be like “pouring gas on a fire.” The two Republican governors who followed Weicker, John Rowland and Jodi Rell, were imperfect firewalls unable to curb the appetite for spending of a Democrat dominated General Assembly. Governor Dannel Malloy boosted taxes twice and then, as Weicker had done before him, lit out of town rather than stand for re-election to a third term in office, after having achieved an  approval rating of 25 percent.

The election of Lamont heralded a new day. He was a business man who possibly understood the importance of a flourishing economy, a man who might hasten an epoch of “prolonged prosperity that would, in Jessurun’s words, “increase state revenues without significantly increasing the taxes that are already driving away job creating businesses and tax paying residents.”

Here is a PARTIAL list supplied by the Yankee Institute of additional taxes proposed by Democrat legislators: $652 million in sales tax increases, which is projected to be up to $1.1 billion by 2022; $515 million increase in healthcare provider taxes, which are passed on to patients through higher insurance costs and payments for medical care; $480 million in toll revenue, 60 percent of $800 million in expected revenue by 2024; $340 million raised by a new 0.5 percent payroll tax to pay for paid FMLA; $163 million soda tax; $71.5 million property tax increase by 2022, to pay for teacher pension payments; $70 million income tax increase, mostly from canceled exemptions; $50 million corporate tax increase (average of two years), includes offset for elimination of the Business Entity Tax; $41.6 million in license and fee increases; $30.2 million plastic bag tax; $17.8 million in other miscellaneous tax increases, including on vaping, a real estate conveyance tax increase on homes over $800,000, and an increase in the movie ticket tax; $9 million for the gift tax repeal…

"A fool,” the old adage has it, “learns only from his own mistakes. A wise man learns from the mistakes of others."

People inside and outside of Connecticut may be forgiven for being unable to distinguish whether the new administration is foolish or stupid.