Politics In The Dark 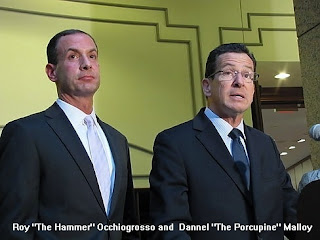 Publicity is justly commended as a remedy for social and industrial diseases. Sunlight is said to be the best of disinfectants; electric light the most efficient policeman -- Louis Brandeis

And, Brandeis continued, “Selfishness, injustice, cruelty, tricks and jobs of all sorts shun the light; to expose them is to defeat them. No serious evils, no rankling sore in the body politic, can remain long concealed, and when disclosed, it is half destroyed.”

Those in Connecticut who have been wondering whether the Lamont administration would be a continuance of the Malloy administration now have their answer, thanks in part to the honest journalism of Courant investigative reporter Jon Lender, who has lifted yet another veil. He titles his story “Confidential proposal by political consulting and lobbying firms would try to sell Lamont’s toll plan to legislators, citizens,’ though it might easily bear the title, “Here we go again: same old, same old.”

“A blunt political playbook for winning legislative approval of tolls in Connecticut highways — including ideas about dealing with ‘frightened’ and ‘vulnerable legislators’ -- … has been pitched,” Lender tells us, “ to at least one local engineering firm that could, potentially, participate in development of a system of electronic tolls as proposed by Democratic Gov. Ned Lamont.” The 24 page playbook “contained names and pictures of consultants’ ‘team,’ including Roy Occhiogrosso and Brian Durand, two former top staff members in the office of Lamont's Democratic predecessor as governor, Dannel P. Malloy… Whether or not this particular proposal goes forward, the document provides an insight into the strategy and execution of campaigns to approve big legislative initiatives, which can be lucrative for people and companies that work in conjunction with the government on such projects. It plots how to marshal support and overcome opposition. It illuminates the sort of political business that gets proposed outside of public view, and is often consummated between private interests and the people’s representatives.”

Lamont’s toll proposals – there were two of them; one proposing tolls only for heavy trucks, and another proposing tolls for everyone – have met a stiff resistance from the real financiers of the project, overburdened taxpayers, and the “resistance” filled three overflow rooms during a recent hearing of the transportation Committee at the Legislative Office Building in Hartford. The Occhiogrosso playbook is designed to encourage progressive legislators to abide by the toll venture even when met by a disapproving resistance from taxpayers. It says in 24 pages – buck-up buckaroo! Pay no attention to the murmurings of the “madding crowd,” a phrase plucked from Thomas Gray’s “Elegy Written in a Country Churchyard,” which means means “frenzied.” Indeed, the indisposition of the Malloy administration to cut spending, along with its massive increases in taxes, would drive a saint into a frenzy.

Tolling was unnecessary, many Republicans argued more than a year ago, because the state legislature earlier on had adopted a measure to fortify the transportation fund. However, “Lawmakers short-changed Connecticut’s Special Transportation Fund by $650 million between 2011 and 2017, according to a transportation funding document released by Senate Republicans — more than enough to pay Connecticut’s portion of the new commuter rail line from New Haven to Springfield, Massachusetts.”

In fact, sweeping the transportation fund has become the rule rather than the exception in Connecticut politics. According to a piece in the Yankee Institute many such “diversions” were made between the years 2014-2017. Lockboxes were easily subverted by sweeping funds before they arrived in the lockboxes. The Weicker income tax included a constitutional cap on spending that was from the beginning rendered useless, according to a decision offered decades later by Attorney General George Jepsen, because the legislature neglected to supply the definitions that would have activated the cap.

Where there is a will to avoid spending cuts, there will be a way, and Connecticut’s “fourth branch” of government, its state employee unions, in combination with cowardly legislators and pro-union governors, have made long-term, permanent cuts in spending nearly impossible.

Connecticut needs new revenue sources for one reason only: Its expenditures far exceed its revenue – because progressive legislators and governors cannot cut spending without politically cutting their own throats.

Occhiogrosso and his comrades in the consulting community will have a rough go of it in the long run. Then again, in the long run, we are all dead. In the short run, money is to be made. Lender again: the 24 page document “provides an insight into the strategy and execution of campaigns to approve big legislative initiatives, which can be lucrative for people and companies that work in conjunction with the government on such projects. It plots how to marshal support and overcome opposition. It illuminates the sort of political business that gets proposed outside of public view, and is often consummated between private interests and the people’s representatives.”

Just so: Your tax tears are their profits. This is not the first time a governor has lip-synced Occhiogrosso’s messaging. Roy-O “The Hammer” was a flak-producer in the Malloy administration; he dove into a lucrative consulting business from which he continued to supply flackery during Malloy’s second term. And now he has hitched up with the Malloy II administration, during the course of which, relying on such advice as he and his fellow consultants proffer, Lamont will attempt to convince the general public and credulous news people that two and two equals five.