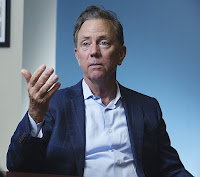 At least one Connecticut Journalist, Kevin Rennie in the Hartford Courant, believes that Governor Ned Lamont’s poorly concealed campaign lies concerning truck-only tolls will haunt him during his entire term or terms, as the case may be, in office.

“This [the campaign flip-flop] raises some long-term worries,” Rennie writes, “about Lamont’s ability to lead. Lamont may have surrounded himself with people who do not understand that the public sees campaign promises as something more than gossamer thoughts. Just as troubling is the prospect that there is no one around the Greenwich millionaire who could persuade him that abandoning a key campaign promise 38 days into his administration would inflict lasting damage on him. He will no longer be believed — a crippling wound for any governor.”

The public also will be wounded daily by Lamont’s large cache of revenue extenders. The broadening of the tax base is Lamont’s biggest Big Stick. It is likely that Lamont’s revenue enhancements may haul into the state treasury more funds than his predecessor’s two massive tax increases. Unfortunately, that stick belabors tax payers rather than tax consumers, and the Lamont administration has yet to propose equivalent, long term, permanent cost savings.

Lamont has proposed eliminating a whole series of “tax exemptions.” These “revenue enhancements” -- itself an expression that reeks of political back room dealing -- shine a revealing light on one of the principal suppositions of the progressive ideology. The progressive in heat supposes that all earnings, salaries and profits BELONG by right to the state which, magnanimously and most often for political rather than economic reasons, grants exceptions to its insatiable appetite for more and more revenue. A state tax, properly speaking, is any dollar that moves from a private wallet into state treasuries. Taxes are not made less taxing when different names – revenue enhancers or the elimination of tax credits – are attached to them. The net result of Lamont’s effort remains the same as that of former Governor Dannel Malloy.  Money that might be used to create real wealth is moved into state treasuries and progressively disbursed to consumers of special political favors such as state employee unions that have a bewitching, outsized influence over progressive leaders in the General Assembly, among them President Pro Tem of the Senate Martin Looney and union-employed Speaker of the House Joe Aresimowicz.

The legislature’s education committee recently held a public hearing on the regionalization of schools. The expression most often used by majority Democrats on the committee and pro-regionalists in the Lamont administration was the old “carrot and stick” canard. The Lamont administration, we are to understand, much prefers carrots to sticks: incentives will be offered to municipalities that agree to consolidate administrative processes.

The “carrot” is, of course, monetary remuneration to municipalities. But the carrot becomes a sick when the municipalities do not jump through the regionalization hoop – at which point state education aid will be withheld. This is as it must be. Every civic duty is necessarily supported by a sanction. No one has ever improved on George Washington’s definition of government. “Government is not reason,” Washington is reputed to have said. “It is not eloquence, it is force; like fire, a troublesome servant and a fearful master. Never for a moment should it be left to irresponsible action.”

Because government is force, it should be deployed sparingly, wisely, with a view to hurtful consequences. The carrot-stick can be a lethal weapon when deployed wrongly. Forced regionalization – of course it will be forced – brought to the legislative office building three overflow rooms of people for very good reasons.

There are in Connecticut good and bad schools; we wish to encourage the former and discourage the latter.  A policy that did so would be a boon to the general public, not to mention school children in the state. But the carrot-stick offered by the Lamont administration will do little to improve failing schools or support successful schools. The Lamont effort is not aimed at improving school performance; it does not reward quality schools by providing additional aid or sanction poor performing schools by withdrawing aid.

Even former Governor Dannel Malloy showed some interest in improving the quality of education in Connecticut. Both Malloy and his erstwhile education reforms, Connecticut Commentary noted at the time, were clubbed like baby seals by the usual suspects. But Malloy tried; both his heart and his will were in the right place.

The Lamont supported school redistricting effort is at bottom a money moving device that a) allows the state to make educational spending more progressive at the distribution end by directing  scarce financial resources from high performing schools to lower performing schools, and b) artfully clothes the effort as a measure to save the state money. This last laudable goal is to be entrusted to an administration that, some claim, will increase state revenue in an amount greater than Malloy’s two massive tax increases.

Is it fanciful to imagine people in the overflow rooms praying on their knees for the failure of forced regionalization?