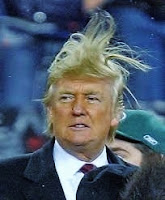 The word “establishment", it should be understood, is a fighting word among Trumpeters. Anyone who has been tainted by political office is, in the view of Trump supporters, a member of the corrupted establishment. Establishment candidates have been given the bum’s rush by primary voters this year. The Trump campaign easily managed to polish off a number of conservative Republican anti-beltway presidential candidates, including Bobby Jindal, Carla Fiorina, and Marco Rubio. Ted Cruz, recently condemned by establishment Republican John Boehner as a Luciferian constitutional conservative, unlike the former RINO Speaker of the U.S. House, is still plugging away.


The two presidential candidacies that have generated the most media attention in Connecticut are those of Bernie Sanders, a socialist running on the Democrat Party ticket, and Donald Trump, who needs no introduction and has not been condemned by Beltway Republicans as a spawn of Satan. Both the Trump and Sanders candidacies have been attended by unexpected political miracles.

Mr. Trump, who has zero experience in national politics – some would say, it shows – and Mr. Sanders, a socialist in the mold of Eugene Debs, quickly generated mighty rivers of media attention, pretty much in the way a calf born with two heads is bound to stir public interest. Mr. Trump has howled against the media during his entire campaign, surely the most entertaining part of his political side show, and yet the billionaire reality-show Barnum has spent pennies on the dollar during his rumbustious primary – because the media against whom he rails at every opportunity has provided him with cost-free exposure, a case of the victim surrendering to the executioner the rope with which he is hung.

Mr. Sanders, for his part, was supposed to have been swamped by political contributions given to his primary opponent, Hillary Clinton, by deep pocket establishment money-men, the titans of Wall Street who, in a Sanders presidency, would be consigned to a frozen Gulag in Marquette, Mich., one of the coldest cities in the US -- average snow fall  12 feet -- enough frozen fluff to bury the heartiest Kulak. Sanders was able to out-monetize Clinton by collecting widows' mites from the outcasts, the down-casts and college students who fervently hope their educational loans will be forgiven in a Sanders presidency. All the goodies in a socialist regime are free – i.e. paid for by others, usually the ravaged middle class, until, as Maggie Thatcher memorably said, “You run out of other peoples' money.”

In super-blue Connecticut, Hillary was able to snatch a primary victory from the sharp jaws of indigent college students and proto-socialists. But it was a squeaker. Sanders’ primary campaign was never as energetic or wounding as Trump’s. Clinton was vulnerable on several fronts – she slipped on blood in Benghazi and received on a private server hundreds of e-mails, a good many of which would have been given a top security clearance rating had they been processed as usual – but Sanders was prepared in his campaign to be generous and forgiving. Trump, he of the thin skin and foaming mouth, rarely forgives even imaginary sleights.

Trump’s campaign in Connecticut was successful by any measure. He grabbed 57% of the primary vote. Kasich garnered 28.4%, and Cruz, who did not make an appearance in the state, received 11.7%. Success is the golden calf of what the Trumpeters dismiss contemptuously as “the establishment,” and so it surprised no one when, two days after Connecticut’s primary, the following headline appeared in a Hartford paper: “Party: ‘Unify Behind Trump.’”

Trump and RINO Republicans are a wedding cake pair.  Jim Campbell, for six years Republican town chairman in Greenwich, puts it this way: Moderate on most issues, Trump favors a modest tax reform, and he “is not an ideologue like Sen. Ted Cruz of Texas. Campbell cites Larry Kudlow, the economic commentator and former TV host, who gives Trump high marks on tax policy."

Mr. Kudlow was considering launching a campaign against current U.S. Senator Dick Blumenthal but, perhaps frightened off by Mr. Blumenthal's obscenely large campaign war chest, eventually thought better of it. Assuming Mr. Kudlow’s sentiments were summarized accurately by Mr. Campbell, the former Greenwich Town Chairman certainly is right in labeling Mr. Cruz an ideologue on the matter of tax reform. Unlike establishment Republicans, ideologues have ideas – so do conservatives; whereas moderates have tax attorneys and the support of RINO politicians like Mr. Boehner, many of whom are crony capitalist enablers under their pragmatic skin, like Mr. Trump.