Is Malloy Cowarding-Out On His Own Education Reforms? 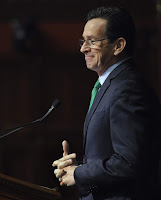 In the beginning of his administration, Governor Dannel Malloy aggressively pursued educational reform, particularly in cities where high school graduates were being pushed into colleges without having mastered the basics – reading, writing and arithmetic.

Plans were launched to uplift non-performing schools. Almost immediately, school reformers and reform-minded politicians felt the blow-back from teachers’ unions. To what extent would student testing be used to purge school systems of inadequate teachers?

Not so much, replied the reformers, as politely as possible: Data gathered from student testing would not be heavily weighted in hiring and firing decisions. Instead, the data would be used to identify “best practices” in high performing schools and replicate successful strategies in lower performing schools. In this way students locked into poor performing schools could be elevated by test data collected from the Connecticut’s public education universe.

And when the data showed that the students of teacher A were not performing up to snuff, would teacher A be paraded in a tumbrel to the guillotine? Not likely, said the reformers. However, some intervention would be necessary. The teacher in some manner first would be remediated, possibly through additional education courses.

Leaders within the teachers’ union bubble did not believe such professions, and soon the air was crackling with union pot-boiler rhetoric. The reformers wanted to throttle teachers; the data would be used punitively; and, in any case, school testing was destructive because it required an inordinate amount of time that might better be used for more necessary pedagogical purposes.

Bravely, the new Democratic Governor, Dannel Malloy, embraced the reforms and withstood the propaganda battering. Mr. Malloy threw his considerable weight behind the necessary reforms because, he said, the state could no longer tolerate an educational system in disrepair that adversely affects urban students and forces colleges to institute remedial education for students who were improperly prepared to read, write and do math upon graduation from high school.

All the data, then and now, supports the view that these important reforms are a plus + plus for both students and teachers, despite the misrepresentations of union bosses. Mr. Malloy’s educational reforms were a logical and remedial work of mercy rooted in sound premises: Some schools are better than other schools; the surest means of improving deficient schools is to note the important pedagogical differences between the two, discover what works in the better schools and replicate it in the poorer schools. Among things that don’t work as well as they should, particularly in failing urban schools, are some deficient teachers. They should be identified and counseled; if remediation does not improve them, they should be discharged, and administrators should not have to jump the moon to insure their replacement. The surest means of singling out poor teachers is to tie teaching performance to outcomes, i.e. student performance.

It was Mr. Malloy’s finest hour. And now?

Using the pretext of continuing budget deficits, Mr. Malloy has cut back sharply on state educational assistance to municipalities. It could not have come as a surprise to Republicans that Republican towns were most adversely affected by Mr. Malloy’s reverse progressivism: State educational aid is made progressive when it is withheld from the state’s more wealthy towns. Perhaps not so oddly, some wealthy towns represented by Democrats were spared the axe.

With a sigh, State Representative Gail Lavielle noted that Mr. Malloy’s raid on wealthy towns “cuts 28 towns by 100%, and they're not just in Fairfield County, but they're all wealthy, and most are not represented by Democrats.” Political calculations are never far from Mr. Malloy’s mind, particularly during election periods.

Democrats in the General Assembly are moved by the same self-calculations. Bowing and scraping before powerful teachers unions, the fourth branch of government in Connecticut, dominant Democrats, one eye fixed on re-election prospects, have fashioned a bill – SB 380 – that will, should it pass, exclude from teacher evaluations student performance data on the state’s Smarter Balanced Assessment, thus stripping and gutting the chief purpose of the education reforms first proposed with a grand flourish by Mr. Malloy in 2012 – and just in time too.

Unanimously approved by both Democrat and Republican legislators in 2012, implementing the link between student achievement growth and teacher evaluations was postponed until the 2016-2017 school year. Bill SB 380 will cut the heart out of an educational reform system that is not yet fully operative.

It is important for the reader to understand that Connecticut’s teacher evaluation system does not rate teachers on test scores alone: Fully half of the evaluation is based on classroom observations, and test scores will account for ONLY 22.5% of teachers’ evaluations when the system is fully operational. Research data indicates that student achievement increases when teachers are evaluated. In Washington DC, the implementation of teacher evaluations boosted students four months forward in reading and math scores. New Haven’s district evaluation program was fashioned in collaboration with its teachers’ union, and union representatives say that teachers have been “treated fairly” and “supported properly” – no reason to end a promising educational reform effort.

Like his counterpart in Washington D.C., President Barack Obama, Mr. Malloy has a pen he may use to veto unwanted legislation, and a phone he may use to rally support for those who suffer most from inadequate education, the poor in cities who rallied to the banner Mr. Malloy raised in 2012.