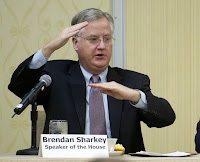 When the General Assembly, dominated by members of his own party, returned to Governor Dannel Malloy a revised budget that was $340 million out of balance, he did his duty. Mr. Malloy resubmitted to the legislature a second balanced budget that contained further spending reductions, no tax increases and no raids on rainy day funds.

In an April 16 op-ed in a Hartford paper, Mr. Malloy noted pointedly that there were only three weeks left in the legislatives session and the legislature had not yet resolved a $900 million budget shortfall for the coming fiscal year. Mr. Malloy had determined that state government could not “respond to this challenge in the same way we have in the past, that we must change business as usual at the Capitol.” This was a late realization. During Mr. Malloy’s entire term in office, state government – including the governor’s office – virtually a one-party operation, had been waiting for Godot.
In the good old days, during past recession recoveries, a rising tide had slowly lifted Connecticut’s economic boats. During the latest recovery period, the high tide by-passed Connecticut, which has yet to recover the total jobs lost during the Obama recession. Business entities in a state hammered by two Malloy tax increases, the largest and the second largest in state history, were not returning sufficient revenue to state coffers. Other businesses were moving out of state, further depleting state revenues. While expenditures had grown over the years, revenues had diminished.

Connecticut’s state treasury had for decades depended heavily on its financial sector, but it was precisely that sector that was hard hit by a lingering recession; attempts to remediate the problem only worsened it. A garroted economy was crying out for tax reduction and regulatory relief, and the national government, under the autocratic presidential leadership of quasi-socialist President Barack Obama, was piling up business costs and regulations. Here in Connecticut, business organizations were sending to the Malloy administration desperate, unambiguous messages: cut spending, reduce regulations, change the arc of politics in Connecticut and try, as best you can, to rein in the state’s fourth branch of government, state employee unions.

Mr. Malloy sprinkled some sugar on his tough medicine: "I know that I have been asking a lot of the legislature, and I know I haven't always asked in the gentlest way. But we all need to finish what we started five years ago when we set off down this less-traveled path. Structural reform, living within our means, new economic reality, call it what you like. Making it happen is within reach now."

In a fit of near apoplexy, Speaker of the House characterized Mr. Malloy’s op-ed “a public enemies list" and “a personal hit list,” after which he cancelled a meeting with the Governor. Recovering somewhat from his snit, Mr. Sharkey explained: “Hospitals, smaller towns, property tax reform, and critical social services are all dramatically slashed under the governor’s plan, all while insisting he be granted broad block grant authority to unilaterally cut further without any public scrutiny or legislative oversight. His proposal isn’t feasible, would never get enough votes from either side of the aisle to pass, and it offers no real basis for productive negotiations."

Mr. Sharkey promised to send yet another redrafted budget Mr. Malloy’s way after revenue figures have been reported at the end of April. The General Assembly’s constitutional adjournment deadline is midnight, May 4. The state’s revenue bucket is bleeding out, the Governor’s own party cannot bring itself to accept the “new reality” upon which Mr. Malloy’s efforts are based – i.e. “business as usual” is no longer an option – and it is pushing budget negotiations to the last minute, so that business as usual can be bum-rushed through a Democrat dominated legislature that has been for the last half century a captive of union interests.

There is but one person in Connecticut who can at this late hour save the state from penury and a possible future bankruptcy – Governor Malloy. He can do it by promising to veto any budget that contains tax increases, just as his political forbearer, Governor Lowell Weicker, three times vetoed a non-income tax budget sent to him by a legislature that had rebuffed his income tax proposal. Secondly, Mr. Malloy can signal to state unions – before any contract negotiations have occurred – that there are but three branches of state government, and SEBAC, the union leadership authorized to bargain with the Governor on union contracts, is not one of them. The “new reality” pressing upon all our necks with its hobnailed boots forces us to acknowledge that tails should not wag dogs. The Governor and the leadership of the General Assembly, both Republican and Democrat, are constitutionally charged with adopting policies that advance the public good, which should never take a back seat to special interests.

Rarely in Connecticut’s long history has a majority in the state’s General Assembly fiddled so irresponsibly while Rome burned.