Towards A TR Conservative Republican Party 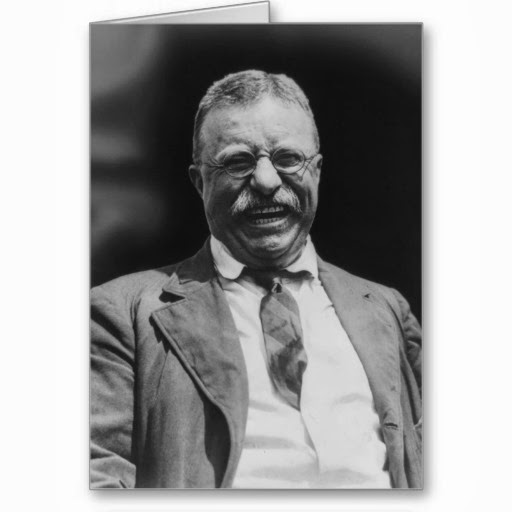 Many people may be surprised to hear that President Teddy Roosevelt, the Bull Moose megaphone and the first serious presidential progressive, was a Republican.

It is Teddy that prevents the term “Republican activist” from becoming an oxymoron. There is no question that TR –- some call him the good Roosevelt -- was what we should call “an activist.”

In the post-Ronald Reagan period -- the present era of a boisterous modern progressive party led nationally by President Barack Obama and here in Connecticut by the ubiquitous Governor Dannel Malloy -- some Republicans are beginning to ask dangerous questions: For instance, what would the policies of an activist Republican look like? Is it possible to imagine an activist conservative government that would carry us far from the modern progressive and destructive bonfire?

One of the most enticing features of modern progressivism is that it gives politicians something to do. Of course, they always go overboard, carrying most of us with them. A government that sets a minimum wage is an over-reaching government that has stopped governing. And the problem with over-reaching is simply this: If a U.S. Senator were to fancy himself a sort of populist consumer protection agent determined to guard his constituents from the ravages of sugary breakfast cereals, that senator would not have sufficient time or inclination to devote himself to the proper responsibilities of his office – say, developing a strategy to prevent Russian President Vladimir Putin from swallowing large parts of Eastern Europe and re-assembling the Soviet Union. This is what modern progressivism does: It burns down your house and then forces rug makers to sell you a carpet at a reduced price.

The conservative who chastises U.S. Senator Busybody for neglecting his constitutional responsibilities ought not to be shouted down as someone who hates government, when in fact he may be someone who appreciates much better than Senator Busybody the necessary and indispensable responsibilities of a responsible senator. But, more often than not, he is shouted down – as someone who believes cities should be allowed to rot while he twiddles his thumbs and repeats conservative nostrums concerning the dangers of an immodest omni-incompetent government.

Suppose a conservative TR, a Jack Kemp sort of guy, should come along in Connecticut and propose an “extreme” solution that would lead cities out of their jobless doldrums by means of a proposal to place business tax reduction zones in large poverty infested urban areas. If you’re a business in Hartford or New Haven or Bridgeport, for instance, you might be able to take advantage of a reverse progressive business tax that diminishes in proportion to a diminishing jobless rate in the targeted cities. Suppose reverse progressive tax reductions were applied to married couples in poverty stricken cities, individual tax reductions being greater in mom and pop households. Such a scheme might well reverse the plague of fatherless households in major urban centers. Would this not be a noble effort in reducing poverty in cities where fatherhood has become a distant memory?

One wonders how a modern TR would sell such ideas in Connecticut. He almost certainly would be instantly confronted by a governmental apparatus allied with powerful interest groups and a left of center media more intent on expanding transfer payments than lifting the poor from poverty. For every dollar Connecticut taxpayers send to Washington – a laundromat for dollars that otherwise would be invested in job production at home – Connecticut receives back about sixty-eight cents in services and rhetorical baloney. The percentage is probably similar in the case of tax money collected by the state and distributed by the General Assembly: For every dollar appropriated to alleviate poverty, a large bite is consumed by the state’s caritas apparatus. And since the advent of Mr. Malloy as governor, a portion of tax money collected is delivered, more or less as a pay-off, to multi-million dollar companies that have threatened to leave the state for greener pastures elsewhere; such tax consuming companies will be generous to the Democratic machine come election day.

Very likely any effective effort to ameliorate the condition of the poor in cities by making them independent of government succor would be a battle to the death. But then, if we could summon TR from the dust that is the final condition of all men and women – there are no rich or poor corpses – he would find a way. And that way would be shouted from bully pulpits in Hartford, Bridgeport and New Haven, whose recently elected mayor, Toni Harp, has just imposed more taxes on Mike Stratton, a New Haven alderman allied with a breakaway group of city lawmakers known as the People’s Caucus.

Mr. Stratton, a heretical Democrat in New Haven’s one-party town, was on the verge of proposing spending cuts and operational cut backs.

When Mr. Stratton rose in opposition to the tax increase levied by the wife of New Haven’s most notorious tax scofflaw, lately deceased, he was told – politely, to be sure – shut up and go away.

Anonymous said…
Great article, but there's a typo in last few sentences
8:34 AM

peter brush said…
I noticed Rand Paul citing William Lloyd Garrison with favor in his recent CPAC speech. It serves to remind us that the Republican Party was founded in "activism." The kind of action we need now is a return to the Constitution and limited government; i.e., a government that is not dedicated to any abstract idea nor to social engineering, however benign. That's to say, we need a reactionary activist party.

What, have I no concern for the poor or the afflicted? As the doctor says, first do no harm. The liberal activist agenda has damaged society as a whole, ruined our cities, and facilitated the self-destruction of soi-disant victim groups. Getting rid of social engineering, simplifying the tax code, would be beneficial all around.
-----------------
In a struggle against a revolutionary idea, it is only possible to use ideological elements which are a thousand times more radical, or adapt principles which represent a total reaction against them.

There is much declamation about the sacredness of the compact which was formed between the free and slave states, on the adoption of the Constitution. A sacred compact, forsooth! We pronounce it the most bloody and heaven-daring arrangement ever made by men for the continuance and protection of a system of the most atrocious villany ever exhibited on earth.
-----------
Roosevelt’s program of greater centralization of power in Washington and in the
executive branch took off in 1903 with the
creation of the Department of Commerce
and Labor, which contained a Bureau of
Corporations to investigate corporate behavior. “I have always believed that it would
also be necessary to give the National Government complete power over the organization and capitalization of all business
concerns engaged in inter-State commerce,”
said TR. http://object.cato.org/sites/cato.org/files/serials/files/policy-report/2002/11/chapman.pdf
8:04 AM

Theodore Roosevelt, in his Autobiography (1913), discussed the presidential office in terms of what he called Buchanan Presidents and Lincoln Presidents. The former category included those whose strict constitutional view led them to exercise power with undue restraint. Lincoln Presidents, on the other hand, had used the office to its fullest extent, yet within the authority of the Constitution. Roosevelt, who no doubt put himself in the Lincoln camp, regarded his successor (whose nomination Roosevelt had dictated) as a Buchanan President, and strongly criticized Taft's conduct in office. In a series of lectures delivered at Columbia University in 1915 and 1916, former President Taft answered Roosevelt's arguments with his own view of the office.
-------
Taft:"The true view of the executive functions is, as I conceive it, that the president can exercise no power which cannot be fairly and reasonably traced to some specific grant of power or justly implied and included within such express grant as proper and necessary to its exercise. Such specific grant must be either in the federal Constitution or in an act of Congress passed in pursuance thereof."http://www.britannica.com/presidents/article-9116971
8:32 AM