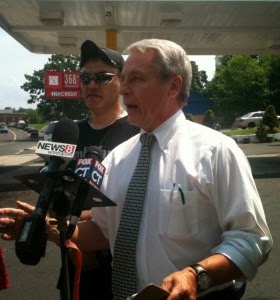 
Former State Senator Len Suzio, Connecticut's leading critic of the Early Release program, called for the resignation of Undersecretary for Criminal Justice, Mike Lawlor. Describing Lawlor as “Connecticut’s number one apologist for violent criminals, and the architect and chief defender of a dangerously flawed law." Suzio also said that Lawlor has consistently misled the public about the dangers of the program in an effort to "cover up" the flawed policy.

"Mike Lawlor has consistently used equivocal statistics to bamboozle the media and mislead the public about this dangerous law. But no statistic can cover up the fact that at least 3 Early Release convicts have been implicated in the murder of innocent citizens. Only 2 weeks ago I accompanied the grieving family of Ibrahim Ghazal to Court to watch the sentencing of Frankie "the Razor" Resto, a violent criminal let loose under Early Release, who had pleaded guilty to the cold-blooded murder of their husband and father. Mr. Lawlor's phony statistics are no comfort to the Ghazal family," Suzio said.

"The most sacred responsibility of law makers and law enforcers is to protect our families against violent criminals such as Frankie 'the Razor' Resto. Equally important is for public officials to be honest with the public. Undersecretary Mike Lawlor has failed the public on both counts. Today, I call upon Mike Lawlor to resign from office. As the chief architect and front line defender of this flawed and dangerous law Mr. Lawlor ought to pay the price and resign from office", Suzio insisted. "To Mr. Lawlor I say, '3 murders and numerous other crimes committed by violent criminals prematurely released from prison on your watch.  It’s time for you to go'”, Suzio continued.

"Finally, I call upon the Legislature to immediately repeal 'Early Release' for all violent convicts. Every day our families are exposed to dangerous criminals who have been sprung from Connecticut prisons to prey upon the innocent. It's time to recognize that this law is flawed and dangerous and must be repealed," Suzio concluded.