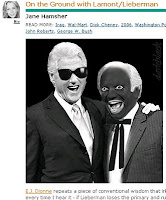 Mr. Clinton headlined a rally for Mr. Blumenthal at Wilbur Cross High School in New Haven. The rally was followed by a fundraiser considerably more modest than Mr. Obama’s earlier fundraiser in gold plated Greenwich. Connecticut always has been fertile ground for Democrats hoping to fill their campaign coffers by uprooting golden truffles in the state’s campaign rich Gold Coast. No doubt Mr. Clinton and Mr. Blumenthal were anxious to empty the pockets of those millionaires in Connecticut who had not previously been hit-up by Mr. Obama.

Mr. Clinton is no stranger to the state, and he certainly is no stranger to controversies. Mr. Clinton’s support of Sen. Joe Lieberman during the now famous Lieberman-Lamont kafuffle got him in Dutch with the more excitable elements of Democratic progressivism. The proprietor of Firedoglake, Ms. Jane Hamsher, reacting to Mr. Clinton’s vigorous support of Mr. Lieberman, ran on her site a doctored photo showing Mr. Clinton in Blue’s Brother sunglasses, his arm draped round the fragile frame of Mr. Lieberman, who appeared in blackface.

Ms. Hamsher and other progressives were considerably upset at the time with Mr. Clinton, who was unwilling to back their favored anti-Iraq War candidate, Ned Lamont. And later, when U.S. Sen. Chris Dodd threw in the towel and declined to defend his seat, the same progressives seemed to be mildly with Mr. Blumenthal’s hawkish views on Mr. Obama’s hawkish wars.

Mr. Clinton and Mr. Blumenthal were students at Yale together in the day, those carefree bygone days of yore when draft dodging was thought to be, in some quarters, an honorable pursuit. Mr. Clinton did his anti-Vietman War draft dogging in England, where he went to escape the prehensile claw of his draft board, while Mr. Blumenthal dodged service in Vietnam first through a series of deferments, and then, when President Richard Nixon instituted a lottery, by hitching up with a reserve unit in Washington DC that delivered toys to needy children. Subsequently, Mr. Blumenthal lied about his service record – several times.

Times certainly have changed. Mr. Clinton is greyer; Mr. Blumenthal’s hair has thinned; both are slim and fit. It has been reported that Mr. Clinton, having suffered a health setback, has become a vegan. The anti-war zealots, so very active when former President George Bush was organizing a surge in Iraq, have disappeared behind the flower pots. Mr. Obama and Mr. Blumenthal have become war hawks. On some points, Mr. Blumenthal and the progressive wing of the Democratic Party here in the nutmeg state have politely agreed to disagree.

Mr. Clinton, a gabmeister who tends in his speeches to wander into ideological thickets, was in fine fettle in New Haven and did not disappoint.

On economic matters, Mr. Clinton and Mr. Blumenthal and Mr. Obama and Speaker of the U.S. House Nancy Pelosi, the iron lady of the newly instituted command economy of the Obama administration, tend to march in campaign lockstep to the same tedious drummer.

Rep. John Larson, blessed with a recent visitation by Mrs. Pelosi, is the drum major of Connecticut’s congressional delegation. The political message, trickling down from those who parcel out dollars in the Obama administration to all and sundry, is simplicity itself: The recession ravaging the country is wholly the fault of Republicans who have been much too solicitous towards rapacious businesses. It is long past time that some of the profits made by Wall Street be diverted to Main Street, and this cannot be done in the absence of a command economy in which virtuous legislators such as Mr. Larson and Mrs. Pelosi first collect money from those who have it and disburse it to the have-nots.

In the modern age, Thomas Jefferson’s curse upon national debts is little more regarded by his Democratic heirs than a whisper in the whirlwind:

“[With the decline of society] begins, indeed, the bellum omnium in omnia [war of all against all], which some philosophers observing to be so general in this world, have mistaken it for the natural, instead of the abusive state of man. And the fore horse of this frightful team is public debt. Taxation follows that, and in its train wretchedness and oppression."

At one time, Mr. Clinton valued the justice of Jefferson’s remark, and it is no service to the country that he seems so reluctant to share such wisdom with the members of Connecticut’s congressional delegation.