The Simmons’ “Pause,” The Weicker Gambit 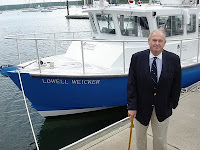 “Former congressman Rob Simmons is once again a candidate and back in the race for the U.S. Senate after a two month hiatus,” according to Dennis House of (WFBC’s) “Face the State.”

Apparently, when Simmons said he would accept the decision of the Republican nominating convention that chose Linda McMahon as its candidate to run for U.S. Senator Chris Dodd’s seat, he misspoke. Following the convention, Simmons dismissed most of his staff. His candidacy appeared to be dead in the water, though Simmons left his name on the ballot, he said at the time,

Simmons is expected to acknowledge on Sunday’s Face the State interview with House that he “paused” his campaign and, at the urging of former Republican Governor and Senator Lowell Weicker, has now resumed campaigning, an announcement that would seem to answer questions others have had concerning Simmons’ decision to leave his toe in the political water.

Prior to the “Face The State” admissions, Jim Geraghty of National Review expressed his puzzlement concerning the “commercial” run by Simmons announcing that he would still be on the ballot for the Republican primary on August 10.

Chris Cillizza of the Washington Post’s “The Fix” thought Simmons’ on-again, off-again” campaign, “suspended late in May,” was bizarre:

“It's hard to see what Simmons is trying to accomplish with the ads, besides pursuing a vanity project. A Quinnipiac poll released Friday shows him trailing McMahon by 27 points with three weeks to go… Simmons maintains he is not re-activating his campaign, which he suspended in late May due to the overwhelming financial advantage for former wrestling executive Linda McMahon, in advance of the Aug. 10 primary. But he is using about $350,000 in leftover funds to go up with an ad reminding voters that he's "still on the ballot" in case they want to vote for him. (Um, what?)”

Rep. Lawrence F. Cafero Jr., the Republican leader in the state House of Representatives, was troubled by practical questions:

"If he were to win (the primary), when he has no campaign staff, and hasn't raised any more money, then how does he expect to win in the general election?"

Cafero told The Day of New London that “he had shared his doubts about Simmons' strategy with the candidate after Simmons called to let him know he'd be suspending his campaign in May.

Enter Weicker, whose hobby appears to be hobbling Republican campaigns.

Previously on “Face The State,” Weicker, who serves on the board of World Wide Entertainment (WWE), had acknowledged that he thought McMahon a respectable candidate, perfectly capable of being a U.S. senator.

Weicker rejected Attorney General Richard Blumenthal as a dissembler who misrepresented his service in the military:

“I think that anybody that dissembles on their military service and dishonors those that served and those that died in the service of the United States, and it does not commend them, I think, to be a United States senator... If he’s going to go ahead and dissemble and fabricate over a matter like that, what trust are you going to have in that individual as a United States senator? Don’t forget, I’ve been a senator. That’s a great honor. That’s a very powerful position. And I don’t care whether the country has loosened its standards or what. I demand the highest. So there’s just no way I could go ahead and vote for or endorse Attorney General Blumenthal.”

Weicker complimented McMahon as “a very decent and fine person. I like her enormously.” He reminded House that previously he had endorsed Dodd:

“I have not endorsed her [McMahon] As I told you on your last show, Chris Dodd was my choice, that obviously I no longer have that choice. So, now the situation arises: Is it Linda McMahon, or is it Congressman Rob Simmons, who I gather is still o the ballot? And I’m not in a position to comment on that particular scenario until after the fall primary.”

One does not wish to accuse so upright a politician as Weicker of dissembling. However, Simmons is due to tell House on Sunday that he decided to take his campaign off “pause” at the urging of the non-dissembling Weicker, who is much in the habit of endorsing Democrats for high office.

In the good old days, when Weicker was a Republican U.S. Senator, he was visited in his office in Washington -- very much a dissembling town, especially during the campaign season – by Roger Eddy, the Republican nominee for the U.S. Senate. Eddy was there to solicit Weicker’s backing, and he came away from the meeting with a promise that he would be backed by Weicker100%. On the eve of the election, maverick Weicker was heard on radio spots endorsing 100% his long time friend in congress Chris Dodd, who easily could have rolled over Eddy without the dissembler’s backing. In his book “Maverick,” once reviewed by Chris Powell of the Journal Inquirer under the title “Mr. Bluster Saves The World,” Weicker makes an admission that he regretted the part he played in savaging Dodd’s father during his own campaign for the U.S. Senate, and so his support of Tom Dodd’s son may be charitably put down, in part, to a bad conscience.

In a teaser to Sunday’s ‘Face The State” program, House writes:

“During a taping of “Face the State,” Simmons explained why he is back on the scene less than three weeks before the primary. The Stonington Republican told me was encouraged to get back in the race by countless supporters and perhaps most importantly, former Governor Lowell Weicker. Simmons also said conservative author Ann Coulter of New Canaan urged him to resurrect his campaign.”

Coulter and Weicker swimming together in the same political petri dish: Truly, the political world is full of miracles and marvels. Weicker enters the political stage left, Coulter right, and they embrace center stage in one common purpose – saving the Republican Party from McMahon, in Weicker’s view a reasonable choice for U.S. Senator, in Coulter’s view a certain loser to Blumenthal, excoriated by Weicker as a dissembler.

But pray tell: Was Weicker dissembling, just a wee bit, when he told House that he could not decide between McMahon and Simmons “before the primary” on August 10? Or is it possible that Simmons will misspeak when he tells House on Sunday that he was encouraged to get back in the race by Lamont-Dodd supporter Weicker?

When did this encouragement happen?

mccommas said…
Hummm. Weicker does not need to decide since 1, he does not live in Connecticut and 2, is no longer a Republican.

I don't think McMahon is a certain loser but I do think Simmons is a better choice for lots of reasons.

Coulter said that it is true Simmons leans left on some things but he is as good as CT is ever going to get. Anyone more conservative would lose. You take your Scott Browns when you can't get a Newt or a Palin.
4:50 PM

Don Pesci said…
This comment has been removed by the author.
5:06 PM

Don Pesci said…
This comment has been removed by the author.
5:11 PM

Don Pesci said…
Weicker sold Apple Jack Farm in Greenwich and moved to Virginia for awhile, but he's back - I think in Essex or Mystic.

There are some, Weicker not among them, who believe that he never was a real Republican.

Simmons is broke. From whom will he get the money to mount a successful campaign against Blumenthal? The national Republican Party is agin'em. And the state Republican Party is not likely to favor with contributions someone who has run against the state party nominee. Deep in his bones, Simmons probably knows all this.

Some people in politics run campaigns to win, others to make a point. The same holds true in primaries. The cardinal rule in politics is that you can't defeat a nobody with nothing, and Blumenthal isn't a nobody.
5:13 PM

mccommas said…
So he is back huh? That’s to bad. Love the picture. Did anyone push him in the drink? I would have been tempted!

Simmons is still my sentimental favorite. Perhaps in 2012 he can try again. He was the best damn congressman this lousy state ever had. We don’t deserve him.
8:27 PM

Anonymous said…
Maybe Weicker is encouraging Simmons so that if he wins Liar " dick" Blumenthal will win in a landslide. Since we all know how much Weicker truly loves republicans - not!
8:37 PM