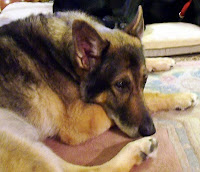 Jake is – I will postpone speaking of him in the past tense for a moment– my wife Andree’s Fidelco guide dog. He came into our house fourteen years ago, as a two year old pup, at Christmas.
And never was there such a Christmas. His markings are extraordinary. He is a Shepherd’s Shepherd, beloved of flight stewards, a magnet at the nation’s Capitol in Washington D.C. for young boys and girls obediently trailing a matronly teacher who, wide-eyed, watched her entire class descend on Jake as he moved under the rotunda, the much petted pup of San Francisco who, taking his morning constitutional from our hotel to the green, drew out from doorways and dark corners the lonely souls of the streets, the city’s unsmiling off-scourings, whose faces were transformed at his appearance.

Perhaps they had a boyhood dog. And now here was Jake, a vehicle carrying them back to a time when they knew heaven must be full of dogs. And not just any dogs but their dogs.

Jake transformed everything – first of all us, and then everyone he touched.

Those who have read these columns over the years will not have seen “I” in many of them. I (there I go again) must make an exception just this once, because it is not possible to properly celebrate a great blessing without being in some sense shamelessly focused on one’s trivial concerns.

As everyone who has had a Shepherd knows, they are one person dogs, fiercely loyal and brilliant. Jake was loyal, regally loyal, to my wife, even more so because he was a service dog. And the service he rendered liberated Andrée from, among other annoyances, me.

I still recall a phone call I received from her a few years ago past midnight, when I was watching one of the late night comics (I had insomnia). Andrée was on a business trip.

“Guess where Jake and I went today after the business meeting?”

“We were on the roof of the tallest building in Cincinnati .”

The news was not balm to my insomnia. But I knew my wife would be safe with Jake, who always reminded me, for some odd reason, of the omni-efficient butler in the P. G. Wodehouse stories. The hero of these novels was always astonished, and somewhat intimidated, by the marvels Jeeves could perform. This perfectly describes my own relationship with Jake, because I was a secondary character in the great story of our time together. Andrée was the lead. And where ever Andrée was – on a plane traveling to Cincinnati, at home and at ease, or at her desk at work, visited frequently by many of the men in her building for whom Jake was an emotional touchstone reaching back into the green sun filled days of their young years – there was home for Jake, always in his business attire, waiting for the subtlest motion from her to spring into action.

We got home from Arizona at one o’clock in the morning. Jake was to be with us the following day. A retired gent, he had spent a week with friends of ours, who had taken great care of him.

I spent part of Memorial Day in Arizona watching archival footage of the Pacific war, a bloody horror relieved in part by the presence, for a fleeting moment, of a German Shepherd in a shot with a haggard soldier, its sorrowful eyes made tragic perhaps by the black and tan markings suggesting the synchronization of pain between the soldier and his dog. It passed through my mind that these Shepherds could not understand the holiday, or the part they have played in so many wars. Shepherds never stand on ceremony. Their one longing is for the word of command. But the soldier would understand the Shepherd, and the Shepherd would understand the soldier. And that would be enough for both.

The note on the door said that whatever time we arrived home, we were to go immediately to the veterinary clinic.

Jake was a dog full of years – fourteen years of blessings, every one of which we will count in remembrance of the joy he was.

Our friends had taken him to the clinic at 7:00 o’clock . His brave heart had stopped beating, but the doctors revived him. Our friends and Jake, breathing heavily, waited five hours until we arrived. And then quietly Jake unobtrusively left us.

Valliant and honorable to the end, my wife is certain Jake waited for the touch of her hand.

very, very sorry for your loss...

I understad, and am sorry for your loss. With us it is cats. The three we've lost over the past ten years have ripped hole in our hearts that will never be filled. The breed or species doesn't matter; what matters is the perfiect love they offer to us imperfect humans.

You’re right. We’ve had cats also. One, named Misha, was feared by ever vet in the state. She permitted me to pet her exactly 40 seconds at a time, once each night. She was, and knew herself to be, the Queen of the house. T.S. Eliot, the poet, wrote about cats in his poems, and one poem was turned into a musical that was very successful. Cats don’t need you. You need them. And they know it too. I’m sorry about the loss of yours. You can get another one – without ever fearing that you will be replacing the cat, for they are as different from each other as species are different one from another. My recommendation is – get a cat.