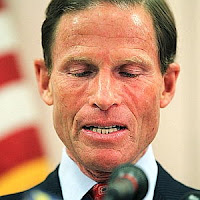 In addition to being compendiums of facts, news reports are a series of embedded impressions. Some politicians call the practice of leading by impressions "planting the flag."

In the matter of embedding impressions, Attorney General Richard Blumenthal is a rather artful flag planter. As attorney general, Blumenthal has had a good deal of practice, mostly through press releases, of convincing reporters that those people he has targeted for prosecution are guilty of the charges he has brought against them, the reporters being temptingly spurred on by the lurid charges he dangles before them like battle flags.

The reporters who receive these impressionistic press releases generally print them in full and then wait until the litigatory process has been completed, at which point they are certain to receive from Blumenthal yet another summary press release that they obligingly print, usually in full.

But the real story often lies outside the press releases, curled like some fugitive small animal amid a welter of affidavits, depositions and court documents that reporters, especially here in Connecticut, rarely consult. For them, the bookends of Blumenthal’s press releases are quite enough.

One of Blumenthal’s prosecutions is discussed in some detail here.

Blumenthal plants his flag, gets the prospective criminal – by any means necessary – and walks off, trailing after himself streams of glory.

He is not alone. Most successful attorneys general in the United States follow the same battle plan.

At the beginning of a speech  before a group of veterans, Blumenthal told an appreciative crowd that he "served in the military during the Vietnam era.” Towards the end of his speech, he said, "We have learned something important since the days that I served in Vietnam."

There were few or no reporters at the event. But an attendee recorded the proceedings for posterity and later, after Blumenthal had announced his candidacy for a U.S. Senate seat, her video surfaced in a New York Times report.

The question before the house is this: If we string both statements together so – I "served in the military during the Vietnam era. We have learned something important since the days that I served in Vietnam’ -- are we left with the impression that Blumenthal did NOT serve in Vietnam? Is it not a virtual certainty that the people who heard the whole package would conclude the speaker DID serve in Vietnam?

The answer to the question is as unambiguously clear as Blumenthal’s second statement: “We have learned something important since the days that I served in Vietnam.”

Having been more or less caught with his pants down on the question of his service in Vietnam -- the attorney general remained stateside during the war -- the Blumenthal camp now is attempting to replant its flag, which pushes to the fore yet another question: Assuming Blumenthal’s audience, including reporters, had over a period of years been laboring under the misapprehension that Blumenthal DID serve in Vietnam, is it Blumenthal’s responsibility to correct the record?

The answer to that question is “Yes.” The primary responsibility for correcting the record rests with Blumenthal.

Blumenthal sought four or five draft deferments. When Lyndon Johnson came into office and threatened to make such deferments less likely, he voluntarily joined a military group that kept him out of the rice patties.

Now, by itself, there is nothing wrong with all this. But one need not rely on a Times news report to conclude that Blumenthal was successful in his attempts to avoid active service in Vietnam. One does not need to read a news report to conclude that Blumenthal knew he did not serve in Vietnam, having made such strenuous efforts to avoid doing so.

So, it is a settled matter that HE KNEW HE DID NOT SERVE IN VIETNAM.

No one has yet questioned the veracity of Blumenthal’s statement, made on video, that he DID serve in Vietnam. And the province of the tape does not change the assertion.

It may surprise the general public – but it will not surprise reporters at all – that many stories about candidate A come from opposition candidate B, who would dearly like to see candidate A hung on a scaffold in front of the Old State House in Hartford, sentiments usually returned in full, in due order, by candidate B whenever the opportunity presents itself.

This is how stories are made in the journalistic sausage factory.

According to a survey of some prominent Connecticut reporters made by Colin McEnroe on his blog site “To Wit,” most Connecticut news reporters cannot recall Blumenthal saying that he served in Vietnam. There is in this crowd, as usual, the noxious exception. The assertions on the tape were not made by Blumenthal to Connecticut reporters. But why would McEnroe or any of the news people whose responses he has collected suppose that Blumenthal would make such assertions to people who had the wherewithal to fact check those assertions, when (see above) HE KNEW HE DID NOT SERVE IN VIETNAM ?

There is no political profit in that, and Blumenthal is a man who has learned in the course of his twenty years as attorney general how to wring a profit from a reporter.

Those who have eyes to see will see. Those who have ears to hear will hear. Two days after McEnroe's critical examination of the Times report, Greenwich Time, Blumenthal's hometown media ran a new report detailing other occassions during which Blumenthal claimed to have served in Vietnam.

Unless, for some reason, they don’t want to see or hear. Among these may be numbered Blumenthal as a party, one hopes, of one.

Other Connecticut reporters are now being invited to join that party. They should resist the invitation.

Richard Hanley, a journalism professor at Quinnipiac, whose comment appeared in the commentary section of "The Connecticut Mirror" got it exactly right, and Connecticut media, massaged so lovingly by Blumenthal, should pay heed:

“The Connecticut press corps did not notice Blumenthal's occasional inconsistencies with his own record as it raced to reproduce news releases trumpeting victories over Big Tobacco and MySpace, among many others, on behalf of Connecticut citizens. To be sure, the dispersed locations of the remark, generally offered during rubber-chicken-and-cold-peas talks around a state with one hundred and sixty nine towns covered less and less by statewide media, made it difficult to detect moments when Blumenthal strayed from his record. Still, the media needed to be as aggressive with Blumenthal as they ordinarily are when covering other elected officials.”

Beyond this suppurating mess, lies the question whether the same standards used by Blumenthal in his many prosecutions should apply to the prosecutor himself. That question is intelligently presented here under the headline “Why Should Anyone Give Blumenthal A Break?”