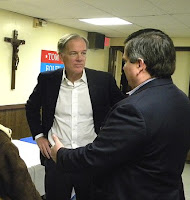 We often speak of politicians growing in office. Unfortunately, many of them grow down rather than up; the expression is not always complimentary.

Tom Foley, who has about him a sort of Gary Cooper appearance, has grown up in his campaign. Some media personalities shadowing him have neither noticed nor appreciated the growth, but seem to be interested solely in the least interesting aspect of the guy: his money.

Foley, a Republican running for governor this year, is a millionaire businessman.

Connecticut is rich in them, for the time being. Many of them are clustered in what is often called, sometimes derisively, Connecticut’s Gold Coast. Three other millionaires from Greenwich, the Hollywood of the state’s Gold Coast, are running for office this campaign season: Attorney General Richard Blumenthal, a Democrat who hopes to occupy U.S. Sen. Chris Dodd’s seat; Linda McMahon, a Republican running for the same seat; and Ned Lamont, a Democrat running for governor;

The rest of the gubernatorial and U.S. Senate candidates were born in log cabins, which is another way of saying they are not millionaires.

Briefly, there are two kinds of millionaire politicians in Connecticut, beloved and non-beloved. Lowell Weicker – also a millionaire, also from Greenwich, a longtime Republican U.S. Senator – wore his millions well, which is another way of saying that the media did not press his millions upon his brow like a crown of thorns whenever he mounted a stump to rail incessantly against the Republican Party.

FDR was a millionaire. The media of his day loved the guy. Many congresspersons in Washington, beloved and non-beloved, are not cash poor.

The kinds of millionaires who are not beloved are usually: a) unapologetic Republicans or b) Republicans born on the wrong side of the ideological tracks who make money and then run for office. Great wealth, in other words, generally is not a bar to office for: c) wealthy Democrats or d) wealthy Republicans who are of the liberal-progressive persuasion.

To put it bluntly, money is a cudgel used by liberal partisans with which to beat Republicans or Democrats who sport libertarian or conservative notions. Big yachts matter far less than big ideas.

Foley, somewhat like Weicker – though, of course, far less liberal – wears his millions well. Unlike FDR, who flouted a cigarette holder and a patrician accent, Foley doesn’t act the part of a millionaire descended from some jewel encrusted deus ex machina anxious to shower humankind with tax money lifted from other people.

He is preeminently a business man who has dedicated a large chunk of his life to public service: What you see of him and hear from him is authentic in a time and day that hungers for authenticity.

Columnist and Managing Editor of the Journal Inquirer Chris Powell notes that Foley may be “the least forceful speaker among [Republican] candidates, but he is not the least thoughtful… He also argues that successful business people like himself may be closer to working people than career politicians. He would have state government contract out more of its services. He has a special interest in charter schools like Amistad Academy in New Haven and sees public service as a duty for those who can afford it. Nobody went to hot, dirty, and dangerous Iraq to get a sun tan, even if Ireland was a lovely reward.”

When Powell, tirelessly advocating for years for an end to binding arbitration, asked the candidate at a recent interview on Face The State whether he would favor a repeal of the process that removes from the bargaining table all democratic control over the state’s budget destiny, he was taken aback by Foley’s short and sweet, Gary Cooperish, answer: Sure he would.

The arc of Foley’s campaign is pointing in a promising direction. Recent polls show him leading his rivals by a substantial margin. And the bump in the polls cannot be attributed solely to the money Foley has spent on television ads. He has done his footwork, and the results show in his sometimes brutally frank answers to hard questions.

He lacks the polish of a politician over whom the beltway waters have passed for years, smoothing the rough edges until they have the feel of silk. He has not yet been spoiled by years perfecting his narrative on the political stump, not at all a disadvantage at a time when folk hard pressed by grasping politicians are looking for an honesty that hurts and a refreshing authenticity in their representatives.