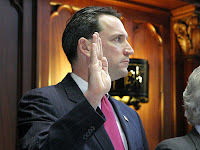 Hartford Courant investigative reporter Jon Lender has noted that that Paul Doyle (D-Wethersfield) engaged in some “sticky” business in 2008 that has now come back to prick him:


“Here's how it all started: In late October 2008, The Courant published a relatively short story that said Doyle, a lawyer who is paid tens of thousands of dollars a year as an outside counsel to the state's trash agency, got the agency to delay paying him his full fee in 2007 so he could bypass a law designed to restrict state contractors from contributing to political campaigns.

“Doyle billed the Connecticut Resources Recovery Authority for legal work in September 2007, and the agency issued him a check the following month for $4,016. But he returned the check Nov. 1 — and then, in January of 2008, the CRRA issued him a new check for the same amount.”

Doyle said he had engaged in the creative accounting because had his fees from CRRA exceeded $50,000, the law would have considered him a “state contractor,” and as such neither he nor his law partners could have made contributions to candidates they supported.

A clever legal pate can always find a route around an inconvenient and burdensome law or regulations.

Much ado was made about Doyle’s artful dodge by his Republican campaign opponent Ralph Capanera and Republican Party Chairman Chris Healy, recently styled by Doyle as his opponent’s “political assassin.”

Doyle won the election, but alas not every matter may be settled at the ballot box. Healy requested in February that Attorney General Richard Blumenthal investigate Doyle for tax evasion.

“Doyle did this,” Healy wrote to Blumenthal, “to postpone reportable income for 2007 and to avoid meeting the definition of 'state contractor' which would implicate and jeopardize his elected position as state senator." Healy regarded the acceptance by CCRC of Doyle’s creative accounting a "special treatment from a state agency" that gets fees from municipalities' tax revenues, and he reminded Blumenthal of his pledge to “vigorously pursue” tax evaders to the very gates of Hell.

A month went by and Healy received a missive from Blumenthal advising that he had passed the buck to the Department of Revenue Services "for its review and action as appropriate." The attorney general also noted that since Healy was alleging “possible criminal law violations, you should be aware that the DRS Division of Collections and Enforcement has … the power to make arrests where warranted, and to refer cases to appropriate criminal authorities for prosecution when necessary."

Piqued at Healy’s persistence, Doyle alleged political assassination; Lender admonished Doyle about “sticky” situations; and the raucous crowd that bays from the rooftops whenever a Republican wanders into “sticky” situations quickly fell into its usual stupor.

it's good to see this information in your post, i was looking the same but there was not any proper resource, thanx now i have the link which i was looking for my research.

I visited this blog first time and found it very interesting and informative.. Keep up the good work thanks..