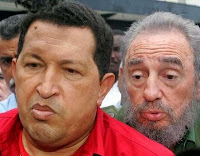 Plunging ahead where even the angels of al-Qaeda fear to tread, socialist strongman of Venezuela Hugo Chavez appears to be softening toward the new prospective American president.

According to a Reuters dispatch, Chavez offered to hold talks with President Barack Obama “to improve ties between the superpower and one its biggest oil suppliers.”

“Chavez, a socialist who has mocked President George W. Bush and calls ex-Cuban leader Fidel Castro his mentor, has said there is an inevitable clash between U.S. and Venezuelan interests, although he has at times offered to ease bilateral tensions.”

Chavez expelled the US ambassador to Venezuela last September after one of his usual snits.

"We are not asking him to be a revolutionary, to be a socialist,” Chavez said of the new president, “We just want the black man who is about to be the U.S. president to have enough stature for the times the world is living through.

"I send an overture to the black man, from us here, who are of Indigenous, black, Caribbean, South American race.”

Obama, no doubt, will want to rise to the occasion. Hope demands it.