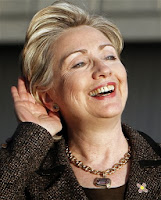 According to recently released tax information, the former First Couple earned $109 million over the past eight years, a tidy sum that puts them among the top .01% of taxpayers. The Wall Street Journal reminds us that, with the Clinton’s, charity begins at home.

“Meanwhile, the Clintons also made liberal use of the charitable deduction, claiming $10.2 million in charitable giving over the eight years. Intriguingly, nearly all the donations went to the Clinton Family Foundation, which has disbursed only half the money. The Clintons can thus use the foundation for, er, strategic giving, such as the $100,000 it donated last year to a local South Carolina library – the day after Mrs. Clinton debated in that key primary state. There are other examples of such politically targeted philanthropy, and it's worth noting that most of the foundation's disbursements came only after Mrs. Clinton announced her Presidential run.”

Mark Penn, pollster in chief of the Clinton campaign, has been shown the door. According to a Breitbart report that references a report in the Wall Street Journal,
Penn met with Columbian officials to “help craft strategy to move the Colombian free trade agreement through Congress.

“Colombia agreed last year to pay Burson-Marsteller,” Penn’s firm, “$300,000 to help "educate members of the U.S. Congress and other audiences" about the trade deal and secure continued U.S. funding for the $5 billion anti-narcotics program Plan Colombia.”

This is a problem because Clinton, nudged by Barack Obama’s soaring rhetoric, opposes the Free Trade Agreement.

Penn apologized for his miss-step but Hillary, not in a charitable mood, canned him anyway.

On Saturday, the Colombian government, announced it had fired Burson- Marsteller owing to Penn’s "lack of respect" for Columbia.