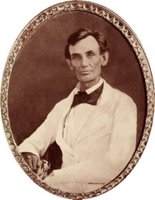 Political debates, since the justly famous Lincoln/Douglas encounters, have been vastly overrated. The notion that one may deliver a knock-out blow in a debate is for the most part a fiction. It was a fiction during Lincoln’s day also.

Far more important than the Lincoln/Douglas debates -- the messages of the candidates -- was the medium. Newspapers of the day were frankly partisan. Lincoln himself wrote fake editorials, not under his own name, for Republican papers. And the truest accounts that we have of the debates are to be found, oddly enough, in the opposition press.

The most accurate accounts of Lincoln’s addresses are found in anti-Republican newspapers. Why? Because pro-Lincoln papers would guild his speeches so as to make them more stirring and convincing to a Republican readership; whereas the opposition paper would produce a true, unvarnished stenographic record of Lincoln’s address, taking care to burnish Douglas’ response. Also, Lincoln and Douglas agreed to disagree publicly, without fear their messages would be unacceptable to some ideal non-partisan auditor, whose genuine interests are supposedly represented by some ideal objective media.

Things have changed since those good old days. The mainstream media now strains for a Potemkin Village “objectivity” that falls to the ground at the slightest critical touch; political debates, causing everyone to doubt Darwin’s evolutionary theories, have devolved to gaudy press conferences studded with sound bites embedded into speeches by overpaid consultants; and the parties, at least in Connecticut, have all but disappeared. When parties and politicians become non-partisan, poof go the parties.

A clue that something has gone awry is furnished by the demand that the parties themselves should be non-partisan. Let’s see – a non-partisan party; isn’t that just the dearest oxymoron? Then too, Connecticut is quickly becoming a one party state and, as any furioso pro-Ned Lamont blogger will tell you, it ain’t the Democrat Party that’s calling the shots. The ruling party is the Perpetual Party or the Incumbentocracy, the “In’s” who never get out.

DeStefano has had a devil of a time piercing what must seem to him the governor’s impenetrable hide. It is not that DeStefano’s arrows are blunt. But they are all aimed at Rell’s well protected left flank, and there has been no assault on Rell’s exposed right flank. The Democrat gubernatorial primary has driven DeStefano far to the left. That is, indeed, the problem with primaries: They drive Democrats to the left and Republicans to the right. In DeStefano’s case, the drift to the left has left Rell in charge of what one commentator has called the “vital center” – in fact, a static doldrum in which nothing moves or breaths --and general election battles are decided on that terrain.

The Democrats are just two House members away of achieving a veto proof majority. With a veto proof majority in their arsenal, leading Democrats would be able to pass their legislative agenda without fear of effective opposition from either the governor or the disappearing Republican Party. That agenda is being shaped largely by DeStefano, whether he wins or loses. But if Rell emerges victorious, much of the program hammered out by DeStefano and Malloy in their primary is likely to be discarded by ruling Democrats in favor of more moderate baby steps forward towards the social paradise that gleams in DeStefano’s eyes whenever he mounts a podium.

The governor already has given way to the Democrats on any number of issues. The “battle against sprawl” has been for some time a cause celebre among leading Democrats and influential “non-partisan” media outlets, and Rell recently has indicated that she too finds sprawl utterly distasteful.

For those who wrinkle their noses at it, sprawl is "unmanaged" economic growth. For libertarians and “good government is small government” folk, sprawl is the outward movement of business and industry from urban areas to suburbia, an economic big bang phenomena that began when medieval walls began to disappear around fortified castles. There is, in fact, no such thing as unmanaged growth. The outward movement from castle to city and city to suburb so far has been managed – some would say ineptly – by the same invisible hand that shapes the general economy, a hand too restrained for those who prefer meddlesome, inefficient and expensive beauracracies to free market arrangements.

It would take a Lincoln and a Douglas to present to Connecticut citizens the real choices that likely will affect their futures for years to come. But their day is gone, never to return.