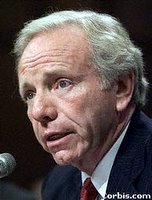 L’affair à La Renaissance was arranged by conservative talk show host Brad Davis. Over six hundred people showed up at La Renaissance in East Windsor to munch on lunch and listen to Sen. Joe Lieberman -- dogged by video bloggers, sulfurous anti-Vietnam war protestors, his ancient nemesis Lowell Weicker, and Democrat nominee for his seat in the senate Ned Lamont – do his shtick.

Ten or more points up in the polls from what once was a neck-and-neck race, Lieberman is cautious but full of energy, a contagion he might have caught from genial host Davis, red haired, benevolent and of indeterminate age. An attractive woman at table told me while eating her baked scrod, “I used to listen to Brad during the old Milk Show days.”

That was long ago. American Bandstand was all the rage, and Elvis had not yet stuffed himself to death with doughnuts.

All the fast friends of Brad Davis were there: the king of “Blueberry Hill,” Davis’ nettlesome radio antagonist and Red Sox fan Ace Gizzardi, the honorable Judge Arthur Spada, the inexhaustible Fr. Ed Nadolny, and hundreds of Talk of Connecticut listeners.

The national media was not present in force. For them, the Lamont bloom appears to be off the rose. The ten point dip is a killer. It would be a real “man bites dog story” if Lamont actually won. But what have we in the offing: “Incumbent smashes challenger?” Ordinary as rain. Besides, the national media is chasing another hot story at the moment: “Republican Congressman Gropes Aides in E-Mails.”

The ambitions partisan video bloggers that have stalked Lieberman failed to make an appearance, though a functionary from ReclaimingthePropheticVoice.org was handing out what appeared to be church circulars. And “The Kiss,” a Paper Mache mise en scene that captured the MOMENT when a grateful President George Bush whispered sweet nothings into Lieberman’s ear on the floor of the U.S. Senate apparently had been mothballed after the primary. It just might, you understand, harden the prophetic love affair between Lieberman and Republicans in Connecticut who apparently, if polls are any indication, will not be voting this year for the Republican nominee to the U.S. Senate, Alan Whatshisname.

Video bloggers are purposeful folk. They are not journalists, exactly; journalists pose questions. The video blogger’s approach to truth is somewhat different. His idea is to shape a question in the form of a dagger and plunge it into his victims’ breast. Since we’re dealing with a repeatable product here, the murderous moment may be frozen into a painful clip and shown ad nauseum, in dozens of different venues, roughly forever, or at least until the victim collapses in a pool of his own blood.

Impatience, seasoned with rudeness, is the very essence of video blogging; and, of course, one must be willing to say or do anything to insure the victim’s discomfort. The victim usually does not know what to do when accosted by a determined video blogger, even when he has met the assassin dozens of times and sees the point of the dagger protruding from his belt. Lieberman tends to treat video bloggers as if they were local journalists sent out by their editors and armed with prefabricated questions that later may be molded into editorial bullets.

He is unfailingly polite, humorous in a Lieberman sort of way, and his answers to a video blogger’s pointed questions usually are weighed down with tons of gravitas, as if he wishes to crush the murderous moment by pounding it with nuance. The video blogger is never on the scene, however, to gather information. His questions are like Prufrokian streets: “Streets that follow like a tedious argument/ Of insidious intent.” He is there “to murder and create.”

This bright Columbus day, the pest stayed home, awaiting his moment. Inside, the friendly crowd moved like a nuzzling cat, and the warmth of Walt Whitman’s “democratic mass” pressed upon the speaker.

Finally, after repeated lashes of the knout, Lieberman was treated to raucous applause and friendly faces. Happy days were here again.