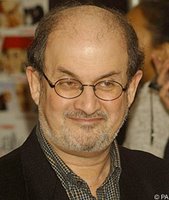 After being forced underground for ten years at a cost of £1 million a year, the price of bodyguards in Merry Old England, Salman Rushdie, author of the Satanic Verses -- which got him a fatwah from the Ayatollah Khomeini – has lost none of his fizz.

"Speaking as somebody with three sisters and a very largely female Muslim family,” Rushdie said during a recent interview, “there's not a single woman I know in my family or in their friends who would have accepted wearing the veil.

And here’s the fizz: “He [Straw] was expressing an important opinion, which is that veils suck, which they do. I think the veil is a way of taking power away from women."

Although the fatwah against Rushdie presumably has been removed, opinions of this kind are not likely to earn the author a gold star among what some conservatives have fancifully called the Islamofascists.

The Islamofascists would be those who murdered artist and film maker Theo VanGogh for having made a similar point in his film “Submission,” written by Ayaan Hersi Ali, who recently moved to the United States to escape a similar fate.