Some Stories Just Tell Themselves 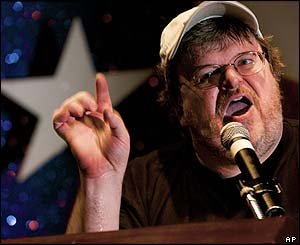 BAGHDAD (Reuters) - An Iraqi militant group has produced an elaborate video of what it said were attacks on U.S. troops, in the latest example of the increasingly sophisticated propaganda war being waged by Iraqi insurgents.

"The Code of Silence" was posted on the Internet by the Rashedeen Army, thought to be a relatively small Sunni group which has produced videos in the past of attacks it claims to have carried out.

At almost an hour in length, it is the longest and most professionally made of recent postings by mainly Sunni militant and insurgent groups fighting the U.S.-backed government.

The U.S. military said earlier this week that recent intelligence indicated al Qaeda in Iraq was refining its strategy by producing propaganda and adding a political base to its violent campaign of suicide bombings.

It was not possible to verify when the documentary was made or the authenticity of any of the images portrayed by Rashedeen, whose name means Army of the Rightly Guided.

At one point, the documentary cuts to a scene from Moore's 2004 award-winning film where he lobbies on the steps of the U.S. Congress in Washington.

"After all, there are honest and influential guys in America and if Mr Moore can talk to you like that, so can I," the Rashedeen narrator says.

In addition to numerous bomb and rocket attacks, the documentary also shows two militants painstakingly drilling a hole into an old artillery shell, turning it into a homemade bomb and then burying it to create a deadly trap.

"In the good old days of the invasion, this used to be a one-man show. Not any more. Your boys have become smart. They started to ambush us. Today it takes a big unit.

"That's good. It means your boys are on the run all day long, seven days a week. And it is really devastating for them, especially if they are on their third tour and don't have our secret weapon -- patience."

Why are you blaming someone other than your Inept Commander in Cheif for this?

Aren't you embarassed that the idiots you voted for couldn't take the best equipped and funded military in the history of man and defeat and control a very small country like Iraq?

Your candidate for Senator,Joe Lieberman,just announced his 18 yr old son is "studying abroad come September in Israel" instead of enlisting.