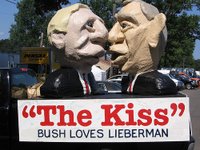 On the day after Connecticut’s bruising Democrat primary, early supporters of “Crashing the Gate” primary winner Ned Lamont, among them the Reverends Jesse Jackson and Al Sharpton, were jubilant.

Prominent Democrats who previously had supported the now ejected Sen. Joe Lieberman, among them Sen. Chris Dodd and Rep. John Larson, joined hearts together on the dais with a smiling Lamont.

Once again, primary wounds have been bound up, and Democrats have become one big happy family.

However, the glad tidings have not reached Surfing Bird, nesting in the Nedroots, who offered the following comment on a much read progressive blog site:

My fellow Nutmeggers: we can't let this stand! If Lieberman gets away with running as an Independent, it will set an unhealthy precedent. Next thing you know, candidates all over the country who lose their primaries will run as Independents, and the whole primary process will be rendered meaningless.

We need to make sure the next three months are pure hell for Traitor Joe. We need to show up at his campaign events with protest signs, the Kiss Float needs to keep stalking him, and we need to yell and scream and make our voices heard.

Come on Surfing Bird, get with the show. The programs in general elections and primaries are qualitatively different, because the audience is different and the message must be carefully tailored to appeal to a more diverse group of respondents. The Kiss float is not likely to energize moderates and unaffiliated voters. The campaign has entered its bridge building stage.

Anonymous said…
Maybe a float showing Jesse and Al kissing Ned, one on one cheek, the other on the other - though which of the two would be standing to Ned's left?
10:14 AM