Objects May Be Bigger Than They Appear 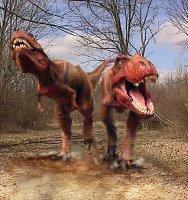 There is a scene in Jurassic Park in which the driver in a vehicle looks in his rear view mirror and sees for the first time a Tyrannosaurs Rex gaining on him; a little white message on the mirror informs us that “objects may be bigger than they appear.”

Alfred Hitchcock would have loved that touch.

Mayors John DeStefano and Dannel Malloy, both in hot pursuit of Democrat primary votes, have not glanced in their rear view mirrors lately.

The one thing that Democrats despise -- even more than President George Bush -- is puffed up moralists; in this respect, one thinks of Sen. Joe McCarthy, beset with personal problems and an aggressive moralist, charging that one of Joseph Welch’s attorneys had ties to a communist organization. Welch, a Boston lawyer the Army had hired to represent it in the Army/McCarthy hearings promptly denounced McCarthy with the scorching words, "Until this moment, Senator, I think I never really gauged your cruelty or your recklessness." And when McCarthy persisted in his attack, Welch launched this bazooka: "Let us not assassinate this lad further, senator. You have done enough. Have you no sense of decency?" -- perhaps the most annihilating retort in recent American history.

As the primary finish line comes into view, DeStefano appears to have put the pedal to the metal in an attempt to convince the last progressive Democrat standing that he, not the pretender Malloy, is the genuine progressive article.

Does Malloy have a health care plan? It cannot be as progressive as DeStefano’s. Are Malloy’s energy and transportation plans forward looking? Sure, but they pale in comparison with DeStefano's. Does Malloy boast that he has created affordable housing in Stamford? There is too much carrot and not enough stick in the solution. DeStefano would withhold state grants and bonds for such amenities as ball fields, libraries and other local projects if towns do not shape up and build more affordable housing. "If you want to live like an island, God bless you," DeStefano said. "Finance your own projects."

An equal opportunity denouncer, DeStefano reacted – some would say over-reacted –in the time honored fashion of a progressive over-achiever to Governor Jodi Rell’s announcement that she planned to create special gun courts in shoot’em up cities. "This is a plan,” he said, “I would expect to see from the governor of Mississippi in the 1950s. Rell has done nothing to support the African American community of Hartford.

In DeStefano, progressivism has found its Savonarola. But primaries have a way of ending, at which point the influence of true believing progressive Democrats will be considerably reduced. The Tyrannosaurs Rex in the rear view mirror is the general voting public, an amalgam of Republicans of all stripes, Democrats of all stripes and unaffiliated voters. Progressives are the tail; the general voting public is the dog. Tails wag dogs only in fairy tales, and the Tyrannosaurs Rex is much bigger that it appears in DeStefano’s reckoning.

Democrats face a similar problem in their senatorial primary should supporters of primary challenger Ned Lamont succeed in ousting current Democrat senator Joe Lieberman, an ardent supporter of a war that is not popular in Connecticut. After the primary comes the general election, the pursuing Tyrannosaurs Rex.

Among the general population in Connecticut, Lieberman continues to be popular; and according to a May Quinnipiac University poll, “only 15 percent (of Connecticut voters) would vote against a candidate based only on his position on the war,” the centerpiece of Ned Lamont’s campaign. Lieberman recently served notice that he would run on an independent line should he lose the primary, a strategic move that should firm up support among Democrats who have not already pledged their troth to Lamont.

Should Lieberman win the primary, mainline Democrats will breathe a sigh of relief, and Lamont supporters will be sorely disappointed. Should Lamont win the primary, the “Nedheads” will be congratulating themselves at having displaced a senator who is more popular than Sen. Chris Dodd with a politician who may not be able to outpace the Tyrannosaurs Rex now visible in the rear view mirror.