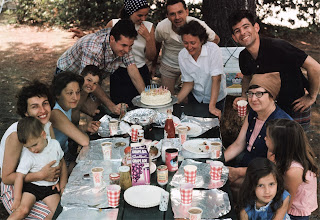 The snow seemed deeper in those days because you had to shovel it in preparation for Christmas, when the guests would be coming. The Pertusi boys, John and Anthony, generally arrived early, full of smiles and hellos, and the winter of '57 was obliging. We hadn’t had much snow prior to Christmas.

There was always lots of glad-handing and, if I may say so, just plain glad-handling within our family because we were Italians, and Italians never really know a thing until they have handled it. Well, think of it: When you hug a person, you’re drawing him or her into your open heart. Now, this never presented a problem if the two huggers were male, though some people frown on that sort of thing. And for us, there was no problem hugging or bussing an aunt on the cheek, provided you were really happy to see her, which was nearly all the time. But we drew a line with female cousins. I won’t say we were stand-offish – not at all. But we were cautious.

In 1957, we were a dozen years on the other side of World War II, marching steadfastly towards prosperity.  My sister and I were 14, she feeling like 18, that mystical age in which suddenly you became a grown-up and could do pretty much whatever you like, provided your dad approved. There was never a question of keeping secrets from him.

Christmas began with the arrival of the Pertusis by train, which deposited them at the old station on Main Street, shortly after my father bought a tree from the boy scouts, who always set up at the bottom of the intersection of South Main and Suffield Streets, a hop, skip and a jump from our house.

My twin sister Donna insists to this day that the scouts sold the worst trees ever, perhaps a sleight exaggeration. Somehow I was under the impression that my father was averse to having strange trees and strangers in the house – plumbers particularly -- and his choice of trees may have been a way of grudgingly satisfying the wants of my mother, who was a stickler for tradition and propriety. In any case, our Christmas tree, even after it had been decorated, always seemed to want fullness.

Many years later, when I was as shorn of branches as  those bygone trees, Donna circulated a picture of me embracing a boy scout tree before hauling  it up the short incline to our house, painted at the time a forest green to compliment the two giant blue spruce trees that fronted 1 Suffield Street in Windsor Locks.

My mother Rose, a practical woman, admired those spruce trees, which provided a barrier from prying eyes when we all gathered on the Pesci porch on spring and summer evenings, just as the sun was kissing the horizon.

Our house and porch was the Grand Central Station of our family. The back door -- the front door being reserved for less frequent visitors -- was a turnstile that admitted nearly every close and distant relative in town, as well as near and distant acquaintances of my father, such as the superintendent of the town dump. On occasion, the family, most especially my uncles Tommy and Charlie, went dump-picking, dragging home items such as the shutters that still adorn the Suffield Street homestead, unappreciated by the owners who had deposited them in the dump, people who, as Oscar Wilde once said of the unsentimental cynics of his day,  knew the price of everything and the value of nothing.

We should try to remember the people we love in their beauty and strength.

My mother’s kitchen was the site of many an evening poker gathering of raucous uncles and aunts.  Getting the kids out of the way was an art rather than a science, and this always required a certain amount of misdirection. Poker days were scheduled for the weekends, usually on a Friday late at night when Don, Donna and Jim were abed.

My bedroom, shared with brother Jim until he was married and moved out of the house, was near enough to the kitchen so that, pressing my ear to the wall, I could hear, though never distinctly, the shouts of triumph and moans of despair piercing the slats and plaster as the poker game proceeded. To say the truth, Rose and Aunt Nellie, married to my uncle John, were better poker players than any of my uncles – Tommy, Charlie or John. A fourth uncle, Ray, was already tucked away in Long Island, New York, living the good life, along with his wife Leatrice, who was partial to fox-fur, mink and Cadillacs.

The Christmas of 1957 was mild by New England standards. It was cold and grey, but the snow, a paltry 7 inches in December-January, was easily managed. We were used to the train hooting at night, when all our senses were alive to the surrounding sounds: cars, headed in the direction of Hartford or Springfield, passing on the main thoroughfare, Mr. Curtie’s (SP) mutt longing for the lost sun and barking in the distance, laughter coming from the kitchen, someone asking someone else “Pass the butter,” the someone else replying curtly, “Get it yourself.” On the table was a large pot of steamers, small dishes of melted butter, ashtrays filling with butt ends, and family familiars – the boys, Tommy, Johnnie and Charlie, and the girls, Rose, Dottie, Mary and Nellie – laughing, boasting, telling stories, cracking jokes, gleefully spreading doubtful rumors, all of them refusing to pass the butter, concentrating fiercely on their cards and trying to read in human faces who among them might win the hand.

My father had retired early after having left near the table an alarm clock set at twelve PM, at the ringing of which everyone at table would be expected to go poof, like Cinderella at the stroke of midnight. The festivities usually concluded at one or two.

It was Friday the 20th, and Christmas Day was twinkling in all eyes. The kitchen was suffused with the odors of Christmas: traditional turkey with all the fixings, stuffing, cranberries, gravy the color of my father’s Sunday shoes, potatoes and turnips, greens and salad, wine red and white, fresh bread from the Italian bakery in Agawam or Hartford, Ann Bollea’s apple and mince pies. The small living room was bursting with laughter and conversations whispered and shouted. Such family gatherings were not rare, and everyone was there gathered around the table, elbow to elbow, but for the children, who were settled in the kitchen where we usually took our supper.

The turkey arrived, hefted by my father, who had left his alarm clock in his bedroom. When everyone had their fill, my mother, who had been watching the proceedings with the attention of a master sergeant, asked this or that feaster why they had not had seconds or, in the case of the gluttons, thirds.

Nothing was ever wrong. Everything was always right.

My mother’s earlier injunction, “Now, there will be no talk of politics or religion at this table, at this time,” was generally widely disregarded.

Dwight Eisenhower had ascended to the presidency in 1953 and held that office until 1961. Pasting “I Like Ike” political posters over the bridge near Stony Brook was my introduction to politics. I believe my father had the first framed picture of Barry Goldwater in Connecticut. Barry and I shared a bedroom together, most likely because my mother – who grievously disappointed my father by voting for Senator Jack Kennedy over Richard Nixon for president in 1960 – didn’t want a stranger glaring down on her in her bedroom. My father was a Republican in a town that was blanketed with Democrats, and these included many of my uncles, as well as Buzzy Bollea, my brother’s father-in-law. Quicksand, my mother knew, was everywhere. But the family managed to get along despite sharp political differences. Buzzy was a molecular Democrat, my father a molecular Republican, yet they were lifelong friends who admired each other for the best of reasons.

On the religious front, there were no atheists in the town and few publicly professed agnostics. My father and mother sent their children to St. Mary’s parochial school within shouting distance of our house. The Sisters of Saint Joseph were the teaching order that pulled us from first to eighth grade. My grandfather’s depreciation of the nuns was legendary. Whenever he saw a cluster of them proceeding from the school down Center Street during their frequent peregrinations, he would dive for cover into his house. But he was a man in whose brain superstition wrestled with rationality. One of those sisters taught me how to draw, and I will be forever grateful for her attentions.

Following the Christmas meal, the women floated into the kitchen, the table was cleaned, and the men, loosening their belts, retired to the living room to continue their confabulations. Someone was sure to fall asleep. Turkey has that effect on people. Somewhere around 11:00, nearly all the relatives departed to their own homes under a starless, cold, December sky.  In the bedroom, the alarm clock would go off. Another Christmas had been tucked into bed.

In the morning, Mrs. Bianchi’s cock would crow and set off a riff of barking from Mr. Curtie’s old, nearly hairless, blond colored mutt.