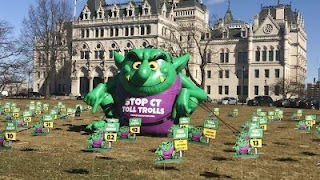 Like a quiescent vampire snoozing by night in his coffin, the prospect of tolls, which the No Tolls CT group thought it had slain, is now showing signs of new life. This may be Governor Ned Lamont’s third or fourth – one loses count – toll proposal iteration. According to a story in a Hartford paper, Lamont is proposing tolls only on bridges “as low as 40 to 80 cents under revised plan.”

What a bargain, as compared with his previous proposals. Lamont, during his campaign for governor, first proposed a trucks only toll on numerous gantries – one loses count. The No Tolls CT movement -- perhaps the first real populist, in the sense of popular, movement in Connecticut since the much abused Tea Party movement a decade past – pretty much slayed the toll dragon after Lamont, now elected governor, expanded his proposal to include pretty much anyone in the state traveling on  a major highway. The Tea Party movement was more or less buried under an avalanche of spending and corresponding increases in taxes.


Speaker of the state House of Representative, union employee Joe Aresimowicz, candidly admits that the roll-out of Lamont’s ill-conceived plan was somewhat defective. But Lamont has grown in office: “I like the way the governor is doing it this way,” said Aresimowicz. “When you don’t come in with a plan fully fleshed out to where it’s like ‘this is what I want, now give it to me,’ I think there’s more room for consensus building and agreement and a higher likelihood that it gets passed. Although some may be frustrated by the lack of detail, the lack of detail to me shows a willingness to compromise and work together. ... It’s a slow roll-out, but it’s done in a way to where it will allow us to add to the process.”

Either Aresimowitz here misspoke, or a gremlin had taken possession of the reporter’s keyboard. Aresimowitz meant to say, “When you DO come in with a plan…” blah, blah, blah.

Let’s pause over some of the blahs. When a plan favoring tolls has been fully fleshed out, there is “more room for consensus building.” Aresimowitz here is referring to consensus among Democrats, not Republicans, whom both he and President Pro Tem of the Senate Martin Looney have cut out of “consensus building” on such crucial matters as budgets for the last 9 years or so – one loses count. Having achieved consensus among Democrats in the General Assembly, it goes without saying that bills favoring Democrats in the General Assembly are more likely to pass. And dominant Democrats almost to a man, or woman, favor tolls.

Why do they favor tolls?

Democrats need a new revenue stream – tolls are to Lamont what the income tax was to former Maverick Governor Lowell Weicker – because the old revenue streams have been depleted by increases in spending.  And any toll, anywhere in Connecticut, any time, any place, represents the camel’s nose in the state’s increasingly large spending tent. The income tax, Weicker’s gift that kept giving to Democrats, always loathed to disappoint their special interest groups – largely state employees unions, a campaign petard that has blasted many a Democrat into office – has been diminished, as have other revenue streams, through seemingly unending recessions, caused in part by excessive regulation and tax creep, business flight, and the exodus from the state of entrepreneurial capital and market creativity.

Ominously, Aresimowitz adds, giving the game away, “It’s a slow roll-out, but it’s done in a way to where it will allow us to add to the process.”

Republican minority leader in the House Themis Klarides has a pretty good idea what, in the future, will be added to the process. Indeed, Democrats had shown their hand long ago.

Unintentionally borrowing a sentiment from former President Ronald Reagan -- nothing is so permanent as a temporary tax – Klarides said, “We all know the toll is never going away. Logistically, it’s not going to happen. The state of Connecticut has never found a revenue stream that they ever gave back. Look at the income tax. Look at the hospital taxes… We still feel the same way about tolls that we felt all year long. We do not believe that tolls are a way to fund transportation in this state ... You cannot tell people that the roads and bridges are falling apart, and the only way to fix them is to take more money out of your pocket in tolls — a toll that will never be taken away.”

The lady is right. But so too was Cassandra, the Greek prophetess who spoke the truth and was never heeded by powerful rulers who understood that power always trumps truth.