The Conscience Of A Progressive 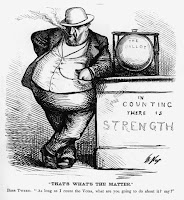 One publication noted that the primary defeats of the three incumbent Democratic mayors indicated a “hunger for change” in cities long dominated by the Democratic Party. Three questions arise: What changes are in the minds of Democratic voters who turned a frozen face to incumbents? To what extent is change possible within cities dominated for decades by a single party? And why has the hunger for change not moved more voters towards the Republican Party?

The answer to the last question should be obvious: There is no serious and permanent Republican Party presence in large Connecticut cities. So small has the Republican Party footprint been in the three cities mentioned above that, it has been acknowledged by both major parties, Democratic primary elections in large urban areas determine victors in General Elections.

Mr. Finch has taken the precaution of allying himself with an all-purpose third party and may challenge Mr. Ganim in a General Election. However, the still intact Democratic Party machine in large cities gives Democratic Party endorsed candidates a leg-up over their competitors. Mr. Segarra is not likely to challenge Mr. Bronin in the upcoming General Election. Mr. Bronin had been blessed with a friendly nod from Mr. Malloy, the nominal head of the Democratic Party in Connecticut, during the primary and a fulsome endorsement after the primary.


Along with U.S. Senators Dick Blumenthal and Chris Murphy, Mr. Malloy endorsed Mr. Finch before the Bridgeport primary. At the same time, Mr. Malloy signaled his disapproval of Mr. Ganim, without announcing he would support Mr. Fitch over Mr. Ganim in any possible third party challenge. Following the primary returns in Bridgeport, Mr. Malloy, according to a piece in CTMirror, hedged in his response to Mr. Ganim’s victory. Was he willing to embrace Mr. Ganim, or would he support a challenge from Mr. Fitch?

“I’m not doing anything on that race today. I have to have some conversations and take a look at it,” said Mr. Malloy, “tersely acknowledging that Mr. Ganim’s return as mayor of Connecticut’s largest city would be awkward.”

Awkward indeed: Mr. Ganim, convicted of bribery, had spent seven years in prison before he audaciously sought to recover the position from which he was expelled. And his endeavor will likely be successful. In a one-party Democratic town, a primary win assures election. After the Great Fire at Windsor Castle, the oldest and largest inhabited castle in the world, the Queen was asked what she thought of the fire. “Awkward,” she said.

“Obviously,” Mr. Malloy added, “the situation is an unusual one by national standards,” but not, presumably, by the operative standards in Connecticut’s larger cities, many of which have been run by the state’s dominant Democratic Party for decades.

A report by WNPR noted: “Bronin raised over $800,000”, about twice as much as Mr. Segarra, “which allowed him, among other things, to advertise heavily on television and to send out an impressive number of political mailers. (Some recent ones included images of and praise from Governor Dannel Malloy, who campaign aides say hadn't approved their use.)”

This disclaimer – that Mr. Bronin’s former boss had not approved the subtle gubernatorial endorsements included in the mailers – follows hard on the heels of a suit brought against Mr. Malloy by the State Republican Party that claims the governor made use in his own campaign of mailers that may have run afoul of Connecticut’s stringent campaign finance laws.

Bridgeport, labeled by Ken Dixon of the Connecticut Post, formerly the Bridgeport Post, "a seething mass of patronage," presents Mr. Malloy, the Queen mother of the Democratic Party in Connecticut, with a taxing problem. Should the author of the state’s “second chance” society torpedo Mr. Ganim’s march to the mayoralty perhaps, as columnist and Managing Editor of the Journal Inquirer Chris Powell has suggested, by threatening to turn off the patronage tap in Bridgeport? Or should Mr. Malloy simply bow to the fait accompli Mr. Ganim has managed to engineer and count himself lucky that the Republican Party is so weak and inconsequential in Democratic cities that, taken together, have assured both Mr. Malloy's election and re-election to office?

Either way, Mr. Malloy wins. But one can see in Mr. Malloy’s furrowed brow his political conscience tousling furiously with his political opportunities. Tammany Hall boss George Washington Plunkitt, tortured by such tugs and pulls of conscience, most often yielded to his opportunistic good angel: “I seen my opportunities, and I took’em.”