Senator Chris Murphy And The Enemies Of The Good 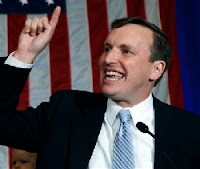 By redefining a treaty – a major foreign policy agreement among more than one nation – as a “deal” President Barack Obama spared himself the necessity of acquiring a majority of Congressional votes to affirm the non-treaty. His redefinition presses a finger down on one of the scales of justice. A treaty would have required a two-thirds vote of approval from the U.S. Congress. Mr. Obama’s initial plan, it may be recalled, was to treat the Obama/Kerry/Khamenei deal as a simple agreement that required NO Congressional approval at all.  The present arrangement serves much the same purpose: It lowers the approval bar and creates the illusion of majority assent on what is, for all practical purposes, a treaty that, for political reasons, has been redefined to secure Congressional affirmation.

Congressional Democrats who have approved the deal now own the non-treaty.  Their approval will call forth  real-world consequences that may not appear on the public stage until Mr. Obama – but certainly not the triumphant Mr. Khamenei – has left his Presidential position to further shape and manipulate his legacy.

On September 2, Barbara Mikulski a Maryland Democrat became the 34th U.S. Senator to pledgesupport for the non-treaty, thus providing Mr. Obama with enough votes to sustain a presidential veto of an expected Congressional rejection of the deal. After three decades in the Congress, Ms. Mikulski, lame-ducking herself, has decided to ring the curtain down on her own legacy.

The members of Connecticut’s all Democratic U.S. Congressional delegation pledged to support the deal BEFORE a tally showed it would pass – with one major exception: Senator Dick Blumenthal, a reformed Jew, could not summon the political courage to vote for or against the measure until he was certain the non-treaty would pass muster in the Congress, which is on a par with joining a battle after it has been won.

A statement released by U.S. Senator Chris Murphy in August typified the generic Democratic response to the Obama/Kerry/Khamenei deal.

Mr. Murphy acknowledged the deal was “not perfect.” A more perfect deal, in his view, would have given Western signatories unrestricted access to all military sites in Iran; a side agreement between Iran and UN inspectors, whose business it is to verify compliance with the agreement, permits only Iranians to supply information on questionable military sites, which is, to beat an old maxim to death, on a par with allowing foxes to report raids on the hen house to concerned coyotes.

Though imperfect, Mr. Murphy insisted in his August statement, “the perfect must not become the enemy of the good,” an even hoarier maxim sometimes ostentatiously displayed whenever a politician wishes to justify a ruinous policy. Israel Prime Minister Benjamin Netanyahu got it mostly right when he told the U.S. Congress way back in March that the Obama/Kerry/Khamenei deal was a bad one. And bad deals, as Mr. Murphy well knows, cannot by cheap rhetorical flourishes be made good; or to put it another way – the imperfectible ALWAYS is the enemy of the good.

“Because I believe,” Mr. Murphy announced in an August manifesto, “that Iran is less likely to get a nuclear weapon with this agreement than without it, I will support it.” Mr. Murphy worried that in the absence of the imperfect agreement, “war in the Middle East would be the only remaining viable option.”

The “deal or war” proposition, a false alternative, is itself cratered with imperfections that very well may become in the not too distant future the enemy of the good.

The deal does NOT prevent Iran, which has hegemonic ambitions in the Middle East, from acquiring a nuclear capacity, and it assumes an honorability among virulent anti-American Iranian leaders that is nowhere in evidence. Indeed, in its relations with the non-Islamic West, the holy Koran authorizes the followers of Islam to lie boldly, if by doing so the enemies of Islam (Kafir) may be thwarted. Such purposeful deception is something on the order of a religious commandment. Those who believe that commerce with the West would mitigate Iranian behavior have not yet read the Ayatollah Khamenei’s newest book, “Palestine,” which rededicates Iran to the destruction of Israel, nor have they drawn profitable lessons from the so-called Arab Spring.

Even assuming that leaders in Iran would honorably bind themselves to terms proposed by the agents of the Great Satan, the Obama/Kerry/Khamenei deal allows Iran to acquire a nuclear capacity in ten years, at which point, the prospect of war once again will rear its ugly head. But of course, post deal, the negotiating landscape will have radically changed – and not for the better. Over time, the enemies of the good will become more sinister and hideously strong. The deal, those who oppose it say, makes matters worse – because, after ten years, Koranic leaders in Iran will be richer, more powerful and better able to push into the sea the only democratic state in the Middle East, beleaguered Israel.

The deal opens the spigot on previously sequestered cash, billions of dollars that can be used by a reinvigorated Iran to consolidate military victories waged by Iran’s proxies in the Middle East. Saudi Arabia, which now finds itself encircled by a crescent of pro-Iranian proxy forces, has now turned to Putin’s Russia in an attempt to buy nuclear security. And indeed, nuclear weapons are available for cash on the barrel from other enemies of the United States. North Korea comes to mind. Here is a question that ought to be put to proponents of the non-treaty: If Iran or Saudi Arabia or Syria were to purchase a nuclear capacity from some willing nuclear-tipped state – China, Russia, Pakistan, North Korea or Israel -- how would proponents of the Obama/Kerry/Khamenei non-treaty thwart the acquisition in the absence of a trade embargo that has been permanently destroyed?

Mr. Murphy’s formulation – “war or the deal” – supposes that strategic capabilities in the Middle East will remain static once the non-treaty is affirmed. That supposition is shaping up to be a deadly error.