The Infrastructure Investment Fraud, the E-Cert Budget And Unitary-Tax Whipped Titans Of Industry 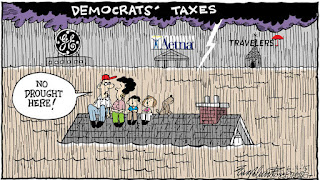 Some commentators, "Morning Joe" among them, may have missed the snarling irony of the moment. Governor Dannel Malloy, a frequent guest on "Morning Joe," will soon approve the Democratic Party budget, the most progressive budget in state history and Connecticut’s second most expensive budget in state history. Mr. Malloy’s first budget, launched at a time when his state was caught in the toils of a malingering recession, was a tad more expensive. In passing, one may note that Connecticut, unlike all the other states in the union, still has not recovered the jobs lost in the crippling Bush/Obama recession. Is it not possible that businesses in and outside the state are reacting to Connecticut’s counterproductive progressive economic policies? Three of the state’s largest job providers – Travelers, Aetna and General Electric – seem to think so.


The current budget provides “$436 million in sales tax receipts over the next two years to stabilize transportation finances and back a major infrastructure overhaul,” according to a story in CTMirror incongruously titled “Proposed state budget diverts most new transportation dollars.” The much neglected story was filed two days before the Malloy-Sharkey-Looney budget was finally passed in an Emergency Certification (E-Cert) measure.

The government of Connecticut is authorized by statute to bypass during emergencies the usual legislative process. The familiar process involves such unavoidable detours as public hearings, the presentation of bills to legislators called upon to vote for or against them, and a certain amount of leisure to consider legislation and offer amendments; in short, what we were once taught to call in civic high school classes – when there were such rigorous offerings in high school – the rudiments of democratic government. These democratic formalities are important, most members of the Democratic Party would heartily agree; after all, a budget is not exclusively the product of an executive department, as would be the case in a more expeditious tyranny. Democracy may be messy and plodding, but generally we prefer it to more efficient means of governing such as fascism – Mussolini did, after all, make the trains run on time – or an autocratic system such as the Iranians enjoy, or one-party state enterprises such as are found in communist China or Cuba.

The term “emergency” calls to mind the kinds of floods now rampaging through Texas. That is the kind of emergency Connecticut legislators imagined when they wrote the E-Cert bill; floods, destructive snow storms, brimstone blasts from an angry Republican God. A budget that fails to pass the legislature by a set date does not qualify as an “emergency’ by any stretch of the word, especially since budget sessions are easily extended beyond their past-due dates.

So then, why did Democrats – who have dominated the state legislature since 1965 – package the budget as an E-Cert bill?  One does not expect "Morning Joe" to dwell long on such perplexities. But the answer to the question is simple: Democrats in the General Assembly did not want hearings or debates from the party of opposition. They wanted to marginalize their political opponents, and they had the political heft to do it. During his first budget, democrat (note the small “d”) Dannel Malloy shut Republicans – who represent a little less than half than of the voting public – out of the budget process. The autocratic Democrat now has repeated his performance of 2011. The one-party state, when it has seized power, lusts after efficiency – not democracy.

It wants to make trains run on time. It wants to repair Connecticut crumbling infrastructure. Autocrats in a real democracy would be thrown out on their ears for having a) convinced the general public that a thirty year, $100 billion expenditure on infrastructure repair is necessary to the future prosperity of the state, b) pressed Democrats in the legislature to provide funding for the project… and then… then… as the CTMirror story notes:

“While the tentative state budget deal technically dedicates $436 million in sales tax receipts over the next two years to stabilize transportation finances and back a major infrastructure overhaul, that same spending plan effectively diverts more than 85 percent of those funds for non-transportation programs.

“At the same time the receipts are assigned to transportation, another $371 million in general fund resources normally earmarked for transportation would stay in the general fund — which is facing big deficits in the coming biennium.”

Shall we pause over these delicious paragraphs and consider:

Following the passage of the Democratic Party budget -- which was hustled through the Democrat dominated General Assembly at the close of a legislative session in an E-Cert bill that brooked no debate, no amendments, no careful deliberation – Mr. Malloy will sign a measure that diverts to the general fund more than 85 percent of monies that were to be put into an untouchable lock box for Mr. Malloy’s bread and circus infrastructure repair program. And an addition $371 million earmarked for the same purpose will remain in the progressive Democratic Party’s slush fund, where most lockbox dedicated funds end up to patch holes in budgets created by destitute General Assembly  Democrats.

Is that not a delicious piece of political knavery? The fraud is glaringly immense. Surely, even Mika Brzezinski, co-host of MSNBC's "Morning Joe" and once a toiler in the journalistic vineyards of Connecticut, can appreciate political skullduggery on so grand a scale.

And yet, the Morning Joe commentary wants fire and brimstone. It is too flacid, too dull; it does a grave disservice to brazen fraud:

We shall have to be satisfied with the above snarling Bob Englehart cartoon.

However, it will not be long before Mr.  Englehart’s snarls turn to smooches. One expects that even Connecticut’s unitary-tax whipped  Big Three – Travelers, Aetna and General Electric – their eyes fixed on the exit signs, will make necessary accommodations -- without reducing their campaign contributions to the progressive Democrats in Connecticut’s  executive, judicial and legislative three ring circus.

Once again we see the northeastern mindset at work. No one or no businessman could possibly want to relocate out of the area. As a native Midwesterner and frequent traveler to the rest of the USA, perhaps this is more obvious. New England is shrinking to affluent areas around Boston with the rest loosing business. With GE merging with Alstom and getting out of most finance it is a perfect time to move its headquarters. Most of it's factories are in the Midwest and south with major facilities in Cincinnati (jet engines) and Atlanta (Power Plants). They are gone. The insurance types have been moving jobs out of state for years to lower cost areas. The argument was always that the critical mass of insurance expertise was in the state but this is getting less critical. Stamford has no reason to exist anymore as a tax shelter for banks and finance. I regret it but New England is about to go through the local equivalent of the Midwest rust belt times. The new industries the politicians crow about like biotech and automation depend heavily on R&D tax credits and a favorable corporate tax environment. The Progressives in charge will dry that up in a second. Notice that the only biotech new operation in CT is a non-profit Jackson labs.

Stand far enough back and there is little reason to locate or remain. The current budget and tax bills aren't the final straw but are the final proof that things will not get better for business.