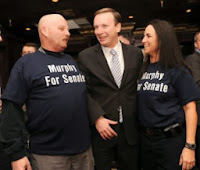 The FBI’s singing canary in the Donovan probe, “labor activist” Ray Soucy, was not given prison time for the part he had played in the attempted corruption of former Speaker of the State House Chris Donovan.

The lede on a story in a Hartford paper ran as follows:

“A labor activist at the center of an attempt two years ago to kill a tax on tobacco by bribing a top state lawmaker with tens of thousands of dollars in illegal campaign money was sentenced Monday to three years probation, the first six months to be served at a halfway house.”

Connecticut’s majority Democratic Party is full of “labor activists.” It’s only a slight stretch to say Governor Dannel Malloy, who has marched on the picket line with union workers, is himself a “labor activist.” Mr. Malloy pledged his troth to unions when he was in the political nursery, and he has renewed his vows several times during his administration, most notably when his first budget was on the drawing boards.

However, few labor activists are as colorful as Mr. Soucy, Connecticut’s equivalent of George Washington Plunkitt, a Tammany Hall boss in New York City who ran his political operation from a bootblack stand. Mr. Plunkitt – “I seen my opportunities, and I took’em”  – was on his way out even before he was interviewed several times by reporter William Riordan, who later stitched together his embarrassingly frank interviews in a small book, “Plunkitt of Tammany Hall.”  Mr. Plunkitt claimed he was a casualty of the then new civil service system, the bane and ruination of political parties. Mr. Plunkitt’s Democratic Party, it may be noticed, has since adapted to the new reality and now counts unions and civil service workers as the I-joist of the Democratic Party.

The FBI wired Mr.  Soucy and provided him with a script with which he might ensnare the people – some young, others inexperienced in the ways of political lifers -- who surrounded Speaker of the State House Chris Donovan, then running for a U.S. Congressional seat left vacant by Chris Murphy, now a U.S. Senator.  The rancid odor issuing from the FBI sting operation persuaded Mr. Donovan to withdraw his Congressional bid in favor of Democrat Elizabeth Esty. The small-fry were easily ensnared. At some point during the FBI sting operation, the cover was blown – when and by whom we may never know – and most of the incumbent big fish, with some effort, swam upstream.

Hauling in the net, the Feds successfully prosecuted Mr. Donovan’s campaign manager, lower level campaign workers, and some benighted smoke shop owners drawn into the sting by George Washington Plunkitt Soucy, who teased fraudulent campaign donations from them by explaining that money made the wheels go round at the state Capitol. Or, as Mr. Soucy colorfully put it, “Politics is about the Benjamins. [Ben Franklin’s mug is on the highly inflated hundred dollar bill] This game runs on one thing -- dollars."

"Chris Murphy will do anything in the (expletive deleted) world for me because he remembers that I was the first one to believe in and invest in him. That's how the system works."

After Mr. Soucy tells a wired FBI informant, Patrick Castagna, that he has been sowing the political ground in $10,000 increments, Mr. Castagna, the FBI straight man, doubts whether $10,000 is sufficient to buy a Connecticut politician. Inflation, after all, has taken a bite out of the purchasing power of the dollar.

Says Soucy, “The $10,000 was to let him know you are serious....We're dealing with politicians. We're not dealing with the mob [pause]. It's a close second."

“Pictures [the Benjamins again] they're worth a thousand words. The guy running in the 5th District [former House Speaker Chris Donovan] he got 10 pictures [a $10,000 campaign contribution].”

When all the dirt was flushed down the drain, “the guy running in the 5th District” gave up his campaign, and the FBI, thanks to the wired Soucy, managed to send a few Donovan subalterns to prison. But not Soucy the singing canary. The well connected union leader, now on probation, will spend six months in a half-way house because, according to one report,
“Soucy [sic] recordings and his help in raising and delivering about $28,000 in cash were instrumental in the indictments of two Donovan campaign officers and five roll-your-own owners or employees.”

The guys who got the Benjamins were inconvenienced but emerged unscathed from the FBI sting.

Mr. Plunkitt tells us why:

“Understand, I ain’t defendin‘ politicians of today who steal. The politician who steals is worse than a thief. He is a fool. With the grand opportunities all around for the man with a political pull, there’s no excuse for stealin’ a cent. The point I want to make is that if there is some stealin‘ in politics, it don’t mean that the politicians of 1905 are, as a class, worse than them of 1835. It just means that the old-timers had nothin’ to steal, while the politicians now are surrounded by all kinds of temptations and some of them naturally—the fool ones—buck up against the penal code.”