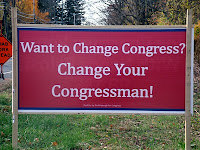 There have been very few unexpected endorsements from Connecticut’s media, and the almost universal endorsements of Attorney General Richard Blumenthal by the state’s opinion makers were entirely predictable. The status quo media likes status quo candidates.

The status quo candidate will always stress his experience over that of his opponent who, of course, may have little direct experience in politics. Such was the case with Ann Brickley, the Republican candidate for the U.S. Senate running against Sen. John Larson, a Beltway familiar. The proposition that voters should choose experience in office over inexperience is, of course, fatal to good government. The very existence of an election process argues against cradle to grave politicians. But the settled opinion among many editorial writers in the state is that political experience should be determinative.

For this reason it was a little unsettling, in a positive sense, to read the Register Citizen’s endorsement of Brickley over Larson. The paper reasoned that Mr. Larson had been swallowed up by the Washington whale. His attention, which should have been directed toward his failing state, the paper argued, had been too often directed towards Beltway status.

“We are in the midst of a huge national backlash against Pelosi’s management of taxing and spending policies that affect the economy,” the paper said, “and against the federal health care reform bill that Pelosi and Larson shepherded through Congress… We feel she [Brickley] would bring the 1st District seat back around to being about Connecticut’s interests, after years of having a congressman who long ago got caught up as a key lieutenant in an inside-the-Beltway partisan war that has very little to do with what is good for Torrington, Winsted, New Hartford and our state.”

The paper also noted that Brickley has devoted her efforts in private enterprise to helping companies become more prosperous, not a bad resume line at a time when many Connecticut companies have for years been moving to greener pastures elsewhere. Endorsements of this kind, however, are the exception to the rule.

Mr. Blumenthal has no direct experience as a U.S. Senator, but he has had considerable practice in stroking the media, which had not looked closely at some of the cases he prosecuted in Connecticut. Mr. Blumenthal has been taken mostly at his word, as reflected in those ubiquitous press releases that, for 20 years, have rained down on Connecticut’s media like confetti at a wedding. The indespensible critical attitude one expects in a healthy adversarial media never showed up at the wedding. Many people suspect this is the case because Mr. Blumenthal’s world view, iterated endlessly in his ideologically partisan press releases, dovetails with that of Connecticut’s left of center media.

Mr. Blumenthal’s harrying of businesses, sometimes justified, has been a boon to unions and editorial writers advocating left of center views. It simply is not true that Mr. Blumenthal has directed the bulk of his fire at Big Business. It is not true that his office is capable of representing adequately both the interests of state agencies -- a statutory requirement he labors under, except in those cases in which he declines to do so for ideological reasons – AND the interests of whistleblowers employed in the agencies he is charged with representing. The Dickman case throws this discordant representation into bold relief, a point that should have been an issue in Mr. Blumenthal’s senatorial campaign. It wasn’t.

Throughout his campaign, Mr. Blumenthal continued to pelt the media with attorney general releases touting his own moral rectitude. In one of those releases, he advised that he would continue to harry an ADVERTISER – unless the advertiser withdrew from its site notices that might have been placed by prostitutes disguised as masseuses, an obvious First Amendment issue Mr. Blumenthal was successful in forcing the California company to adjust its advertising in such a way that it would become more difficult for police to monitor prostitution activity. Significantly, Mr. Blumenthal reached all the way to California in his effort, leaving similar Connecticut advertisers free to ply their ads unmolested.

The suppression of First Amendment rights by an attorney general not authorized by statute to engage in criminal cases should have alarmed the state’s media, if only because all media has a dog in every First Amendment legal tousle. It didn’t. And Mr. Blumenthal’s assault on the First Amendment succeeded, in large part, because Connecticut’s timid pro-Blumenthal media was unwilling to defend an issue that had been a tar baby since the days of Chautauqua and Temperance societies.

Mr. Blumenthal carefully chooses his targets to comport with liberal orthodoxy. His attorney’s general media releases, far more numerous over a 20 year period than his competitor’s campaign ad brochures, were sent out while Mr. Blumenthal was running for the U.S. Senate. Indeed, his role as attorney general was, oddly, the central pillar of his senatorial campaign. Mr. Blumenthal had chosen his marks well. His successor, possibly George Jepsen, the preferred candidate of the state’s media, will not be able to resist the temptation to follow in his predecessors footsteps. Jepsen, politically and emotionally attached to unions and the traditional Democratic Party agenda, has said he would do so, though in a lower key. The attorney general office will be impervious to media criticism that never arrives at its doorstep.

And the absence of such criticism certainly was no bar to media endorsements of Mr. Blumenthal.