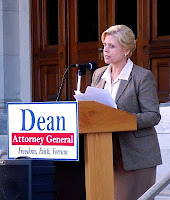 Attorney Martha Dean, running for attorney general on the Republican ticket this year, realizes that the office is not, and cannot be, an island unto itself.

Unlike Attorney General Richard Blumenthal, against whom she ran and lost in 2003, Dean feels that the attorney general operation has evolved into a shapeless island unto itself whose punitive litigation deeply affects the mainland.

During a recent televised debate with Blumenthal, Merrick Alpert – a Democrat who apparently has been banned from speaking to some town committees from fear that his message will damage Blumenthal’s prospects – pointedly asked Blumenthal “How many jobs have your suits created?” to which Blumenthal responded, “Our law suits, our legal actions, actually create jobs, because businesses actually welcome competition and a level playing field.”

A request from the judicial department detailing companies sued by Blumenthal during the past four years produced a list containing 900 entries of corporations in which the plaintiff has had an AG appearance. Companies on the list that had more than one AG appearance appeared more than once under different court docket numbers. But the list does put a rather dramatic number to the legal actions that Blumenthal thinks were responsible for creating jobs in Connecticut.

Pointing to Connecticut’s leadership crisis, Dean remarked in her opening campaign announcement: “Here in Connecticut, there is little leadership at the top. While the Secretary of State uses our money to compile “the list” of the personal features and proclivities of all who deal with her office, the legislative majority renders the Governor impotent – forcing her to try to deal with the crisis alone, all while the Attorney General continues to bully, grandstand against, and intimidate law-abiding businesses in Connecticut to the point where they, in many cases, give up and close down or depart…”

Secretary of state Susan Bysiewicz is running for attorney general on the Democratic ticket.

“There is no delicate way to say that the so-called 'leadership' in the current legislative majority is directly to blame for Connecticut’s economic predicament,” Dean said.

And, firing a shot over the bow of the Democratic majority in the legislature, she emphasized that in the absence of “a fundamental change in the legislative majority, the new Governor – of either party – will be unable to bring about the critical changes needed immediately in this State. The majority in charge of the legislature must be voted out now…”

It is obvious from Dean’s remarks that she had given a great deal of thought to what makes a society prosperous. Governments may facilitate prosperity; they cannot create it through impediments to prosperity:

“To succeed and become prosperous, a society must provide a meaningful opportunity for individuals to create, own, grow, and personally reap the financial rewards of their successful business enterprises free from undue government interference. Without this promise, and its reality as enforced by law, the best and brightest --those who know how to create wealth through successful enterprises – will not choose to locate or remain here…

“Such an opportunity depends on freedom and predictability – the exact opposite of the unwieldy, burdensome, complex, political and irrational business environment that exists today in this state.”

Freedom is one of the pillars of Deans campaign, and she defines freedom as “Freedom from improper, or excessive, or unnecessary government interference with our Constitutionally-guaranteed rights. I will protect property rights, economic liberties, and the rights guarantee under the U.S. Constitution, including under the First Amendment, Second Amendment, and Tenth Amendment, among all the other.”

An indispensable condition of a free and limited government, the The U.S. and state constitutions set the limits of government intrusion into private and corporate life. As attorney general, Dean would make it her first duty to “oppose all efforts to diminish or interfere with the Constitutional rights of Connecticut’s citizens,” as well as vigorously opposing “excessive, improper or unnecessary government mandates and regulations that burden business without proper constitutional justification.”

She would strive to make law enforcement fair and just, while insuring compliance with the law: “…no more politicized lawsuits or grandstanding against companies.” Rather than resorting to “gotcha law suits,” she would “focus on prevention of unintentional unlawful conduct through education.”

And in a stinging rebuke to Blumenthal in particular, she would “end the current Attorney General’s so-called ‘moneymaking’ function for the AG’s office. An Attorney General’s office should never be under pressure to sue and hold-up companies or use extortion to generate a so-called ‘revenue stream’ for a State. This is the behavior of a bank robber – ‘your money or your life’ – and it must end.”

Dean would cut costs and abuses in one of Connecticut’s most insular agency by reducing the number of lawyers in the attorney’s general office: “Just as corporations do, I will look into expanding the use of outside counsel, negotiating new contracts with them yearly to reflect changing market conditions.”

Dean’s is a big reform plate, and she’s put a lot on it. But the reforms she suggests are both salubrious and necessary.

Anonymous said…
How many millions has blumey cost the utilities,CL&P NU AT&T etc, with his blathering and challenges which in the long run have no benefit fot the users. We all pay for these millions in the rates eventually.
3:47 PM

Ned Kelly said…
Blumenthal ruined this state with his litigation first approach to small, medium and large businesses alike. If you have to litigate against a business to make them stay in the state there is something sadly wrong with the CT business environment. Susan Bysiewicz is just another Blumenthal. Martha Dean is the only candidate for AG that truly believes in reducing the size of Government, removing unfair and business choking regulations, reducing taxes to entice investment back into this great state and to allow people to live work and play, free from unwarranted Government interference. Go to You tube and view her AG Speech, to the Dan Lovallo radio show and listen to her interview. She is the real deal. Martha Dean for Attorney General on Facebook is where you will see the vision for Connecticut’s future. She is a breath of fresh air. Ned
1:39 PM