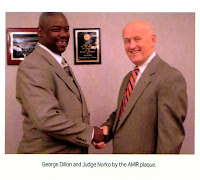 Anyone who has ever gotten himself in trouble -- many of us from the age of 12 to 20, though perhaps not in trouble criminally -- knows that there comes a point in a richly deserved punishment when the agony, despair, and humiliation trails off into a healing repentance. Many of the great novelists -- Fyodor Dostoyevsky in “Crime and Punishment,” Dickens in “Great Expectations,” Victor Hugo in “Les Miserable” -- have written persuasively about that spiritual pivot point.

Much more than most of us, Hartford Community Court Judge Raymond Norko has seen men swing, as from a hangman’s noose, between punishment and rehabilitation. The lower depths pass before him daily. That parade is a dispiriting experience, particularly when the level of criminal activity is such as to allow a restorative punishment that may -- just may -- set the foot of a potential hardened criminal on the road to a life in which crime plays no part. One of the great failings of jurisprudence in our time is that the options in the retributive toolbox of judges do not, in many cases, permit judges to be prudent in assigning punishment, and jurisprudence always should involve prudent punishment.

Judge Norko thinks the opportunity for rehabilitation ought to occur somewhere in the punishment process, the sooner the better. And he is determined to place in the toolbox of judges and law enforcement officials appropriate alternative punishments that have been shown to aid in the process.

The Hartford Community Court is Judge Norko’s brainchild. In theory, the community court springs from Rudy Giuliani’s golden perception that if communities did not tolerate minor crimes, they later would not be prey to a plague of big-time lawbreakers: If you permit a broken window to stand in a community, you are simply inviting crime. The perception is a frank avowal that major crimes such as murder, rape, assault, etc., are related to unattended offenses such as breach of peace, larceny, first-time marijuana charges, disorderly conduct, threatening, criminal trespass, and solicitation of prostitutes, as well municipal ordinance violations such as loitering, public nuisance, drinking, and excessive noise.

An ounce of prevention of criminal activity will always be worth more a pound of cure. There are more strings to Judge Norko’s instrument than is the case with other judges. The Hartford Community Court works hand in glove with police, bail commissioners, prosecutors, public defenders, social services, and court-supervised community service organizations. Community service is an important attribute of the court because it places the offender in his own community to work out his punishment. There is nothing like service in your own community to knock off the rough edges of an attitude. Community service also signals to the community itself that the court is serious in providing sanctions for quality-of-life crimes responsible for neighborhood deterioration.

In the summer of 2009 the Hartford Community Court handled a record caseload of 9,743. In the first half of the same year, Hartford police reported that Part 1 crimes (murder, rape, assault, etc) decreased 8.9% -- hard statistical evidence, Judge Norko says, “that if you go after low-level crimes it eliminates the permissive attitude of 'anything goes’ and makes it much less likely that violent and bigger crimes will occur. It’s the ‘broken windows’ theory brought to life.”

The statistics provided by the community court illustrate its connections with other agencies: In September the court recorded 1,275 arraignments. In the same time the court dispensed 2,562 hours of community service and made 278 social service referrals and 76 referrals to mediation. The suburban caseload was 11 percent and the appearance rate was an astonishing 89 percent.

Important though the figures may be for funding purposes, statistics are the poorest measure of what happens in this court. It is a transformative pivot that may turn, in the few cases I was privileged to witness, despair into the first flarings of hope.

A young man with dreadlocks, an erect bearing, and a frozen face stands before the judge, who has seen him before, the young man's mother to his left and his father, tall and slender as a reed, to his right. The young man has already completed his punishment and is now awaiting the final disposition of his case before Norko, who, as everyone in the court is aware, is no pushover. This judge is con-proof. The young man and the judge have finished their business together. The father’s head is still down, his hands clasped tightly together in front of him. Judge Norko calls the young man by his first name and he looks up.

“You love your father and mother?”

The young man smiles broadly, “Yes sir, I sure do.”

“That’s good, because they love you.”

The father, astonished, raises his head. Through a flickering smile he whispers a hasty “Thank you, judge” before all three leave the court.

The community court draws recourses from state agencies, the Social Service Department and the Department of Mental Health and Addiction Services, and private non-profit agencies. Community Partners in Action provides the community-service programs. Mediation services are provided by the Hartford Area Mediation Program (HAMP) under a contract authorized by statute. Adjudication staff positions include Judge Norko, the state’s attorney, the public defender, assistants, and others.

Judge Norko describes Dillon, who works with the community court each Wednesday accepting referrals and reporting to the court on their progress, as a “miracle worker” who “takes men in almost desperate situations and conditions and helps them achieve substantial progress toward their recovery.”

Last March the U.S. Department of Justice selected Hartford’s community court as one of three nationwide sites forming a Community Court Mentor Site Network. The court now serves as a model “to other jurisdictions seeking effective ways to combat such crimes as prostitution, public drinking and drug use, vandalism, and other low-level crimes that affect the quality of life in city neighborhoods.”

The community court is trying, as Norko puts it, “to put a foot in the revolving door by addressing the underlying issues that are often the root of a person’s involvement in the criminal-justice system. Accountability through community service and a helping hand through social services is the most productive manner I know of to deal with these low-level crimes.”

Owing to Judge Norko’s organizational and administrative skills, the Hartford Community Court, which also serves surrounding municipalities, runs in its daily activities like the proverbial well-oiled machine. The efficiency of the court is also due to the zealous involvement of Public Defender Liz Ahern, Assistant State's Attorney Kathleen Dwyer, the unfailingly cordial court interpreter, Jacqueline Torres, and Judge Norko’s indispensable administrator, Chris Pleasanton. The question hanging over the whole enterprise is: What will happen when Judge Norko retires in three years?

In this court in particular, justice and remediation depend on a comprehensive understanding of how the court deals with its indispensable secondary actors. The primary beneficiaries of the court are the lawbreakers the arc of whose life course will not be bent in a beneficial direction in the absence of this institution. But it is not often sufficiently appreciated that the communities in Harford and those huddled around it benefit greatly from the court’s daily activity.

The British author G. K. Chesterton wrote of the London district that then was ridden with seemingly intractable problems:

“Let us suppose we are confronted with a desperate thing -- say, Pimlico. If we think what is really best for Pimlico, we shall find the thread of thought leads to the throne of the mystic and the arbitrary. It is not enough for a man to disapprove of Pimlico; in that case he will merely cut his throat or move to Chelsea. Nor, certainly, is it enough for a man to approve of Pimlico; for then it will remain Pimlico, which would be awful.

“The only way out of it seems to be for somebody to love Pimlico: to love it with a transcendental tie and without any earthly reason. If there arose a man who loved Pimlico, then Pimlico would rise into ivory towers and golden pinnacles; Pimlico would attire herself as a woman does when she is loved. ...

“A mother does not give her child a blue bow because he is so ugly without it. A lover does not give a girl a necklace to hide her neck. If men loved Pimlico as mothers love children, arbitrarily, because it is theirs, Pimlico in a year or two might be fairer than Florence.”


There are some in Hartford who love the city with a seemingly irrational love, as women love their children -- because it is theirs. Among these are Judge Norko and those who work with him in the improbable task of making Hartford as fair as Florence.