The Bysiewicz Report: SustiNet, An Elixir for What Ails You 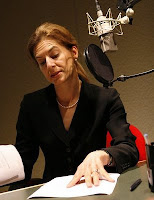 According to a brief piece in the Connecticut Post, the report indicates that business failures for the first half of 2009 are up 17%. About 7,000 businesses have closed down. In-migration of new business is also down by 9.6%.

The question is: Will these figures have any appreciable effect on Democratic plans to raise corporation taxes by 30% to meet a prospective deficit of $9 billion?

The decrease in business activity in the state, the most important and portentous datum released this year by the Secretary of State’s office, should be regarded as a fatal arrow in the heel of Connecticut’s wounded economy.

Mrs. Bysiewicz’s commentary piece, printed in the Danbury News Times. followed close on the heels of Gov. Jodi Rell’s veto of House Bill No. 6582, an Act Establishing the Connecticut Healthcare Partnership, and House Bill No. 6600, An Act Concerning the Establishment of the SustiNet Plan.

The consequences of Rell’s veto, Mrs. Bysiewicz wrote were plain for all to see: “A 2007 Report issued by the Health Insurance Policy Council showed that over 52 percent of the uninsured in Connecticut are employees of small businesses and their families. More startling, in the first half of this year, nearly 7,000 businesses in Connecticut have shut their doors, which represents a 17 percent increase in business closures over last year's figure and a new record high for first half of any year since we first started recording these numbers in 2000.”

SustiNet, Mrs. Bysiewicz advised in her column is “the catalyst to reviving our economy, growing companies, adding jobs, and retaining our highly skilled work force.”

Some people, not all of them Milton Friedman conservatives, think the most effective catalyst for reviving a moribund economy is a legislature devoted to cutting unnecessary spending and creating a welcoming climate for new startup businesses by reducing taxes and needless regulations. A 30% increase in corporation taxes would be very discouraging in this regard, a sign posted in neon over the state Capitol saying “No businesses need apply here.”

In a couple of years, Connecticut will have an opportunity to test Mrs. Bysiewicz novel theory that the 17 percent increase in the state’s business closures and its 9.6% loss in new business is attributable chiefly to inadequate and costly insurance coverage, because the Democratic majority in the legislature, by overriding Mrs. Rell’s veto of SustiNet, has just now taken a major step in putting the state on a path towards universal health care.

Programs similar to SustiNet in Massachusetts and Hawaii are seriously stressed because they have been found to be unusually expensive in a contracting market and have not proven to be the magical elixir promoted by Mrs. Bysiewicz in her eupeptic column.

Confronting a massive budget shortfall, Massachusetts lawmakers are cutting from their Commonwealth Care program roughly 30 thousand legal immigrants. The cuts are expected to save $130 million a year. Boston Medical Center, one of the city’s largest metropolitan hospitals, has filed a lawsuit against the state. The medical center claims Massachusetts is shortchanging it by $181 million annually because the state is not adequately covering the costs of Medicaid, Commonwealth Care and the uninsured. Reimbursement rates on the poor have dropped to 64 cents on the dollar.

Commonwealth Care was launched with much fanfare several years ago as a template for state and national universal health care systems. It is now – along with legal immigrants – hobbling towards an legislative emergency room.

The override of Rell SustiNet veto by Democrats who dominate the state legislature will set up a panel to craft outlines for the SustiNet universal health care system; recommendations for implementation are due in January 2011, and the prospective system will take effect in 2012 – plenty of time for second and third thoughts.

If Rell chooses to run on the Republican ticket for governor, Mrs. Bysiewicz will find herself campaigning against a seasoned politician who, perhaps with an eye on Massachusetts’ Commonwealth Care and Connecticut’s crushing $9 billion deficit, the highest per capita debt in the nation, has often enough said that in hard times imprudent spending must give way to hard but prudence decisions.

Sadly, “programs similar to SustiNet” don’t exist in Massachusetts or Hawaii or anywhere else. So that comparison is entirely misleading. Massachusetts, for example, made a point of just going after “access.” SustiNet targets access AND cost AND quality. It’s all there in the bill, mate. Give ‘er a read.

In five consecutive CBIA small business surveys (check out their fly Website!), owners listed health care as the number one cost factor that kept them from growing and hiring new workers. NOT taxes. Skyrocketing health care costs. So SustiNet=jobs, jobs, jobs (and small businesses create 85% of new jobs in CT, BTW). You don’t cut the deficit by killing job growth. Or by ignoring health care reform and sending all our newly unemployed, uninsured residents to pricey emergency rooms at OUR expense.

Whoever takes on Rell (if Rell dares run again), they’ll be fighting the “Enemy of a Healthy Connecticut.”

Don Pesci said...
This comment has been removed by the author.
7:35 PM

Don Pesci said...
This comment has been removed by the author.
7:40 PM

Programs like SustiNet must rely on sanctions to force employers to provide insurance to their employees. Obama’s national SustiNet program, for instance, punishes non-compliant employers through a tax levy of about 8%. I think we can assume that employers not presently offering insurance because they cannot afford it will not be in a better financial position once such sanctions set in. Big companies that already offer such programs need not worry about any of this; they will survive. CBIA is made up of such companies. It’s the little people that will either cut back on employees and services or go broke. The Democratic Party used to care about such people. But I have an idea how to rescue them -- through an application of the progressive principal: to each according to his needs, from each according to his means. Why don’t we take that 8% and collect it from the members of CBIA?

Can I depend upon you to support this non-Reaganiste idea when CBIA rejects our plan on the grounds that it smacks of Marxism?

Your post is about the Connecticut state reform law known as "SustiNet."

But your response to my comment eats its own GPS and gets lost from the get-go. You start talking about "programs like SustiNet." There are none. Then you start attacking (your understanding) of FEDERAL reform proposals. See - that's a whole different topic. Different subjects, different predicates, different pronouns, etc. If you can stay on-topic, I'd love to dialogue with you.

If not, dump the "comments" feature of your blog.

The comment was in part tongue and cheek. Sorry you had some difficulty negotiating the humorous speed bumps.

I do not see how it is possible to have a definitive discussion of SustiNet because the program has yet to be fleshed out, and devils are always in the details.

This is what we know: the bill passed over Gov. Rell's veto creates a panel to develop a plan. The program will cost upwards of $1 billion per year. The state legislature has no plan to pay for the program. Juan Figueroa, president of Universal Health Care of Connecticut, has cautioned that the final plan must capture any federal money that becomes available, and its contours therefore must be compatible with the federal program, which is yet to be fleshed out. The makeup of the board fashioning the plan has been called into question by the governor's office, which has noted that it lacks representation from hospitals, the insurance industry and the business community, all impacted by SustiNet.

These imponderables -- but most especially the state's hobbling economy and its looming $9 billion deficit -- make a rational discussion of SustiNet nearly impossible. In the column and blog post I said what could reasonably be said given the ever changing background.

My suggestion would be to wait on the plan the board may present to the legislature before we roll out our arguments for and against. And I notice, according to a late story in the Hartford Courant, that Mr. Figueroa agrees with me: "If the state were in a better financial circumstance and the economy were better, we could have perhaps done this in a way that more concrete steps could have been taken to implement this approach."